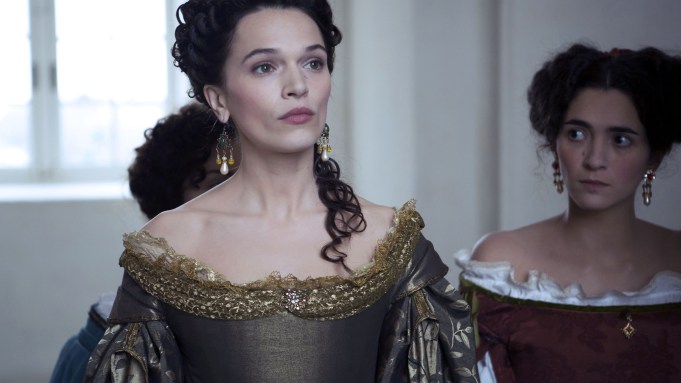 Madeline Fontaine is a master costume designer, best known for the films “Amélie” and the recent “Yves Saint Laurent.” Now she’s bringing her deft hand to “Versailles,” which aims to do for the court of Louis XIV what “House of Cards” did for Washington. Promoted as the most ambitious French TV series, “Versailles” will air on pay TV channel Canal Plus in November. The English-language series has already been sold abroad, including to BBC Two in England and Super Channel in Canada. Talks are afoot to bring it to the U.S.

Fontaine’s challenge was in adapting and modernizing lavalieres, jabot neckwear, suffocating girdles and other 17th century period pieces for a modern TV series. During Paris Fashion Week, WWD caught up with the designer.

How did you come up with the idea for the costumes?

I researched literature and paintings on the 17th century and adapted the costumes to today’s bodies, made them lighter, more livable for the actors. So dresses come with girdles, but they are more flexible. Women then were wearing wooden “busks,” a type of girdle that was the central piece of the corset and went from the chest to the belly. It could also be in bone or metal. It was pure architecture. I didn’t make replicas of these. I would have made enemies.

What were the main challenges you encountered?

Dresses required around 10 meters of fabrics each, same for the men’s costumes, which were made of three pieces — justaucorps, pourpoints and culottes. So we spent a lot of time sourcing fabrics, across France and Europe. Fabric-makers in France are closing down, so it was hard to find enough. We wanted great-quality fabrics. We did about 100 costumes ourselves. For extras, we created prototypes and manufactured them in series, providing the fabrics. There were around 200 of those, requiring miles of varied fabric.

Also, we got the cast very late. We had to strengthen the team at the end. There were 30 of us working full steam in the workshop two weeks before the beginning of the shoot. You can always imagine a 36 size, but a 36 doesn’t fit anybody. It has to be made-to-measure. We had to work on a just-in-time basis, since we only had the script for the first two episodes in advance. There were battalions of Spanish soldiers popping up in the storyline. And to add to the difficulties, they were to be stained with blood, shot and jagged so we created them ourselves. It would have cost a fortune to pay for the damage on costume rentals.

What were the most lavish costumes?

For the main characters, we assembled embroideries and lace. For official occasions, the king wore embroideries that were made with silver, gold and gems. There’s the red, blue and gold garment, the monarchy’s colors. For these, it was important to be faithful to historical imagery. His reign was based on pageantry.

For other pieces, I allowed myself some freedom with history. In 1661, when Louis XIV ascended the throne, style was ridiculous to a contemporary eye: Men were wearing “rhingraves” — like culottes, short boleros, cascades of lace — so I slipped and set it a few years later. I’m trying to take the spectator to the era.

To do that, you must be attentive to every little detail, right?

Yes, it’s a series where characters get undressed quite often….Women were wearing three layers of skirts, coined “la discrète,” “la friponne” in silk and “la secrète,” which was quilted, from the above to the under side.

Mathilde Humeau did wonderful work. It was all about white powder, pink cheeks and “mouches,” [or beauty mark]. Depending on where they were set on the face, it meant something different. We didn’t go crazy on the latter because it can be perceived as caricature.

Louis XIV had thick hair. When he started losing it, he wore wigs scattered with his real hair. Exuberant wigs came a bit later, in the late 1670s. They are higher, curlier and even horn-shaped for men. Maybe for season two!