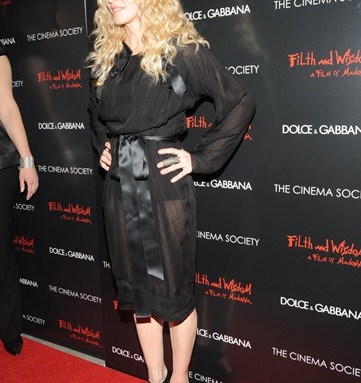 Madonna followed up a four-night stint at Madison Square Garden with a premiere for her movie “Filth and Wisdom.” Thrown by the Cinema Society and Dolce & Gabbana at the Sunshine Cinema, the screening and after party at the new Thompson LES attracted Jessica Alba, Jerry Seinfeld, Lohan, Marc Jacobs, America Ferrera, Naomi Watts and Liev Schreiber. Nonetheless, the new director was none too pleased by the few empty seats in the auditorium (“I’m used to much bigger crowds than this, that’s all I have to say,” she grumbled) and then launched into a speech in which she took after anyone who might have given her a nasty review.

“There’s a certain resentment when people do one thing well and then try to do something else,” she said. “And everybody gets a bug up their ass. But that¹s their f–king problem.”

As for her impending divorce from Guy Ritchie, confirmed Wednesday, it didn’t come up — reporters were told beforehand not to ask her personal questions.