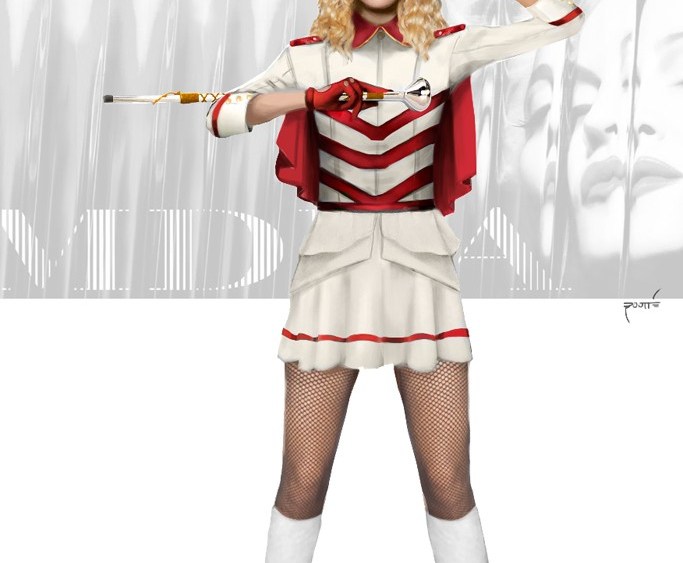 Throughout her long career, Madonna has enlisted the world’s top designers, most famously Jean Paul Gaultier, to collaborate on the costumes for her globe-trotting tours.

She’s again recruited a murderer’s row of fashion talent for her latest, the “Rebel Heart” World Tour, named after her 13th studio album of the same name.

On Wednesday, she revealed exclusively to WWD the designers who made the cut, including Jeremy Scott and Alexander Wang. And add Madonna to the Alessandro Michele fan club: the Gucci creative director also pitched in.

Just like she’s been teasing her setlist on Instagram for months — yes, “Vogue” and “Holiday” will make appearances on the tour — Madonna has also been posting snippets of looks she’s been working on with her longtime costume designer, Academy Award-nominated Arianne Phillips.

Ahead of the tour’s opening in Montreal on Sept. 9, she is revealing the full list of designers today: Fausto Puglisi, Prada and Miu Miu, Swarovski and the Lebanese designer Nicolas Jebran are the others. She’ll show sketches at a later date.

The pop singer’s predilection for some of these names has been evident for a while: she wore Scott for Moschino to the Costume Institute gala in May, on the red carpet as well as to various after parties, for instance. And she was also in full Moschino regalia in her last video, “B**ch I’m Madonna,” where Wang made an exuberant cameo. Before that, she was spotted around town wearing the platform moon boots from Wang’s fall show, practically straight off the runway.

Curiously, Versace, in whose 2015 advertising campaign Madonna appeared, is not involved in this tour. Phillips, who has been nominated for two Oscars, including her work on Madonna’s own “W.E.,” is marking her sixth tour with Madonna and will also contribute costumes.

Some of the other designers, though, like Michele, are more surprising, underscoring the singer’s knack for spotting new talent.

Long before pop acts fraternized with fashion designers, it was Madonna who asked Gaultier in 1990 to design costumes for her famous “Blonde Ambition” World Tour. He delivered the now iconic coned bra and the two have since collaborated on several tours, on 2001’s “Drowned World,” 2006’s “Confessions” and 2012’s “MDNA,” which included a reinterpretation of their best-known garment.

Previous tours included costumes from Karl Lagerfeld for Chanel, Dolce & Gabbana, Prada, Christian Lacroix — he designed the crystal-studded corset that opened the “Reinvention” tour in 2004 — and Riccardo Tisci, who designed the costumes the singer wore during the halftime show at the 2012 Super Bowl.

“People say everything has a limit,” Tisci told WWD at the time, “but limits do not exist with Madonna.” With today’s news, that still seems to be the case.