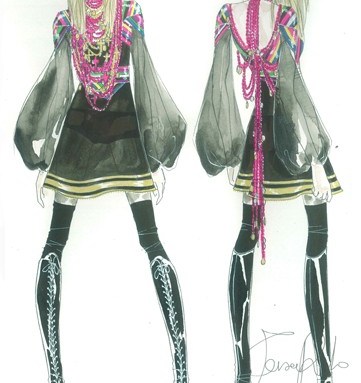 Most people are lucky to work with Madonna once. Costume designer Arianne Phillips has lasted 11 years, from the singer’s Pre-Raphaelite look for “Ray of Light” to the urban cowgirl of “Music” to the Patty Hearst look of “American Life” and on and on and on. In other words, measured in Madonna time, Phillips is roughly 77 years old.

Still, La Ciccone’s upcoming “Sticky and Sweet” tour has had its own unique challenges for her longtime stylist. “Normally we prep in April and May, and open in June,” says Phillips. “This time, the tour begins in August. It’s a nightmare. Everyone in Italy and France is on a beach sunning themselves.”

Thankfully, everyone is a bit of an exaggeration, as Phillips goes on to detail a mile-long list of willing collaborators and everything they’ve designed for the trek, which begins Aug. 23 in Cardiff, Wales, and comes to the United States in early October. Givenchy’s Riccardo Tisci designed two outfits, while Tom Ford provided bespoke suits for the band. Three pairs of shoes have been custom-made by Miu Miu, there are thigh-high boots courtesy of Stella McCartney, sunglasses from Moschino, and other outfits and odds and ends from Yves Saint Laurent, Roberto Cavalli, and Jeremy Scott.

As in the past, this tour will be divided into four sections. The first references gangsta pimp and Art Deco with Givenchy costumes. This, it would seem, is Madonna’s current take on her longest-running fashion inspiration — the dominatrix. “It’s a theme that runs throughout her career” Phillips says. “She’s not afraid of being hard.” The second section has been termed “Old School,” and harkens back to Madonna’s early days in New York, with Scott’s outfit and some vintage prints from Keith Haring, the late graffiti artist and friend of Madonna who died of AIDS in 1990. “He and Madonna were friends. If he were alive, it would be his 50th birthday as well. So I thought, ‘What if we revisited that?’” Afterward, there’s a gypsy section with more costumes from Givenchy. “Riccardo’s a new young talent. If you look at Madonna’s history with fashion, that makes him an obvious choice.” Finally, there’s a futuristic rave section with lots of Japanese influences.

And while The New York Times complained recently about Madonna’s style choices, Phillips says getting older has had little effect on her sense of fashion adventure. “She always wants to push the envelope. There are no vanity considerations based on her age.” As Phillips adds seconds later, “She looks good in everything.”