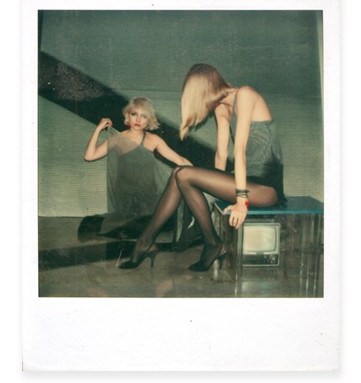 Virtually no designer is quite as synonymous with the Eighties as Stephen Sprouse, the Indiana native who served as the style czar to Deborah Harry and did as much for Day-Glo colors as every toy manufacturer combined. On the heels of a new coffee-table book by brothers Roger and Mauricio Padilha, “The Stephen Sprouse Book,” for Rizzioli, a retrospective at the Deitch Projects, and the release of even more Stephen Sprouse-Louis Vuitton merch, his friends and colleagues recall the late designer/artist, who died of lung cancer in 2004.

Dennis Christopher, colleague at Halston: There were three design assistants at Halston — Stephen Sprouse, Bill Dugan and myself. We made everything from luggage to eyewear to sheets and towels.

Bill Dugan, Halston colleague: You knew from the start that Stephen had talent. His sketching was amazing. But he was kind of awkward the first few years.

Karen Bjornson, Halston’s fit model: One day, Barbra Streisand called, and Stephen was always a huge fan. If you look at Stephen’s own collections, at the eyes, all the models have her makeup. But Halston had a rule that he didn’t bring his collection to anyone. They had to come to him. But Stephen took the call, or heard that she’d called, and decided to bring the clothes to her hotel room, where he took measurements and put the order in. Of course, Halston then heard about it and was not happy. He really let Stephen have it.

Christopher: We’d stay late and smoke marijuana and turn the music up really loud and Stephen would draw. That was what we did while the king was away. We also used to sneak clothes out for Debbie Harry to wear. She wasn’t famous yet and a couple times we got in trouble for that.

Anna Sui, designer: I would always see him at CBGBs or Max’s Kansas City. The Mudd Club after that. He liked Patti Smith and the punk bands. New York punk was not spiky hair and studs and kilts. It was very pared down. Stephen was a minimalist. That’s what he learned from Halston. He got the elegance of that and then put in his rock aesthetic and turned it into something else.

Deborah Harry, rock star: One of the things that put Blondie on the map was “Heart of Glass,” which crossed over. Stephen art directed the video. Well, at that point, crossing over was not hip. It was foul play and corruption and a lot of the rock ’n’ roll people were disgusted. But Stephen got it. Because his own taste was hardcore rock ‘n’ roll, and yet he was part of the fashion world.

Candy Pratts Price, fashion editor: We all moved to 58th Street. Debbie was in the penthouse, we were on 10 and Stephen was on two. He had a wonderful apartment. The walls were silver and he had the first color Xerox machine I’d ever seen in an apartment. It was the size of a refrigerator.

Harry: It was absolutely huge. We used it for the traditional reproduction of body parts. Steve did art with it.

Pratts Price: What was the wildest thing he made me back then? A pair of black gloves that he graffitied with Day-Glo colors, so that when we went to a club together, he could find me in the crowd whenever I was dancing. I’d just put my arms up and it was like announcing, “Here I am.”

Christiaan Houtenbos, hairstylist: Stephen was actually clean by the early Eighties. He got out and he never went back. All that was left was iced tea and cigarettes.

Paul Cavaco, stylist: Sprouse did the first big show at the Ritz because he wanted it to be like a rock concert. At that time, shows were done on a runway and the girls were, at most, 2 feet up. This was done the exact height of the stage, so the entire thing was over your head and everyone had to stand. It was chaos. It felt like a million people, and it wasn’t even fashion people. Editors were left outside because we couldn’t get them in.

Julie Mannion, show organizer: The fabrics were amazing and the cut was incredible. There was nothing sloppy and that was the dichotomy of it. It was the inspiration of the street but done at almost a couture level.<

Roger Padilha, Sprouse biographer: At that point, Stephen could do no wrong with the fashion crowd, but he was employing 35 people and he was having production problems. At the time, Day-Glo zippers weren’t readily available. Everything had to be custom-made from the buttons to the zippers to the linings. It was very expensive. Invariably, the clothes came in late, and stores would cancel their orders.

Patricia Field, designer and stylist: The problem was also that the ones who could afford it couldn’t wear it, and the ones who could wear it couldn’t afford it. After the bankruptcy [in 1985], there was an auction. I went there with two kids from the store. We bought tons of stuff and put on a huge sale. I wouldn’t buy anything for over $10, but you’d be amazed at how much stuff we got. You weren’t happy for his bankruptcy, but you were happy to get the clothes at affordable prices.

Roger Padilha: Andy Warhol gave him some paintings that were seized, so Andy went down to the auction, bought the paintings back and gave them back to Stephen.

André Balazs, hotelier: A lot of people who were close to Andy became sort of hair fixated, especially in the later days. You couldn’t tell Stephen was wearing a wig. It was very, very good.

Roger Padilha: In 1987, after Stephen got more funding, they started the Sprouse Co. It was a big comeback, but then the spring 1988 collection wasn’t well-received. The models came out with blood dripping out of their mouths and they had belts on that said “Black Monday.” Christy Turlington came down the runway smoking, and she looked like she was wasted. The clothing was gorgeous, but the presentation turned a lot of people off. By 1989, the company was shut down again.

Marc Jacobs, designer: I met Stephen a couple of times. He was always very, very shy. We didn’t talk too much, but I was a big fan. And he had two close friends, Paige Powell and John Reinhold, who is my best friend. When I came up with the idea to do graffiti for Louis Vuitton, John said Stephen would like to do it.

Christopher: When I called him to get one, they were totally sold out. Even Stephen was having trouble getting them. So he said, “Go down to Canal Street and get the regular monogram. I’ll graffiti it for you.”

Kim Hastreiter, editor: After that, he went to do a collection for Target. They loved him, but Stephen hated sunlight and at Target, everyone’s in the office at 8 a.m. So there’s Stephen in Minneapolis, getting up at 5 p.m. and getting to work at 6. Eventually what they did was that they had one woman who would go home, feed her family and then come back with her kids at 8 to meet with him. He did fabulous stuff. He did skateboards, boogie boards, blow-up furniture, flip-flops, bathing suits, T-shirts. But he kept trying to sneak in Day-Glo Speedos and they were just like, “No.”

Nuala Boylan, gallerist/close friend: One day, he called me from the hospital and said, “They told me I have three months to live.” He had lung cancer. I knew the head of Dana Farber, so I got Stephen in. They tried everything. He fought for his life, he fought really hard, and he did really well. After about a year, he went to Argentina to get away for a little bit. He called me when he got back and we arranged to have dinner the next night. Afterwards, I went to sleep and I remember hearing the phone ringing, and I didn’t go to answer it. The next morning they called me and said he was dead. He’d had a heart attack.

Christopher: It was arranged for him to be cremated, but there wasn’t a lot of dough and the boxes, in addition to being hugely expensive, were horrendous. They were mainly plastic and copper things you think of for your grandparents. But there was one coffin that was thick cardboard, and we put him in with an Edie Sedgwick Day-Glo T-shirt. After the service, we put the top on the box and took magic markers and everybody graffitied it with messages to him. He would have loved it.