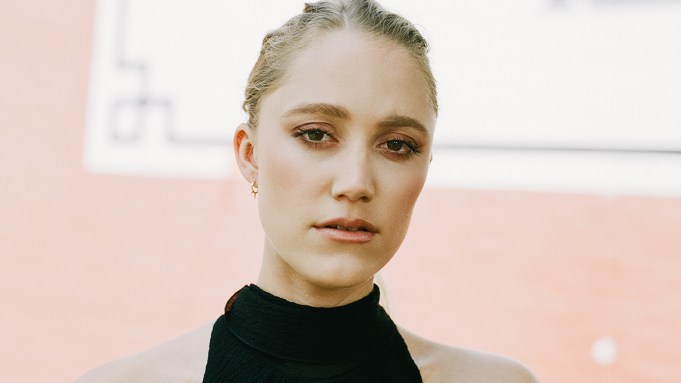 Maika Monroe’s career has taken her all over the map. In the past few years, the SoCal native has been to Serbia, Atlanta, Dublin, Iceland and, as her Instagram recently shows, Colombia. But for the moment she’s chilling out in Los Angeles, posing in polka dots and furry coats from Truth Path yoga studio in Santa Monica, the new Drake album blasting.

Following her breakout lead role in David Robert Mitchell’s indie-horror “It Follows” in 2014, Monroe’s projects have ranged from a big-studio film (“Independence Day: Resurgence”) to everything in between: a Western, a techno-thriller, surfer drama and Watergate biopic. And with a slate of high-profile releases ahead, the 25-year-old shows no signs of slowing on her upward trajectory.

Her latest is the nostalgic summer thriller “Hot Summer Nights,” out July 27, opposite wunderkind Timothée Chalamet.

“I was sent the script and immediately after finishing it — I don’t normally have this response — but I was just like ‘I have to meet the person who wrote this,’” says Monroe of the film, which was written by first-time director Elijah Bynum; the screenplay entered development after landing on The Black List in 2013. “He had just seen ‘It Follows,’ and so when [I] reached out he was superexcited to meet. And so we went and had coffee and I was like ‘I want to do this movie. I’ll do anything,'” she continues. “And no one was attached to it at the time — no other actors were involved.”

With Monroe signed on, the team set out to find an actor who would click with their female lead. That was 2015 — Chalamet was 19 years old, pre “Call Me by Your Name” fame, and rather unbelievable as a love interest upon first sight, at least to Monroe.

“I think Timothée was the last person to come in, and came in, you know, superskinny and young. And initially I was like, ‘Oh, I don’t know if, like, we’re going to have chemistry or if we’ll be able to pull off him being my love interest,’” she says. “And so we started doing some of the scenes, and I think just everyone in the room could tell — it was like ‘Oh, OK, this kid’s got it.'”

While filming in Atlanta, the director and cast — which swelled to include Alex Roe, Maia Mitchell and Emory Cohen — opted to lodge together in a “creepy, old house — big, very odd,” as Monroe recalls.

“We were just like, ‘should we just all put our money together and just get a bigger house that has a swimming pool?'” she says. “I think one of the most important things in a movie is relationships. If you didn’t believe the relationships, I don’t really think you have anything,” she continues. “All these people in this movie have become such good friends of mine, so having a movie that captures the time when we all met each other and all became friends, and it’ll be there forever, is kind of a cool thing.”

Despite her early buzz, Monroe is just getting started. This fall she’ll star in “The Widow” alongside Chloë Grace Moretz and Isabelle Huppert, followed by dramedy “After Everything” with Marisa Tomei and Gina Gershon. Earlier this summer, she wrapped filming for “Honey Boy,” which she stars in opposite Lucas Hedges and Shia LaBeouf, who wrote the film based on his own life.

“I read a lot and I just try to find good roles,” says Monroe of her role-selection process, which has kept her from falling into an early genre trap. “None of it’s planned with our jobs, you know? You have no idea what script is going to come in next, or what’s going to do well or what people are going to like. So it kind of just happened for me, these movies came out back-to-back and people really enjoyed it, which is awesome. Keep challenging yourself, keep learning, keep getting better — that’s the goal.”