City Chic was the dress code for the Museum of the City of New York’s annual benefit. 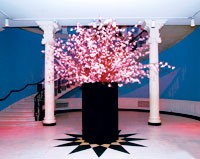 The Museum of the City of New York was Gucci-fied Wednesday night for its annual benefit, New York After Dark. The invitation called for “City Chic — No Ties” and, sure enough, Nina Griscom, Helen Schifter, Valesca Guerrand-Hermés, Tara Rockefeller, Alex Lind Rose and a host of young partygoers came tieless to gape at the sleekly made-over museum uplit in pink light: the 500-blossom orchid tree in a 6-foot steel vase placed in the foyer that resembled a cherry blossom; the many pink luminary candles; the white custom-made couches, and, naturally, the Gucci-esque waiters and door boys. Though the ladies weren’t sure that the Gucci gowns quite meshed with their idea of themselves, word around the party was that their husbands were pleased.

The big news of the evening was that Celerie Kemble and her longtime boyfriend, fund manager Boykin Curry, had gotten engaged. (He proposed while they were in the bathtub.) Kemble showed off her new ring, designed by James de Givenchy, to friends before asking if anyone had seen her fiancé. He happened to be right behind her.

“You get engaged to someone and then you just walk right by without seeing him,” a friend told her.

“I’m not keeping such close tabs on him anymore,” explained Kemble.

The ceremony will take place next March in Palm Beach. “We’re going to see what’s left of it,” Kemble added. “We might have to have our wedding in a mud pit.”