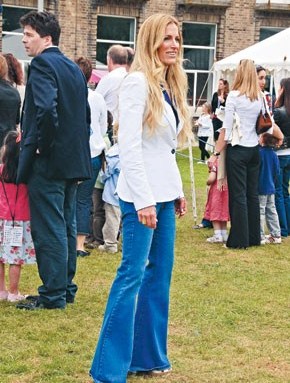 “Hold on, I need to take a picture of Spiderman,” said Maria Hatzistefanis as her son Aris, his face painted to look like the superhero, mugged for the camera. Hatzistefanis had arrived en famille to Ralph Lauren’s summer garden party in London to celebrate the beginning of Wimbledon Saturday, which marked Polo Ralph Lauren’s third year as the tennis tournament’s official outfitter.

The picnic, to benefit the charities Clic Sargent Cancer Care and Kids at Heart, was a full-on family affair, with face painters, carnival games and a miniature train that chugged around the grounds of Froebel House, a handsome 18th-century estate near the tennis tournament.

Recently retired British tennis star Tim Henman played host and rallied on the kids’ tennis court with Boris Becker. “That was out,” protested Becker jokingly at one of Henman’s volleys. But it was the children playing alongside the pros who seemed to take the match more seriously. Becker’s son Elias furiously whacked the foam balls out of bounds.

Grown-ups including Tamara Beckwith, Saffron Aldridge, Allegra Hicks, Andy and Patti Wong and Helen and Tim Taylor milled about the lawns sipping Pimm’s and nibbling mini smoked salmon sandwiches. They also placed bids for prizes in a silent auction, which included a day pass for Wimbledon, a trip to New York to see Ralph Lauren’s fall 2009 runway show and a tennis match against Henman. Camilla Belle had just arrived in town from the States that morning. “I’m here to watch Wimbledon,” she said. “I’ve never been before.”

Meanwhile, Kim Sears, girlfriend of British tennis champ Andy Murray, looked longingly at the trampoline, saying she would have tried it if it weren’t for her ruffled chiffon cocktail dress. “We’ll have to get someone to lend us their trousers,” she said to a friend.