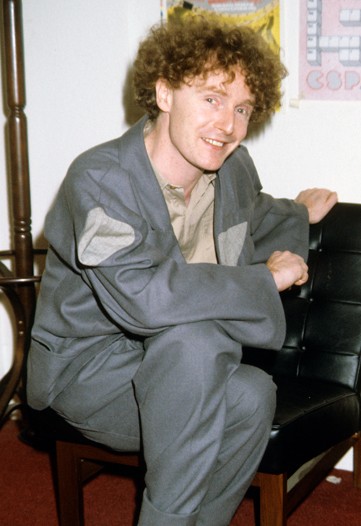 Malcolm McLaren, who helped turn the Sex Pistols into a cultural force called punk, and with Vivienne Westwood, created a fashion movement to go along with it, died Thursday at age 64.

McLaren had been ill for some time with cancer and died in Switzerland.

In a statement, Westwood said, “When we were young and I fell in love with Malcolm, I thought he was beautiful and I still do. I thought he is a very charismatic, special and talented person. The thought of him dead is really something very sad. We hadn’t been in touch for a long time. Ben [Westwood] and Joe [Corre, McLaren’s son] were with him when he died.”

To call McLaren’s career eclectic is an understatement. He was at various times — or at the same time — an entrepreneur, a music promoter, a retailer, a designer and a filmmaker, flitting from one thing to the next as quickly as his thoughts poured from his brain. Even his unruly penumbra of pale red hair seemed to project his wild creativity, as if his thoughts and ideas sent off electric sparks.

“Malcolm was a forward thinker,” said onetime paramour Lauren Hutton. “We were having breakfast one morning and it had just been announced that Prince Charles was marrying Lady Di. He said, ‘He could have been somebody. If he married an African princess he could have done in racism like that.’”

As McLaren told W magazine in 1985, “I’ve always been known as a troublemaker.”

But the idea for which McLaren would be most known would be punk. In the mid-Seventies, a little-known band called The Strand hung out at the shop McLaren and Westwood operated on King’s Road — Too Fast to Live, Too Young to Die — which had replaced their earlier store on the same street, Let It Rock, which they had taken over in 1972. It was a seat-of-the-pants venture and Westwood, a former schoolteacher who met and fell in love with McLaren, would sit in the back stitching clothes as fast as she could while he ran the front of the shop.

“I persuaded Vivienne to give up teaching, buy a sewing machine and sew up all these extraordinary T-shirts I wanted to design, to couple with the selling of these records,” he told WWD in 1983.

“I got into clothes because of Malcolm,” Westwood admitted to WWD a decade later, “but I was always good at making things.”

McLaren had already moved into the music management business when, on a trip to New York in 1972, he met The New York Dolls and took them under his wing, providing them with stage clothing — including their provocative Soviet Communist costumes — as well. Taking on management of The Strand was a natural step, by which time McLaren had once again renamed the store Sex. The Strand would become the Swankers and three of its members would go on to form the Sex Pistols, including lead singer John Lydon, aka Johnny Rotten, and bassist Sid Vicious.

But McLaren claimed he didn’t pull together the Sex Pistols for the sake of music. He did it, he said, to go along with the merchandise in his shop at the time. “There had to be music that went with the clothes. That was the whole point,” he told WWD. “The Sex Pistols provided the sound — anarchic, shrill, garage-like. It wasn’t important that they could play. It was more important the way they dressed and how they looked.”

It was the era of Prime Minister Harold Wilson, when Britain was stuck in massive labor strife with three-day work weeks and regular blackouts. The Swinging Sixties were long gone, and Britain’s youth were disenchanted with authority and convention. McLaren and Westwood tapped into that mood, creating clothing that was safety-pinned, ripped, twisted and otherwise distressed. Mohawks in all colors of the rainbow became de rigueur, along with Doc Marten boots. The fashion was one of aggression.

So was the music of the Sex Pistols. Their most famous single was “God Save the Queen” off the album “Never Mind the Bollocks, Here’s the Sex Pistols.” But in 1979, Vicious overdosed on heroin, and the group disbanded. McLaren, always looking for an angle, would make a documentary of its disintegration, “The Great Rock ’n’ Roll Swindle.”

His fame and influence thereafter never achieved those heights. He and Westwood split acrimoniously and, as the years went by, she would bristle at his taking credit for all her fashion accomplishments, while he would insist she would have been nothing without his influence.

For instance: Westwood’s famed Pirates collection. McLaren said the idea originated when he started managing punk-New Wave rockers Adam and the Ants and realized that fans were taping — or pirating — the band’s music off the radio rather than buying albums. “I took Adam’s three-cornered hat and brought it back to Vivienne and said, ‘Make it a pirate hat,’” McLaren said in 1983.

Westwood told it like this a year prior: “When Malcolm took over a musical group called Bow Wow Wow, I began to think of pirates because I saw the group plundering the world.”

Ultimately, McLaren accused Westwood of “losing touch with the street,” his highest condemnation.

Not that McLaren was forever a punk. It wasn’t uncommon to see McLaren sitting in a London restaurant in a bespoke three-piece tweed suit, outrageously opining on everything from fashion to politics, art to music — always seeking the spotlight. He always seemed to have a new “hot” band that would be the next “big, big” thing — at one point a trio of Japanese singers who barely spoke English — and he would become involved in hip-hop, opera, disco, funk and voguing, with the most famous of his subsequent albums being the 1983 “Duck Rock.”

But for McLaren, music and fashion were always intertwined. In 1995, he started an eponymous collection for men and women that was only sold in Tokyo. “It’s very existential,” he said then, continuing somewhat presciently: “I think fashion has taken a curious turn. It’s a television spectacle now, which has changed the whole notion and given it a kind of importance and newsworthiness it hasn’t had since the Fifties or early Sixties.”

He became a constant presence at fashion shows in Paris, and even released an album called “Diorama,” musically detailing the history of the house of Christian Dior. “It’s a wonderful way of making a record,” McLaren said, sitting on the sidelines of a Veronique Branquinho show in 2003. “I’m using all that French music that surrounded [Christian Dior], all the way up to the present day with Johnny boy [John Galliano].” Designers including Dior Homme’s Kris Van Assche commissioned McLaren to compose soundtracks for their shows — his most recent was Dries Van Noten’s fall show last month.

But he’d also returned to art, which was the medium in which he was originally trained, having studied at several art colleges throughout the Sixties. “I was in art school from 1963 to 1971, when Goldsmiths kicked me out,” McLaren said in 2008. “Then I opened the shop [Sex], and that was an evolution of how to be an artist in the contemporary world.”

Two years ago, he exhibited a series of 21 so-called “Musical Paintings” at Art Basel in Switzerland. “Art has got this gargantuan appetite now,” he said. “All of the other creative mediums seem to be crumbling. It’s the last creative industry that is artist-led. The others seem more corporate-led.”

He was also developing a Broadway musical, “The Life and Times of Christian Dior,” with “Gosford Park” screenwriter Julian Fellowes.

“Now, instead of engaging with the Sex Pistols or using a shop to create artistic happenings, at my age it’s easy to concentrate on looking at myself,” McLaren said in 2008, “which I’ve needed to do for a long time.”