Male Bonding at ‘I Love You, Man’

On Friday night, Paul Rudd and Jason Segel were on hand at the Tribeca Grand for a screening of their latest flick, "I Love You, Man." 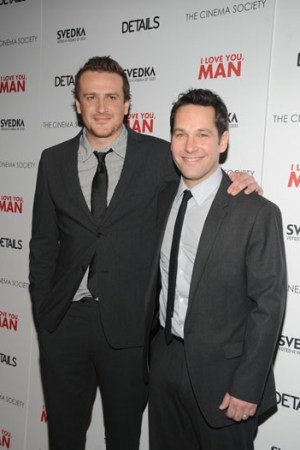 On Friday night, Paul Rudd and Jason Segel were on hand at the Tribeca Grand for a screening of their latest flick,'”I Love You, Man,’ which was hosted by Details and The Cinema Society. In the film, Rudd plays a groom-to-be who makes fast friends with Segel so that he has a best man for the big day. Off screen, the duo, who walked the red carpet in tandem, appeared just as compatible.

When asked to describe his ideal ‘man-date’ Segel said, “I’d like to wake up early and make some bacon and eggs and then head to the Turner exhibit at the Met. Then I’d like to head to McLaren’s pub for a couple of Murphy’s and some darts.”

To which Rudd responded, “This is amazing. What are you doing Thursday?” When asked about the quality he looks for most in a man, Rudd said “height”; while his 6 foot, 4 inch co-star said “extreme shortness.”

“You are a gem,” remarked the diminutive Rudd, as the two continued down the press line.

Rashida Jones, who also appears in the movie as Rudd’s fiancee, offered her take on her co-stars’ bond. “Guys tend not to talk about their feelings and over-analyze things,” the actress explained. “For them, it’s just nice to have someone there.”

Afterwards, revelers including Edward Norton, Becki Newton, Parker Posey and Steve Buscemi headed over to the penthouse of the Soho Grand for drinks and dinner.