Young, stylish and talented: the four members of the Italian band are ready to leave their mark on the European competition with a rock song, customized Etro looks and a pyrotechnic performance.

MILAN — On May 17, 2017, four unknown teens from Rome who exuded the unapologetic determination that sets those believing in their dreams apart, posted their picture on Instagram flanked by a bullish caption. “Siamo fuori di testa, ma diversi da loro…state pronti e #StayTuned,” read the message, which in English translates as, “We’re out of our minds, but we’re different from them…get ready.”

It was the fifth image on the feed, shared on the fifth day since the creation of the account, which now goes by the name “ManeskinOfficial,” has 1.3 million followers and identifies the rock band representing Italy at the 2021 Eurovision Song Contest.

Little did they know back then that exactly four years after that post, those four kids would perform in front of an international audience and repeat the same statement multiple times as the chorus of their hit song “Zitti e buoni.”

The charismatic group’s lead vocalist Damiano David, bassist Victoria De Angelis, guitarist Thomas Raggi and drummer Ethan Torchio — who have known each other since middle school and established the band in 2015 — are in Rotterdam readying their gig for the competition’s grand final, which takes place at the city’s Ahoy Arena on Saturday.

In addition to the song’s catchy guitar riff and gritty vocals, Måneskin’s stylish aesthetics and bold attitude are added attributes that are already sparking interest and drawing international attention to the band.

For instance, the video clip of the song reached roughly 22 million views on YouTube since it was released two months ago, with supportive messages and users predicting their Eurovision win piling up in the comments section, as well as on social media.

“We read everything, every comment,” David says with a smile during a Zoom call with the group on Thursday. “But we don’t feel the pressure, we just can’t wait to [perform] at the final, in front of the audience.

“And these positive comments motivate us and charge us with expectations not so much for the victory, but more for the feedback we could get even after the competition,” he adds, underscoring that the ultimate goal is to expand the band’s fan base, reaching out and attracting new people to its music.

Historically, Eurovision has been fruitful for Italian artists on the same mission, as former contestants attracting international recognition ranged from Domenico Modugno and Franco Battiato to Raphael Gualazzi and Mahmood, among many others.

If Måneskin does manage to take the trophy home as well, it would mark the third victory for Italy but the first in more than three decades, following Gigliola Cinquetti and Toto Cutugno, who won the contest in 1964 and 1990, respectively.

One of the founding members of the event, Italy made a return to the show in 2011 after a hiatus of more than a decade and, ever since, the Eurovision fever has grown exponentially in the country. International critics always praised Italy’s entries for the variety of music genres presented over the last 10 years, ranging from jazz and opera to pop and romantic ballads. Yet rock was still missing, which contributed to generating curiosity around Måneskin. 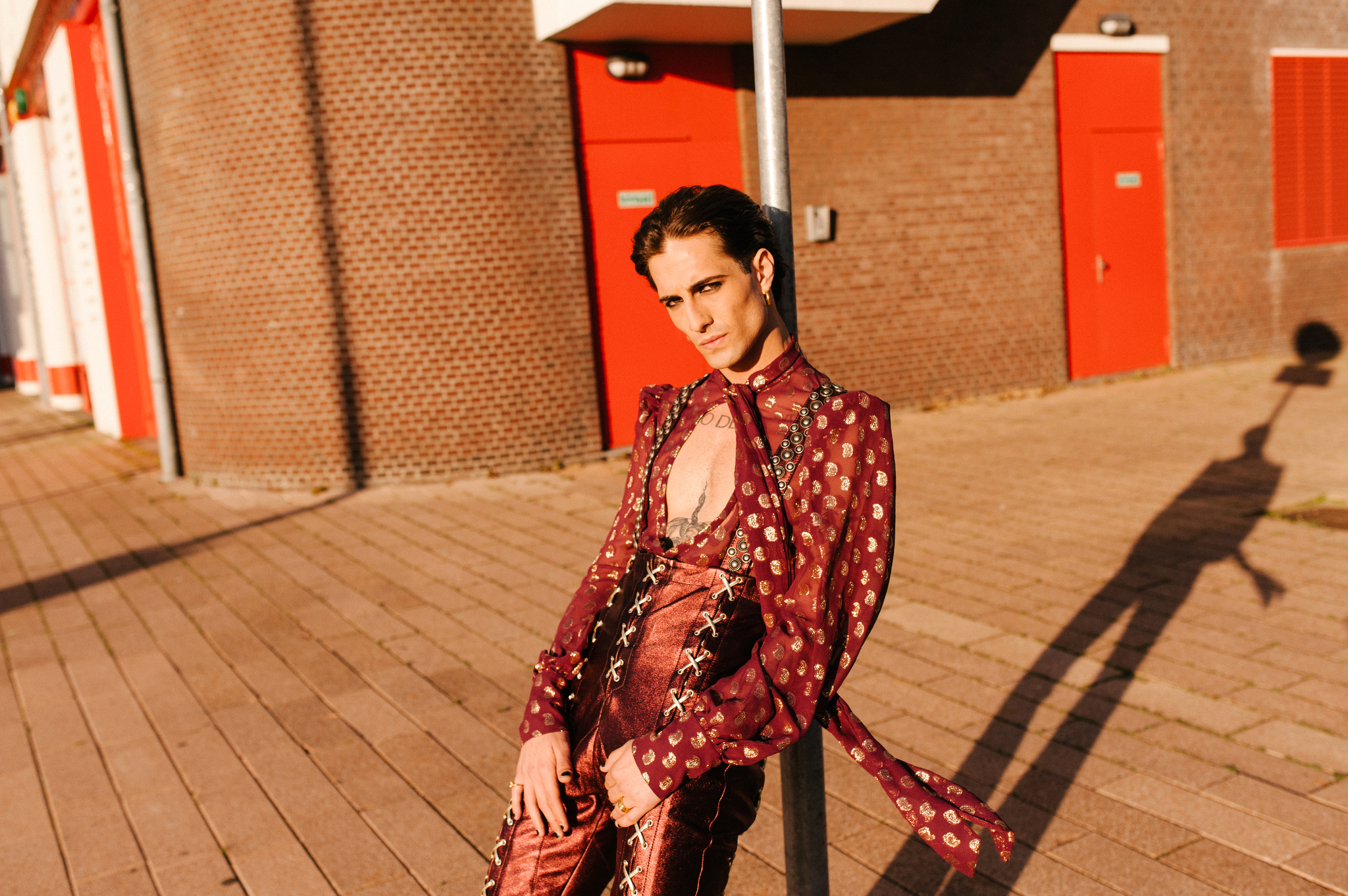 Over the past week, Italian music stars such as Laura Pausini and Fedez have added to the hype, starting to cheer the band on social media, while support also came in the streets of Rotterdam itself, with people stopping cars to wish the band luck.

“We are excited because we are having fun, there’s a very relaxed atmosphere, everything is well organized and it’s so nice to see people from other countries and talk with other artists,” says De Angelis about the experience in the Dutch city so far. “We rehearse and go on stage every day, and it’s so good to be back in front of an audience, something we were missing for almost two years now.”

In particular, Måneskin is getting ready to impress the public and leave its mark on the show with a pyrotechnic performance and rocking coordinated, customized outfits courtesy of Etro.

“The looks my brother Kean and I designed for Måneskin originated from a confrontation with the band and through the involvement of Nicolò Cerioni, who has curated their styling over the past year,” says Veronica Etro, the brand’s creative director for the women’s collections. Incidentally, this is the first time the fashion house has dressed an artist for the contest.

Channeling a glam-rock style, the outfits were crafted from laminated leather with contrasting criss-cross motifs running through flared pants, vests and a bustier. Studs in burnished metal also punctuate the looks, which were designed taking into consideration the lights and effects expected onstage, says Etro. 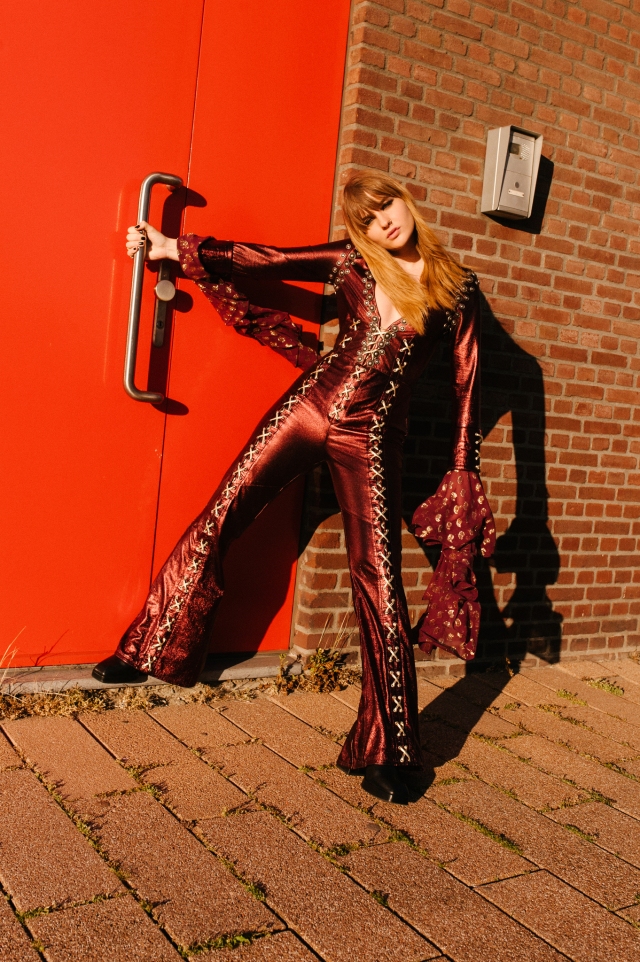 “It was a great creative process,” adds De Angelis, recalling the free exchange of suggestions between the band and the designers, who “let us express our ideas and give them our inputs.” Overall, the band takes inspiration from music icons of the past, including Jimi Hendrix and Led Zeppelin, but “fundamentally we try to have fun experimenting with looks, without setting limits but just wearing what we like.”

“We consider fashion as self-expression, and as a way of giving more strength to one’s message,” echos David. “Especially in everyday life, it also helps to find one’s own identity and place in the world, by feeling comfortable with oneself.…In our case, maybe we express ourselves better with music, but [fashion] is something we care a lot about because giving the right aesthetic to a song strengthens its message.”

In collaborating with the band, the Etros thought that adapting the same aesthetic across the band and tweaking outfits in a personal way for each member was the winning strategy. This formula already proved effective given that Etro also designed Måneskin’s outfits for the 71st edition of Italy’s Sanremo music festival in March, which the band won against all odds and therefore earning the golden ticket to Rotterdam.

On that occasion, the nude, tulle jumpsuits the band wore for the final made for a memorable moment, and quite an impression on the audience. “That’s the one we worked on the most: the guys wanted the looks to represent an intrinsic expression of freedom and chose the feather as a symbol,” recalls Etro, explaining how this brief was turned into the feather paisley-shaped embroideries embellishing the jumpsuits. 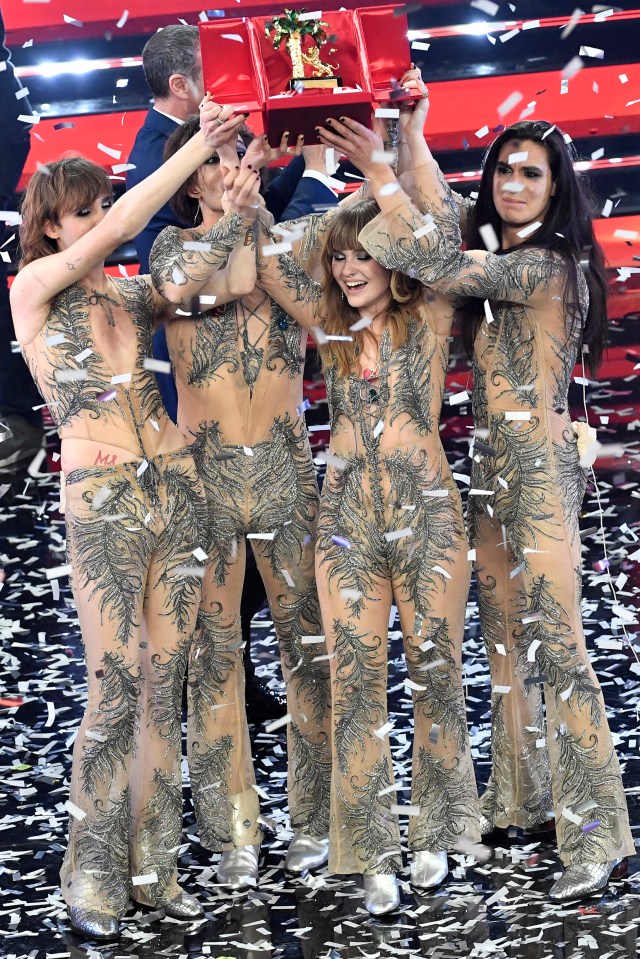 Måneskin celebrating their victory at Italy’s Sanremo music festival in 2021.  Courtesy of Etro

“Let’s say that we went a little further than our comfort zone, but with them everything is possible,” she adds. “This is a group of young and unique guys, with a rock soul hard to find in the new musical generations. We like their rebellious spirit and the freedom they express, which is in sync with Etro’s own philosophy and aesthetics.”

As a result, Måneskin never shied away from experimenting both with their looks and lyrics, rejecting labels and a homogeneous style, epitomizing Gen Zers attitude.

Both the Eurovision song and the group’s new album, “Teatro d’ira, Vol. 1,” mirrors this rebellious approach, with lyrics often centering around feelings of anger and desire to break free from rules imposed by society. “We try to fight against prejudices, stereotypes or impositions both in the musical and personal sphere, ranging from the way of dressing to sexuality,” says De Angelis.

The band is also a refreshing addition to the Italian music scene for its ability to engage with younger generations and express their values while standing apart from the abundant offer of trap, pop and indie music.

“In a way, it was a challenge and a bet, because this is an album stepping away very far from others today,” says the bassist. “We didn’t set many limits in terms of music because we wanted to do something that really represented us and that we really liked without necessarily having to homogenize, do something more radio-friendly or appealing to the general public. We wanted to be honest with our audience.” 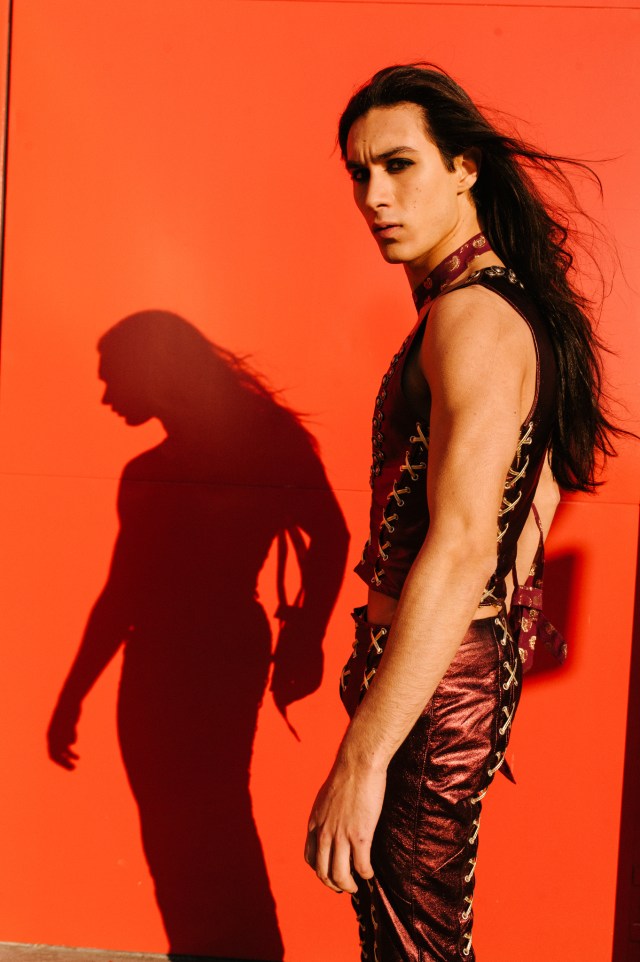 Ironically dedicated to their school teacher, who used to tell them to “be quiet and behave,” the “Zitti e buoni” hit was pivotal in sealing the band’s artistic credibility despite the members’ young ages, ranging between 20 and 22. It also empowered them to definitely shift their status from “former X-Factor contestants” to rock band.

After performing as buskers in the streets of Rome and playing at some local gigs as teens, Måneskin rose to fame in 2017 when they auditioned for “X-Factor Italia’s” 11th edition, standing out for their confident attitude while performing their debut single “Chosen.”

“I have been following the group with great attention since their debut at X-Factor,” reveals Etro. “Since their first performances I thought they had something unique and already on that occasion we had collaborated with them, dressing them for the final episode.”

Måneskin came second that year, but the debut single scaled local music charts and they are among the most successful artists in the history of the format here.

“That was really the turning point for me,” recalls Raggi. “To see the number of people exponentially growing concert after concert. We looked at each other and understood that something was happening.”

Conversely, for De Angelis and Torchio the big epiphany came even before entering the show, with the former recalling how their names started to circulate in other schools when they established the band as teens, and the latter pinpointing the first gig abroad in Denmark as pivotal moments.

After “X-Factor,” Måneskin’s commercial success was cemented with other hit songs as well as a documentary film. In 2019, the band toured Italy and Europe, registering 70 sold-out concerts, followed by an additional sold-out live event at The Dome in London, where the group also temporarily lived.

During the stay, the British music scene influenced the development of the new album, which took two years of work and marks the band’s artistic maturity. In particular, De Angelis recalls how the pandemic and the first lockdown induced the group to experiment with a new approach, shifting from writing the songs all together to taking time to develop their individual identities before combining them. 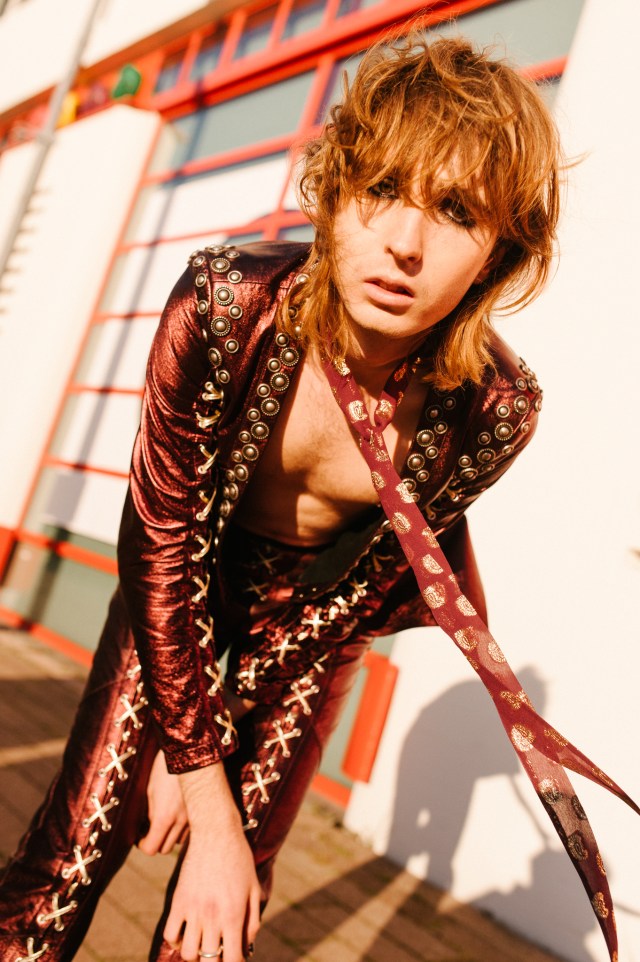 “It was also good to take things more slowly, listening again to tracks and having the time to metabolize them and make changes,” notes Raggi.

After Eurovision, the band will return to songwriting and to working on the second part of the album. A tour around Italy will start in mid-December, with dates in Rome and Milan already sold-out, and ending at Verona’s iconic Arena on April 23, 2022.

“But we hope to have the opportunity to do also a European tour, when this COVID-19 emergency will be over.…Given this experience and that different countries have started to appreciate us, we look forward to performing in their cities, too,” concludes De Angelis.

Eurovision Song Contest: A Celebration of Diversity and Fashion Extravaganza

Eurovision 2016: Alessandro Dell’Acqua for No. 21 Among Designers to Dress Contestants