The famed Western wear designer crafted outfits that reflect the traditional feel of their new record.

Wade Bowen and Randy Rogers in the custom Manuel suits.

For Wade Bowen and Randy Rogers, there was only one designer to call when they were looking for custom-made suits to wear on their album cover. His name is Manuel.

The 86-year-old Mexico-born artisan has been creating elaborately embroidered suits for celebrities for more than 60 years. His designs have been worn by everyone from Porter Wagoner and Gene Autry to Jack Nicholson, Kenny Chesney and Sylvester Stallone. So when the country artists wrapped up the work on their latest album, “Hold My Beer, Vol. 2,” set for release on May 8, they knew who to contact.

The artists are especially popular on the Texas music circuit and the album reflects that state’s unique musical sensibility — so their outfits had to as well.

Bowen said Manuel’s “reputation is stellar, and we’ve obviously seen his work. This is the style we really wanted for this project, and he nailed it.” Rogers added: “I’ve always wanted to work with Manuel. I’ve always been a fan. Getting to meet him and have him make our suits was amazing. Actually, ‘amazing,’ isn’t even a good enough word for it — more like ‘epic.’”

Bowen said they worked closely with Manuel’s staff, but ultimately “had complete and total control over what the suits were going to look like. We were hands-on the whole time.” He especially liked how “classy and old school” his suit turned out with its ornate, floral-inspired embroidery on the jacket and pants. 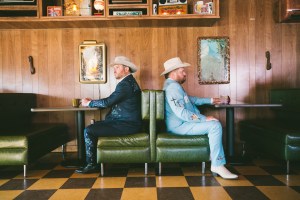 Wade Bowens and Randy Rogers will release Hold My Beer, Vol. 2 on May 8.  joshuablackwilkins

Rogers said before the process started, he knew what he wanted his suit to look like. “Powder blue and just like Ray Price,” he said. “Manuel and Ray were so close. I knew he would understand what I wanted. I had a few chances to hang out with Ray, and let me tell you — that man had some style.” Manuel added some subtle hints of Price into the jackets, including feathers and arrows that reference Price’s nickname of Chief.

The designer also incorporated personal details into the design of the garment, including Rogers’ Day of the Dead tattoo and Southwestern icons such as cacti. “There’s also a goat on mine — take it for what it’s worth. I’m not the ‘greatest of all time,’ but Wade thinks I am.”

The suits are a bit of a departure from what the singers usually wear when they perform. Bowen opts for jeans, a button-down or Western-style shirt, and a cowboy hat or ball cap. Rogers is always dressed in jeans, a cowboy hat and boots, with a shirt that “shows off my guns — by guns, I mean my tattoos. A T-shirt or a pearl snap is the usual for me.”

But the Manuel outfits were the “perfect set-up for the album,” Bowen said. “‘Hold My Beer, Vol. 2’ is chock-full of music inspired by what we grew up listening to and loving. All the songs on this project — and ‘Hold My Beer, Vol. 1’ — definitely have that traditional country sound, and when it comes to these suits, they’re also as traditional and throwback as they come. They really set the tone for the entire project’s artwork, and we’ve run with it.”

Rogers added: “Given Manuel’s history with the genre, having him create our suits just put the finishing touch on the record — like icing on a cake.”

On Friday, CMT will exclusively unveil the video for “Rodeo Clown,” a cut on the album that features both men proudly sporting their Manuel suits. But fans won’t be able to see them in suits in person anytime soon: The coronavirus epidemic has put a crimp in their plans to tour in support of the album release. But Bowen and Rogers are figuring it out.

“We are making stuff up every day,” Bowen said. “These are uncharted territories, for sure, so we have to get creative with live-streams and personal videos. We’ve really enjoyed doing happy hour Wednesdays with fans through our weekly video hang called ‘Watch This Wednesdays’ on our socials. We’re just trying to stay in touch with fans as much as possible, knowing they are in the same boat and still craving music — and we’re doing our best to give them that. Not to mention — a new album seems like a great thing to share right now.”

Rogers added: “This record has humor all throughout it, and I believe that’s a strong selling point right now because we all need a laugh — oh, and a beer.”