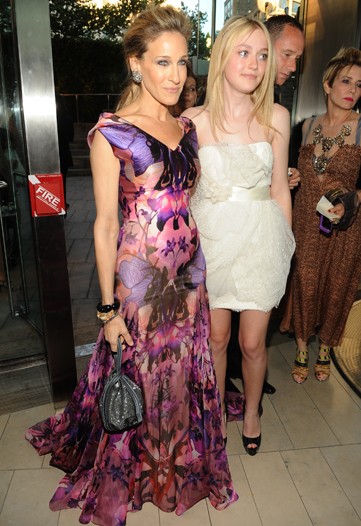 The 2010 Council of Fashion Designers of America Fashion Awards on Monday night brought together Seventh Avenue and Sunset Boulevard for their glitzy annual meeting. And it’s a creative marriage that clearly has rewards.

Actresses such as Jessica Biel, Dakota Fanning, Rachel Weisz and Kate Mara joined New York designers at Alice Tully Hall for the event, which started late despite CFDA president Diane von Furstenberg’s pleas for everyone to take their seats. “We’ve been under the radar for a few years, like a stealth submarine, and now we’re surfacing,” said Simon Spurr, a nominee for the Swarovski Award for Menswear. “Having friends in young Hollywood definitely helps.”

Sarah Jessica Parker attended to laud Alexander McQueen with the Board of Directors’ Special Tribute. “I’m honored,” she said of her role. “But I’m sure [I was chosen] because someone else wasn’t available.” (In case you’re wondering how she managed to compose a speech in the middle of her demanding “Sex and the City 2” promo schedule, she said she wrote it during a 13-hour flight from Japan.)

Among the younger set, the Swarovski Award, which honors emerging talent, went to Jason Wu for women’s wear, Richard Chai for men’s wear and Alexander Wang for accessory design.

Christopher Bailey for Burberry received the International Award, Vogue’s Tonne Goodman got the Eleanor Lambert Award and Iman was honored with the Fashion Icon Award. The Eugenia Sheppard Award went to Paper’s Kim Hastreiter. Ralph Lauren won the Popular Vote Award for the second year in a row, and the Geoffrey Beene Lifetime Achievement Award was bestowed on Michael Kors.

But of all the revelers on the balmy summer night, it seemed like Kors’ date, a very relaxed Gwyneth Paltrow, was having the most fun. “I’m on London time,” she said, eating cheese straws at the bar. “I’m on my second martini, and it’s only 5 p.m.”