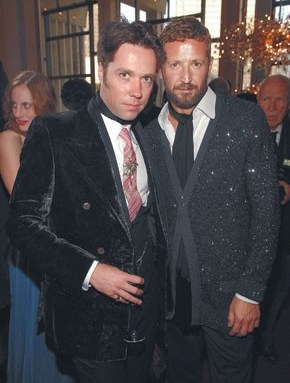 It was Opera 101 for the fashion flock on Monday night, as the Metropolitan Opera celebrated its new production of Gaetano Donizetti’s “La Fille du Régiment” with a benefit sponsored by Yves Saint Laurent — the first of four galas to be underwritten by the fashion house.

“I haven’t seen the opera ever,” admitted an excited Ginnifer Goodwin. “I was studying everything in the car over, because I was worried I wouldn’t understand it.”

“I’m researching the opera for a project I’m working on, so when I got this invitation, I thought it was perfect,” said Liz Goldwyn, who was sporting circa-1979 couture designed by the actual Yves Saint Laurent. “The construction of this gown is amazing — it’s just like the stripper costumes I collect,” she said. “There’s a zipper that goes up the middle.”

Among those wearing contemporary YSL were a slew of starlets such as Diane Kruger, Paula Patton, Leighton Meester and Emmy Rossum, as well as Elettra Rossellini Wiedemann, Anh Duong, Fabiola Beracasa and Zani Gugelmann. Designer Stefano Pilati arrived at cocktails with Naomi Campbell, another opera neophyte. “I sing, but only in the shower,” said the supermodel, looking happy and carefree, perhaps because she’s supposedly made peace with the international travel authorities. (Lucky for her, since she headed to Paris with Pilati last night to work on a secret joint project. “It’s a surprise,” she said.)

Gala co-chairman Mercedes Bass, however, is definitely no stranger to the opera, having just come off her Met debut as an extra in “La Bohème.” “Before you go onstage, you are thinking, ‘Am I going to slip? Am I going to faint?’ But then you realize that you can do it,” she professed as she headed into the dinner that preceded the premiere.

Some guests had so much fun beforehand that they got locked out of the first act. “I was in what I like to think of as a very elite, very exclusive group that got stuck outside,” laughed Margo Stilley during intermission. “They wouldn’t let us in even though we all said, ‘Do you know who we are?'” But the Lincoln Center ushers were having none of it, and sent the group of 30 — which included Mario Sorrenti and Amanda Brooks — to drink Champagne in a side room.

Actress Eva Mendes did catch the first act, which included an encore by tenor Juan Diego Florez that had the crowd on its feet. Did she enjoy it? “Yes, and now I’m enjoying my dessert,” she said dismissively, digging into her sorbet.