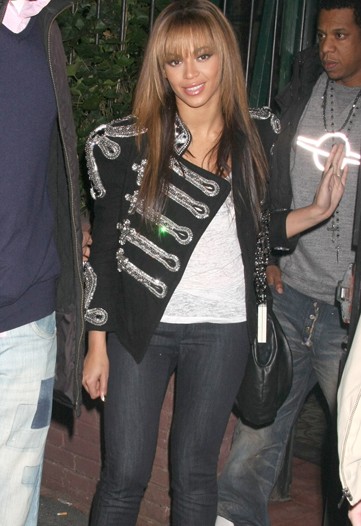 Without question, The Beatles are one of the most influential musical acts of all time, and lately the Fab Four have been having a fashion impact once again. Beyoncé Knowles, Kanye West and Rihanna have all been spotted sporting cadet-style jackets — the kind first made popular by the group on the cover of their revolutionary 1967 concept album, “Sgt. Pepper’s Lonely Hearts Club Band.” (Michael Jackson donned a similar style during his “Thriller” days, and Britney Spears is currently rocking the topper on her “Circus” tour.)

But now the look has left the stage and been spotted on the street: Knowles and model Eniko Mihalik both opted for versions with metallic embellishments to dress up a pair of skinny jeans for a night out on the town. Rihanna, meanwhile, selected a simpler version of the look (paired with white shorts) for a daytime ensemble. And the members of another four-man band, Coldplay, each selected a different color of the same style to hit the red carpet at the Grammys. Perhaps they were hoping to channel a bit of Beatlemania?

Click to view full-sized images of celebs in military fashions>>