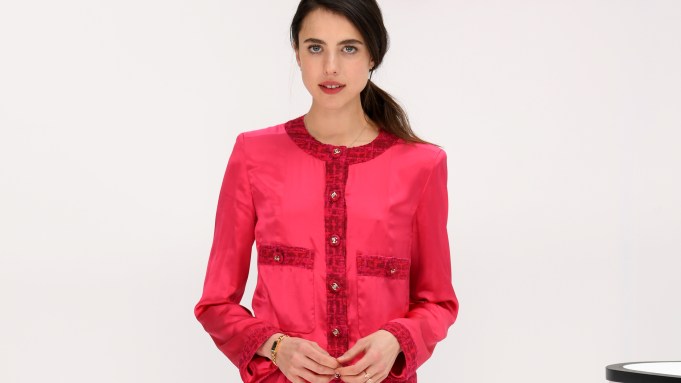 CHIT-CHAT: Two girls ambled across the cavernous hall of the Grand Palais while lightly chatting, seemingly oblivious to the crowd of the photographers and guests looking on.

“Is your boyfriend coming today?” Rianne van Rompaey asked Vittoria Ceretti as both models walked along the Chanel runway on Tuesday morning.

The light-hearted mood of the show, during which models walked along in pairs or trios, sometimes talking and giggling amongst themselves, was very much enjoyed by Margaret Qualley.

“It was so playful. I loved the girls talking to each other and how relaxed it all was,” said the “Once Upon a Time in Hollywood” actress of the spontaneous chit-chatting. “Everyone seemed like they were enjoying themselves and that was refreshing to see in a fashion show because, a lot of times, it’s so serious.”

As an actress, Qualley has had to do her fair lot of improvising.

“I quite like it,” said the actress, who this fall will start shooting her next film project, “The Stars at Noon,” directed by Claire Denis and also starring Robert Pattinson. “It’s always nice to have the opportunity to take some creative liberties here and there, but at the same time, I think it’s important to have a well-written script to begin with.”

A couple of seats down from musicians Janelle Monàe and Angèle, Maggie Rogers was reminiscing about the joys of live performances.

“I have to improvise pretty much all the time,” said the singer, whose career was launched after she was spotted by Pharrell Williams and whose debut single “Alaska” has more than 15 million YouTube views.

“I had a situation at Lollapalooza last year,” she recalled. “I was in front of 20,000 people when my computer suddenly went out in the middle of ‘Alaska.’ It had all my nature sounds and my auxiliary percussions and also triggers a lot of the changes for keyboards and stuff. Right in the middle of the song, my computer died.”

How did she react? “I led the crowd in an a cappella version of the song,” said the singer, who is gathering inspiration for her second album. “It turned out to be one of my most memorable moments of touring last year. Music is at its best is when it forces you to be present.”