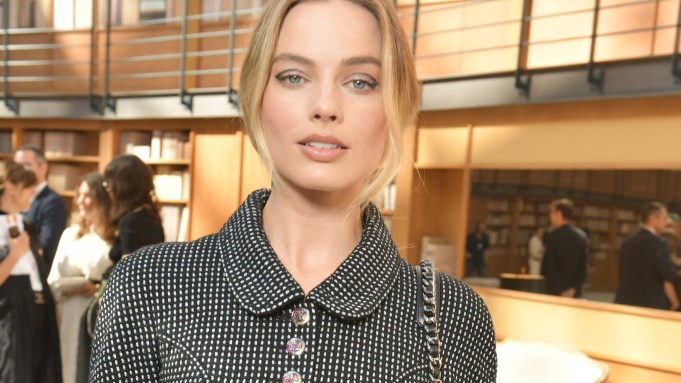 GIRLS ON TOP: A glamorous crew of supportive women turned up to applaud Virginie Viard’s debut haute couture collection at Chanel on Tuesday, held in a makeshift library at the center of the Grand Palais in Paris. Australian actress Margot Robbie was one of them.

“I have a lot of press coming up and I feel like I want to wear every single item that I saw today,” said the “Once Upon A Time in Hollywood” actress, who is set to be the face of a new Chanel perfume as part of her role as fragrance ambassador for the house. “The collection felt quite easy and effortless. When you’re doing promotion, your days are very long and you don’t want to look like you’re constricted in any way. I like to be comfortable.”

The next six months are gearing up to be quite packed for Robbie, whose company Luckychap is producing “Birds of Prey,” a film centered on DC Comics character Harley Quinn — played by Robbie, who is reprising her role from “Suicide Squad” — set to be released in 2020.

“We’re in the middle of editing that, as well as an indie film directed by a first-time female director and starring Carey Mulligan,” she said. “We also just wrapped a TV show named ‘Dollface’ created by a woman and starring Kat Dennings. There are serious girl power vibes in our office for sure.”

“I feel like we’re coming out of a period of anti-intellectualism and stepping into the age of intellectualism,” said the “The Hate U Give” actress, who is currently filming “The Eddy,” a Damien Chazelle-directed Netflix series about a jazz club in Paris.

“It felt like a commentary on womanhood, about how being a modern woman is intertwined with having a sense of self, a sense of the world and being well-read,” she continued. “I felt like I was seeing looks for women who are strong. There was a lot of pride in this collection.”

Past French actresses Isabelle Adjani, Isabelle Huppert and Adèle Exarchopoulos, British actress Ellie Bamber was taking in the impressive show set and musing about the books that changed her life.

“Recently I read Sally Rooney’s ‘Normal People,’ which was amazing,” said the “Nocturnal Animals” star, who has since dyed her Titian locks blonde and has just wrapped filming the six-part BBC drama “The Trial of Christine Keeler.” “But the books that changed my life are probably all of Fitzgerald’s: There is always an interesting tragedy at the heart of them but it’s painted with such beauty. I loved seeing the juxtaposition of those two ideas.”

There’s nothing like a good self-help book to get your creative juices flowing, according to French actress Marion Cotillard.

“A book that really changed me was ‘The Power of Now’ by Eckhart Tolle,” said the “La Vie en Rose” actress, who is preparing to film a musical comedy with French director Leos Carax. “It deals with the way we are constantly polluted with thoughts that prevent us from living life to the fullest, and in the moment.” Hear, hear.