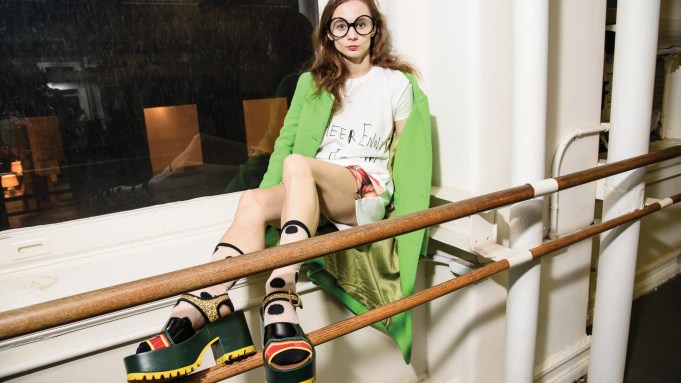 Maria Kochetkova — a principal dancer with both the San Francisco Ballet and the American Ballet Theatre — breaks from the convention of a cloistered ballerina. The Russian export is “obsessively” devoted to ballet, according to her friends, but in the after hours socially cross-pollinates herself among myriad visual art forms — while boosting that of her own.

An eccentric dresser who drapes her elfin frame in bright patterns, clashing colors and unconventional silhouettes, Kochetkova styles her hair into a doll-like side part and plasters her dainty face with oversize eyeglasses that recall those of Iris Apfel (the supplier of which she is desperate to uncover).

She moves in like-minded, jet-setting fashion and art circles, which include the likes of musician Dev Hynes, Julien David and graffiti-artist-turned-hotelier André Saraiva. When in San Francisco, she’ll jaunt south to Los Angeles for a few hours to attend dinner parties hosted by Purple magazine editor Olivier Zahm.

“You can find inspiration for what you do in art forms and people that surround you — it doesn’t need to always come from working in the studio all day. I like meeting people that inspire me to look for different things,” Kochetkova says of her artistic ethos.

“She wants to be inspired and stimulated through other mediums, and probably integrates it back into her own specialty in a way that nourishes and feeds her own creativity,” says Julien David, who counts Kochetkova as a friend and muse.

Kochetkova is particularly excited about San Francisco’s reinvigorated contemporary art scene, where this month’s opening of a new Gagosian Gallery and the unveiling last week of the renovated San Francisco Museum of Modern Art signal the city’s surge of tech wealth. “I’m happy that the money is turning into the care and appreciation of art,” she says of the socioeconomic shift, which will bring artists like Paul Klee, Joseph Beuys and Diane Arbus to a Silicon Valley-moneyed audience.

While it would appear that a good deal of her mind space is allotted to thoughts of fashion, art and film, the core of Kochetkova’s life still very much revolves around dance. She is deeply emotional about her roles and “very committed to her work to a good obsessive degree,” according to fellow ABT principal, friend and sometimes roommate Daniil Simkin. Hours are devoted to contorting her body in rehearsal studio mirrors to refine and elongate its lines.

It’s that practice, coupled with an exceptional onstage strength and bravura, that leaves many theater patrons surprised to discover that she actually only measures a slight five feet tall.

“For such a small dancer, she is incredibly powerful, she makes herself big onstage, she has a very generous way of moving and is incredibly flexible almost to a gymnastic proportion and uses that in a very artistic way,” Christopher Wheeldon, who has choreographed numerous new works on Kochetkova, says of her dancing. “She is a very curious young lady, a very interesting dancer,” he adds.

Known as “Masha” to her friends, Kochetkova’s versatility enables her to seamlessly and gracefully move between classical and contemporary works. She has been cast in a diverse range of roles for the ABT’s spring full-length season at the Metropolitan Opera, beginning May 9 — Kochetkova’s first as an official principal. For this, she will add three full-length narratives to her repertoire: “Sylvia,” “Le Corsaire” and Alexei Ratmansky’s “The Golden Cockerel.”

Kochetkova nonchalantly describes her multigenre aptitude as “necessary for being a 21st-century dancer.”

“I find this one of the most interesting aspects of my job. I feel very lucky to live in this time and work in America — I don’t have anyone telling me, ‘Oh you’re only good for this part,’ which is [the mind-set] I grew up with in Russia. [In the U.S.], I’ve only been pushed to do parts I didn’t think were right for me.”

Her diverse interests and activities are carefully documented on her social media accounts, all cheekily named @balletrusse in homage to the historical traveling company. Instagram has proven an especially powerful medium, where she’s amassed more than 139,000 followers.

On the eve of meeting with WWD, Kochetkova had Instagrammed a short video of “Star Wars'” R2D2 tipping over onto its face — likening the robot’s physical faltering to her own exhaustion. That week — in between learning the three narratives — Kochetkova had flown to San Francisco for a single evening’s performance of “Romeo & Juliet,” returning to New York the following morning to resume her seven-hour-a-day rehearsal schedule.

She appears in ABT’s Flatiron studio displaying a physical and emotional exhaustion that leaves her postured frame in an unlikely slump. The Russian facet of her personality presents itself as she trods down the hall — feet in turnout — with a gruff reserve.

Although Kochetkova is in many ways different than the typical ballerina, having grown up in the craft, facets of her personality are aligned with other dancers. Isolated? No. But artistically tempered with a near-rigidity? Most definitely. She commandeers the photo shoot in the vein of a seasoned creative director.

“She is very hard on herself but also her surroundings, which sometimes creates a conflict, but it’s always geared toward a final goal. She is very opinionated in a good way, which makes her perform at her best,” says Simkin, who adds that he would describe Masha as “having a lot of substance.”

After changing her clothing, Kochetkova walks into a studio wearing a lime green Acne overcoat, a pair of white gym shorts by Japanese label Massive Gay and a T-shirt from her own line, Koche-Kova, tucked in. She launched the line last year, hand-scrawling and screenprinting shirts with quotes by her favorite authors — Sappho, Pushkin and Emily Dickinson among them. She had the well-entrenched downtown photographer Magnus Unnar shoot promotional images. A few styles have sold out.

The majority of Kochetkova’s days are spent in rehearsal attire and pointe shoes. But in her free time, she trades her Sanshas for Acne oxfords or Marni platforms; basketball shorts and Uniqlo leotards for Jacquemus, Gosha Rubchinskiy and Julien David.

“I think she has an eccentric style; she looks at unusual fashion and is not afraid of color or print. I think she wants clothes to reflect her personality,” says David. After meeting through social media, they collaborated on his spring 2015 collection video, in which Kochetkova pirouettes on a basketball court.

“I know some people find it not normal, but for me [wearing my clothes] is just like wearing jeans and T-shirts is for other people,” Kochetkova says of her unconventional taste.

In marching to her own beat sartorially, it would make sense that Kochetkova has charted a career that also diverges from the norm.

Trained at the Bolshoi Ballet school, Kochetkova’s diminutive stature drew displeasure from more uniform instructors. Possessing an uncanny sense of self-conviction, she entered in the Prix de Lausanne youth competition without her school’s knowledge, preparing three routines that ultimately won her an apprenticeship with the Royal Ballet in London. She broke from the Bolshoi tradition in decamping from Russia at age 18 to move to the U.K. — even though she barely spoke English.

Kochetkova was not hired back by the Royal Ballet after her apprenticeship. “A lot of people give up because they get fired from their first job. I just remember how I felt — I think it’s important [for young dancers] to know that it’s not the end of the world if you don’t get rehired after your first year,” she says of the experience, which led to a stint at the English National Ballet soon after.

After spending time with that company, she was appointed principal by the San Francisco Ballet in 2007 — the audition marked her first-ever trip to the U.S.

In 2013, Kochetkova carved out time to take a rare vacation to the Venice Biennale, where she received a phone call from ABT’s artistic director Kevin McKenzie asking her to jump into the Odette/Odile role of “Swan Lake” to replace an injured dancer. “I would do class in my room every day and try to concentrate because I had to fly to New York straight from Venice,” she recalls.

Her relationship with ABT evolved, and last spring she was appointed a full-time principal dancer — in addition to her duties at SFB, she would travel the U.S. performing with an elite contingent of dancers like herself.

“It’s been very important to me because I realized I wasn’t dancing to my full potential — I wasn’t aware of it because I don’t think I was ever pushed. It was a really important experience for me. I keep discovering new things I didn’t know about myself,” she says.

With 10 to 12 years potentially left in her dance career, it seems exciting that Kochetkova is nearing the doorstep of her next chapter. The obvious choice would be for her to meld her interests into a single occupation. “I think being artistic director in a way combines so many different art forms together — there is so much potential, it could be something with fashion, filmmakers, directors,” she says. “There are endless possibilities.”