Give the People Sparkles: Inside Mariah Carey’s Vegas Residency Wardrobe

"Let's face it, she's got all the assets.” An exclusive behind-the-scenes look at Michael Costello's designs for Mariah Carey's Las Vegas residency.

Mariah Carey at the Colosseum at Caesars Palace in Las Vegas.

On New Year’s Day, while on vacation in the Dominican Republic, Mariah Carey posted a video of herself, feet dangling in her hot tub, dressed in a shimmering silver gown. Days later she was back on Instagram with more photos of the dress, but this time she was draped in the water, gown still on, in the kind of fully fabulous diva move one can only hope for from Mariah Carey.

As the story goes, she loved the dress so much that she asked her team to reach out to the man behind it, Michael Costello, and see if he might be up for creating her wardrobe for her Las Vegas residency, “The Butterfly Returns.”

“Of course, I had to pinch myself when I heard that,” Costello says, over the phone from Los Angeles in the midst of packing for his final Mariah trip to Vegas. “I was just blown away.”

The show, which opened on Valentine’s Day and closes this weekend, features five looks, all done by Costello, with the exception of an Adrienne Landau feather coat he selected for Carey. The drama begins in a black, long-sleeve, hand-beaded, appliquéd bodysuit with a sheer black chiffon skirt covered in black Swarovski crystals, a look Costello calls “all legs for days.” She then changes into a bodysuit with the Adrienne Landau ostrich feather coat, at which part Carey calls Costello on stage for a “glam moment” and he drapes the coat over her; a strapless hot pink sequined mermaid dress, Costello’s favorite, that is “totally Mariah,” and either a white or silver gown, “depending on how she’s feeling,” for a few ballads. 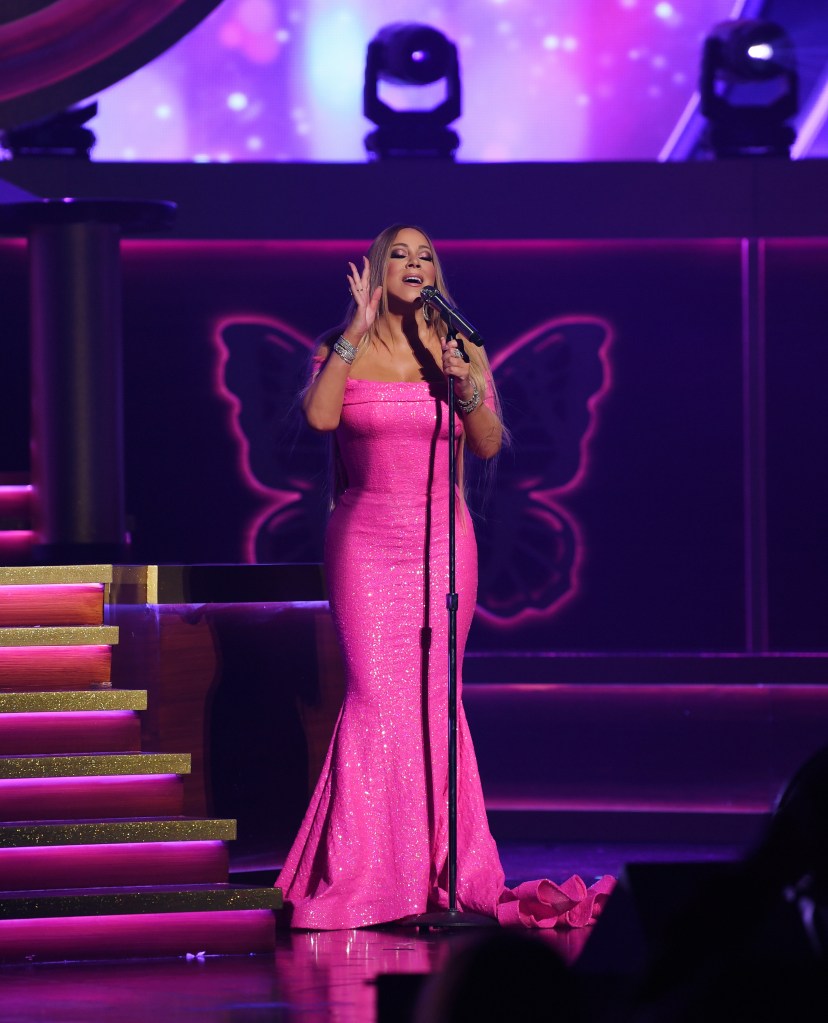 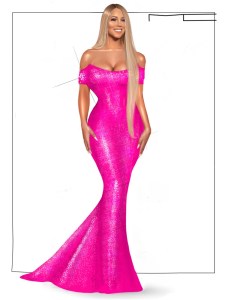 “It was a pleasure to work with Michael on these designs, as he understands the nuances of a dress that works for a performance,” Carey writes in an e-mail. “He is a wonderful collaborator and beautifully created these new, spectacular ensembles for my Las Vegas residency.”

Costello, who has previously worked with Carey on a few custom dresses for events (including the New Year’s Eve look), was also responsible for dressing Jennifer Lopez for some of her Vegas residency outfits. For “The Butterfly Returns,” the process began with a phone call with Carey, before he flew to New York to her “gorgeous, gorgeous home” to show her the initial five options he had created for her.

“Things that were going through my head were Bette Midler, Cher, Diana Ross, all the people that Bob Mackie had worked with,” Costello says of taking inspiration from Vegas. “Because it’s Vegas, we wanted to stay with sequins and stuff that has lots of stage presence and sparkle, and we wanted to keep things fitted to show off her body. She’s in her best shape right now and her body, it’s pretty much banging and she just looks great in stuff that’s more fitted and with sparkles. It’s a residency in Vegas. I think people come and they want to see sparkles.”

He took some inspiration from “classic Mariah” moments and knew he wanted to see her onstage in plunging necklines, off-the-shoulder moments, long sleeves, mermaid silhouettes — all things Carey told him she loves.

“I suggested things like fringe and oversize crystals, but Mariah was like, ‘Nope, I definitely don’t want to do fringe, especially don’t want to do oversize crystals,’” he says. “She won’t just put a dress on — she’s very into the process as far as the sketching, the fabric, the color, the cut. She knows her body so well and she knows exactly what’s going to work on her body. We’ve worked with so many celebrities before and a lot of them are like either just, ‘make it black, make it white, make it blue, make it pink.’ But Mariah knows what’s going to hit her in the right areas and what’s going to accentuate her the best. Let’s face it, she’s got all the assets.” 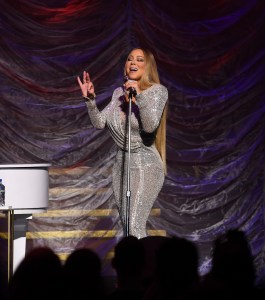 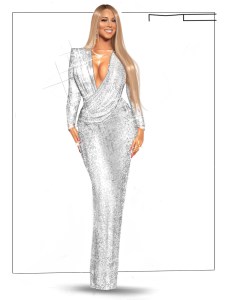 And he is adamant that even though she may like a dramatic train on a sequined gown, her diva reputation gets overblown.

“I get really upset because some stylists and some people are like, ‘Oh, she’s such a diva. Oh, she’s so difficult to work with.’ Maybe I have not yet had the opportunity to see that side of her, but the Mariah that I’ve been working super closely with is so fun, so exciting, so enthusiastic, so opinionated on the clothes. I think she’s great to work with and she’s still so extremely passionate about her music and her writing and her fans.”

Perhaps surprisingly, she also cares deeply about what her fans think of her onstage looks.

“There was a moment where we were talking about people leaving comments and I was still shocked to know that she reads the comments and she goes through every single comment to see what people are saying about the looks,” Costello says. “For one of the looks in particular, she felt a little bothered by someone who left a comment. And I said, ‘Hey, I mean, opinions are like a–holes. Everybody has one and they’re not always going to be that great. You look smoking hot and you look amazing, you went out there and did that and people are going to hate, no matter what.’”

Her fans like to tell Costello what they’d like to see her in more of as well, whether that’s warranted or not.

“I’m getting tons of Mariah texts, and texts from the fans telling me I should never put her in a flowy skirt. ‘We need to see her legs more. We need to see more boobs.’ I’m getting all of that, but I’m not paying attention to her because she looks killer on stage.” 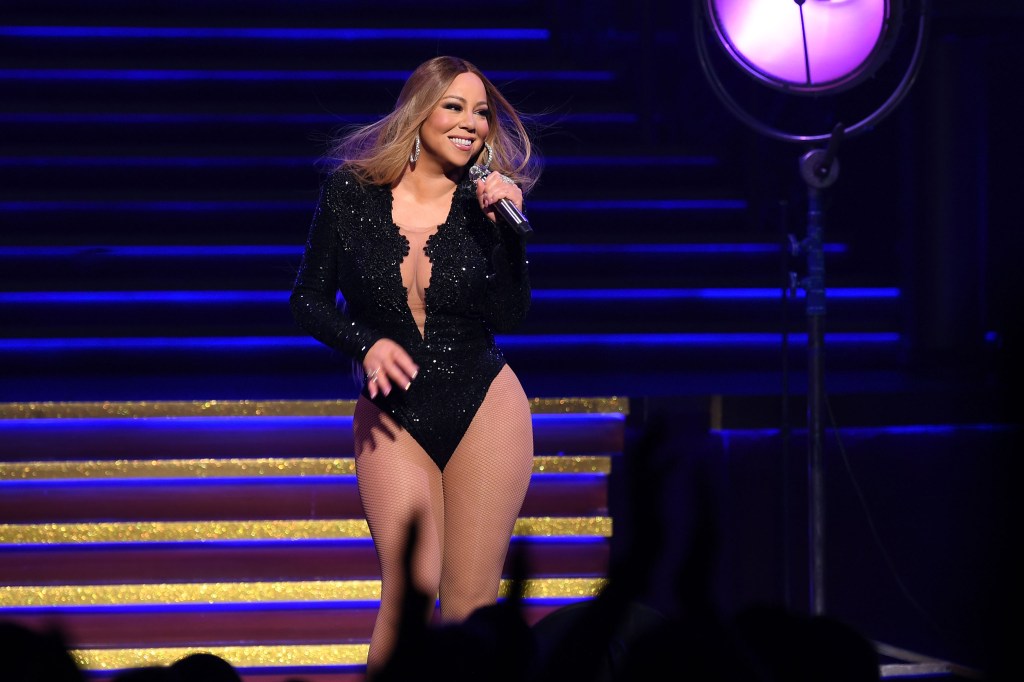