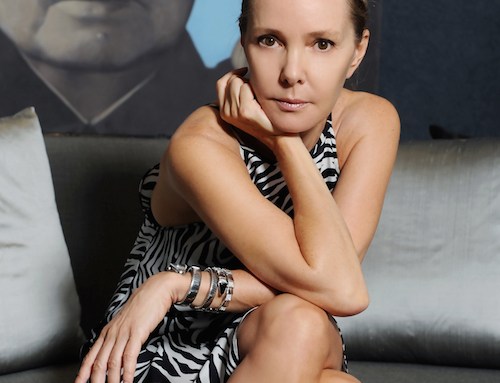 Canadian-born Marie France Van Damme is on a mission to dress globetrotting chic women — one silk chiffon caftan at a time.

Over the past five years of its existence, her Hong Kong-based brand of breezy resortwear has opened freestanding stores in Hong Kong, Bangkok, London, Singapore and Phuket. Meanwhile, it has snagged a growing list of celebrity clients such as Beyoncé, Angelina Jolie and Cameron Diaz.

Next year her namesake label will open its eighth store at the One & Only resort in the Chinese beach town of Sanya on the tropical island of Hainan. The luxury development — One & Only’s first foray into China — is slated to open in the second half of next year. Van Damme has also designed a limited-edition capsule collection for the Bahamas-based resort operator’s Neo Boutiques, featuring embroidered tunics and cover-ups in an exclusive blue bamboo print.

WWD caught up the designer — sporting one of her black caftans and a pair of chunky boots — just before she jetted off to Phuket for a family vacation aboard her Mangusta yacht. The Van Damme crew needs to take the boat out of Thai waters once a year for tax reasons so they are cruising to the Langkawi archipelago in Malaysia.

“They have the most unbelievable little islands going to Langkawi,” she said during a chat at her store in the IFC mall in Hong Kong. “They’re deserted, nobody knows them, nobody goes to them.”

WWD: What is special about Sanya for those of us who don’t know it?

Marie France Van Damme: It’s very easy access to the Chinese. It’s one hour from Shanghai or just a few hours from Beijing versus, let’s say, Thailand. They’re still in their country…it’s just beautiful beaches and hotels. [One & Only aims to make the new resort] so exclusive and expensive that they want to attract a customer around the world — or at least a customer [here in Hong Kong] that would normally go to Phuket or elsewhere.

WWD: So how do you see the market for resortwear developing in China? Are more and more Chinese people taking resort vacations?

M.F.V.D.: Here [in Hong Kong] already my clientele is mostly mainland Chinese…but more and more of these people travel. There’s nonstop flights now from Shanghai and Beijing to Phuket every day….You don’t really see them [during the day] because they don’t really go on the beach and just, like, sit in the sun. They do all kinds of activities. But you’ll see them at night, the restaurants and that’s where I think my things come in.

WWD: So they’re not so much beach dwellers. What else do they do at these resorts?

WWD: What is next for your brand? More stores?

M.F.V.D.: I’m looking at Dubai. That’s a tricky little market but I really, really think that we should be in Dubai. There’s America. I’ve been looking at Miami…I’m on what they call the waiting list for Bal Harbour [Shops]. They love the collection. They like what I do. I’m in [Saks Fifth Avenue and Neiman Marcus at Bal Harbour] and the collection does really, really well in both so they know that. But the leases are 10 years in Miami so you need to wait for someone to leave.