The model was one of the muses of Yves Saint Laurent.

By Sandra Salibian and Rosemary Feitelberg on September 10, 2019

The cause of death and her exact age were not immediately known, although she was believed to be in her early 70s. Schiano had not been well for a while, according to her friend Isabel Rattazzi.

Along with Loulou de la Falaise and Betty Catroux, Schiano was part of the triumvirate that personified Saint Laurent’s aesthetic vision of women. Saint Laurent once described the raven-haired Schiano as “a Pompeian fresco with the same dignity and vitality of Vesuvius. She is at the same time a classic beauty but with life — very endearing, seductive and marvelous.”

Born in Naples, Schiano started her career as a model and met Saint Laurent after being discovered by fashion photographer Yasuhiro Wakabayashi, best known as Hiro, in the Sixties. She quickly became close to the designer and contributed to increasing the charming and glamorous halo surrounding the brand, posing for some of its most iconic imagery. These include the 1970 black-and-white photo Jeanloup Sieff took in Paris. Wearing a turban, the focus is on Schiano’s profile and on the black, lace-backed evening dress by the couturier.

Their bond was a deep one. In a 1978 interview with WWD, she said, “It’s not the clothes any more that interest me about Yves. From him, I’ve learned so much more. I have learned about justice and integrity and honor. He is incredibly wise and his timing is amazing. He is the most romantic and sensitive man that I know.”

Nevertheless, her responsibilities included overseeing YSL’s business operations in the U.S., keeping a watchful eye over 52 boutiques, 21 licensees and the Saint Lauren image Stateside, as well as the U.S. launch in 1978 of the designer’s iconic fragrance Opium. Schiano was known to be near-obsessive about her work and to have a “legendary fury.” But she was also humorous and to witness her imitation of Diane von Furstenberg was something of a status symbol. Then there were her soliloquies on love, her passion for movies and movie stars, her magpie chattiness, her temptation to meddle and her warm, maternal tendencies.

For many, Schiano’s stature, drive and all-encompassing life symbolized a moment in time. In the high-flying days of Studio 54, once when Saint Laurent sauntered in with her, Halston stood up to embrace the designer. With that, Truman Capote reportedly told Hugo Guinness, “You have just witnessed one of the greatest moments in the history of fashion. That is, if you care about the history of fashion.”

Von Furstenberg recalled meeting Schiano in the Seventies. “I had so many laughs with her. She was so funny. I hadn’t seen her in quite a few years, but she was a very close friend of mine. Her and Elsa Peretti were the flamboyant Italians.”

As for where Schiano falls in the pantheon of fashion, von Furstenberg said Tuesday, “She was a Saint Laurent girl. She was discovered by Diana Vreeland. She had a strange look. When she first appeared in Vogue, she looked different, like Penelope Tree and Elsa Peretti. She was an unconventional beauty. From modeling, she went on to running Saint Laurent and then she worked for Tina Brown at Vanity Fair. Then she ended up marrying a Brazilian guy and lived in Brazil on a farm.”

Schiano was previously married to Andy Warhol’s confidante and business manager Fred Hughes for two years or so in what one friend described as “a pinball marriage” to secure a green card. Schiano appeared on the cover of Warhol’s magazine Interview. Photographer Christopher Makos, who worked at Interview early on in his career, said, “She was one of those great Italian aristocratic beauties. I wouldn’t say that she was the face of Interview, but she certainly was one of the faces of Interview magazine.”

Makos said, “Marina, Elsa Peretti and Daniela Morelli — all of these amazing ladies were on the masthead as contributing editors. The full validation happened if you worked at Interview. At that time, even if you did just one little thing, Andy [Warhol] wanted you on the masthead. I would say, ‘Guilt by association.’ In other words, these were fabulous ladies. If we had them on the masthead, they made it even more fabulous.”

Rattazzi, who first met Schiano in Rome in the Seventies, remembered her sense of humor and her “very quirky way of looking at everything. A lot of people here said, ‘Oh my God, she speaks so fast.’ But that was nothing compared to how she spoke in Italian. She was quite a character. But she did have amazing style. She was quite beautiful in a very odd way.”

Schiano cultivated her inner strength after being somewhat of an outcast growing up. Recalling in a 1978 interview with WWD her unhappy childhood days in Naples, Schiano said being taller than her peers and “not very good-looking” made her strong-willed. By her own account, she was “terribly well-dressed as a kid. I would tell the seamstress what I wanted and if I only had five dresses, they were great dresses. It was not that I wanted to be different. I just suppose I was.”

At 14 or 15, Schiano started modeling in Milan and she determined that it was a way to make a living and expand her universe. Her aristocratic mother never seemed to relate to the problems of her middle class father, who worked in construction. After his death, Schiano moved to Rome to live her uncle, who was active in Italian politics. There, she studied political science before moving back to Milan, where she befriended Peretti. “We were crazy together,” Schiano said in 1978. When Peretti headed for Spain in 1967, Schiano hit New York, modeling for such photographers as Richard Avedon and Hiro. She also worked for Halston and her friend Giorgio Sant’Angelo. And Vreeland championed her in Vogue. So much so that New York took to Schiano like a magnet to a bobby pin. Schiano said, “I mean, when the man at Customs says, ‘Welcome home,’ I am pleased.”

In 1980, she exited Yves Saint Laurent Inc. as executive vice president to establish her own company to handle press and public relations for the designer in the U.S. Pierre Bergé said then that the U.S. business had become too big for her to handle on her own, so she wanted to concentrate on what she did best. Two years later, Schiano started what would be a three-year run at Calvin Klein Inc. as director of public relations. She also designed jewelry for some time before becoming creative style director at Vanity Fair under Tina Brown. But later Schiano was stunned to read in The New York Post that she had been axed in a shake-up by Brown’s successor, Graydon Carter. “I guess they just couldn’t wait to get to the phone. It’s all so tacky,” she told WWD at that time.

As for charges of a “difficult personality,” she told WWD, “If I was so difficult to work with, why did it take them seven years to discover that? Our covers are extremely successful. Every big star wants to be on them. Sometimes to achieve this, there were disputes. But this is natural.”

About 20 years ago, Schiano moved to Brazil, where she lived in Trancoso, having retreated from the New York City scene.

André Leon Talley said he became good friends with Schiano after meeting her in 1975, when he was a market editor for accessories at WWD who also covered the social beat. “She was a very marvelous-looking, tall, tall, beautiful woman. She spoke with this incredibly dramatic accent that was a cross between Tallulah Bankhead and Elvis Presley. But in the middle of all the glamour of this world that I was catapulted into, you could always count on Marina Schiano to lay back and be a real person. If you went to her house on an off day when you weren’t going for an official thing, she would serve the best mortadella, an Italian delicatessen meat. She was a very simple person at home, although her apartment on Fifth Avenue was wonderful and she had great parties,” Talley said.

Schiano wore Saint Laurent’s clothes like no other, putting great care and attention to what she wore, according to Talley. “She would show up at the Met Gala in the most beautiful Saint Laurent evening gowns and ballgowns. The clothes were very important because that was her role as communications director for Saint Laurent in the USA. And underneath, she was a very kind person. She was funny, but what I remember most was her being kind. When she was kind, she was very kind. Although she did have the armor, the formidable strength that was required to be the director of public relations for Rive Gauche and Yves Saint Laurent. She had to navigate through so many personalities — socialites, editors — she did the whole thing perfectly. Of the great fashion plates of the time, she was one of the best.”

The fashion world reacted to her death on Instagram.

Von Furstenberg posted a black-and-white picture flanked by the caption: “Dearest Marina Schiano…so many laughs we had together…you were a beautiful soul…the world will miss you.” 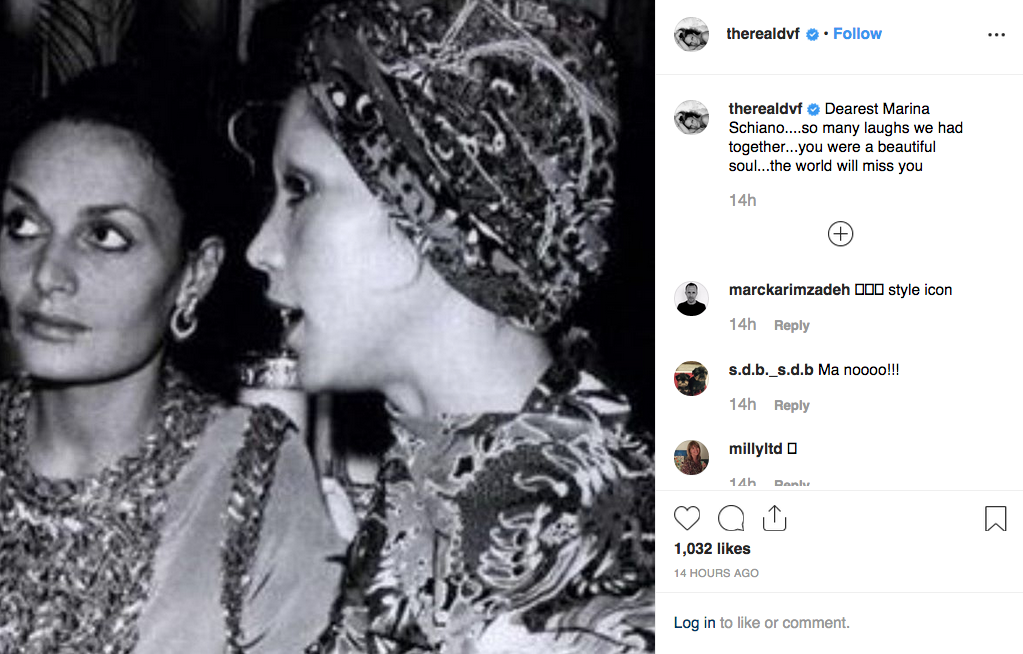 Valentino Garavani also shared an image of Schiano wearing one of his creations in the Sixties. “A Muse, a special elegance, a great personality! The world will always remember you #marinaschiano here in 1967 Valentino,” read the caption. 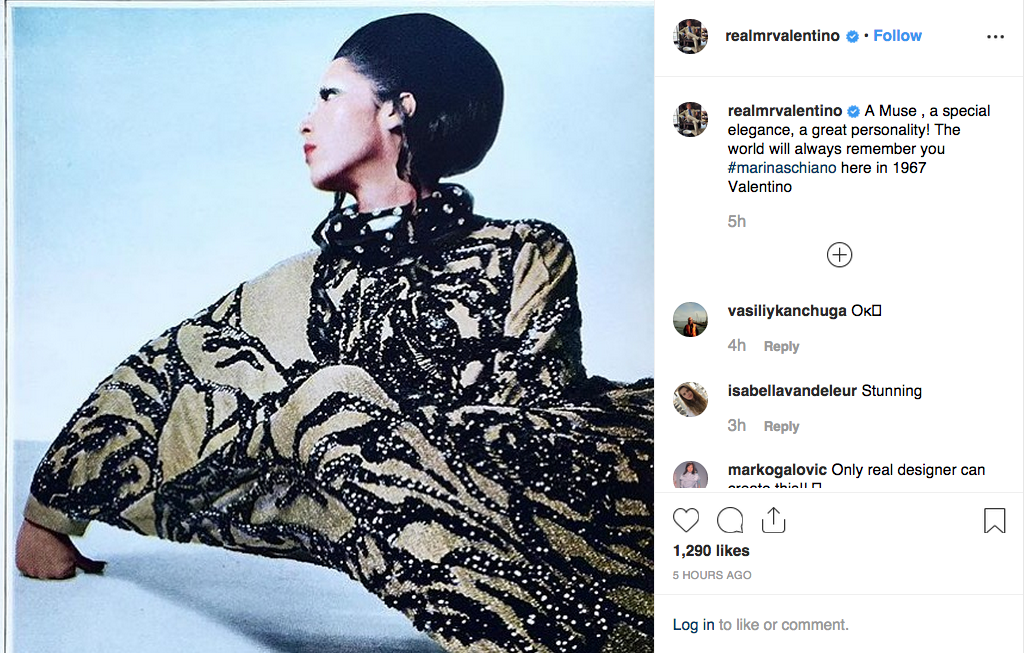 Giancarlo Giammetti echoed, “So many laughs, so much fun…and such a unique style! Will always remember you #marinaschiano” under an image portraying him with the model. 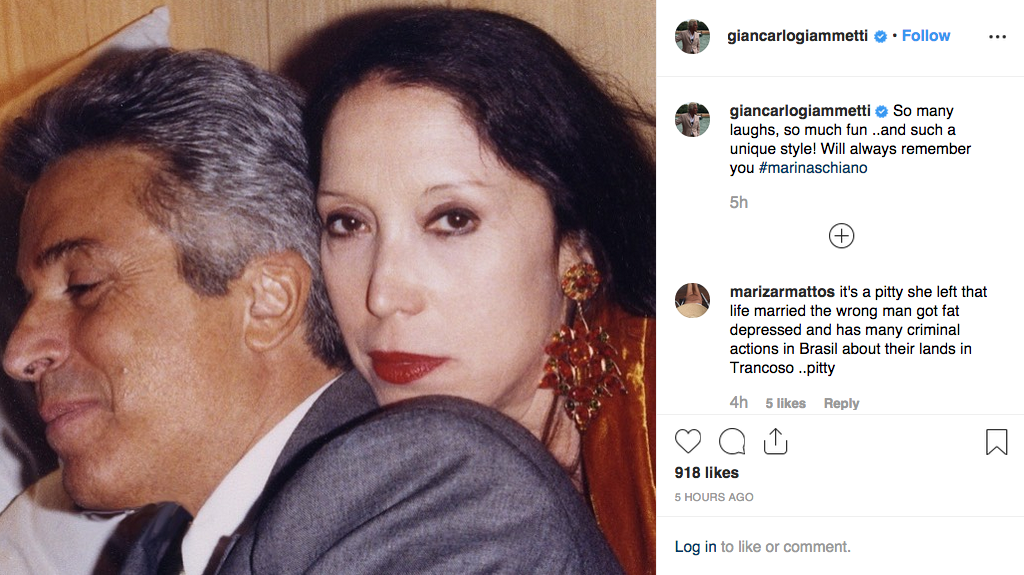 Top model Marpessa Hennink paid tribute to Schiano, posting three of her most iconic images. “#rip Marina Schiano. How intimidating you were to me when I first met you, with your otherworldly beauty, singular chicness and larger than life presence. Thank you for your wit and inspiration! #MarinaSchiano #MUSE #FashionIcon,” reads the caption. 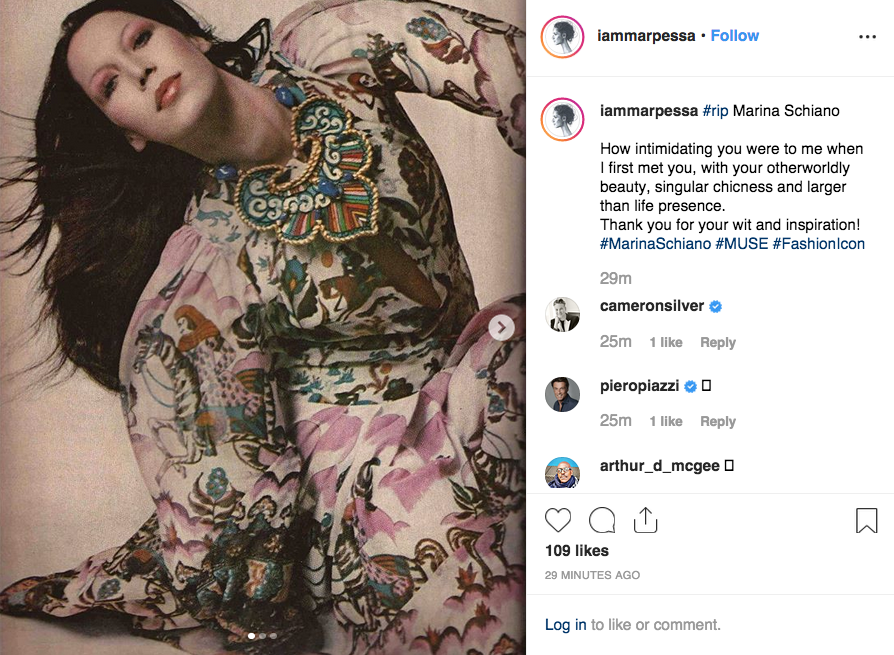 Nars Cosmetics’ founder and makeup artist François Nars also shared a portrait of the model “in loving memory of my dear friend and muse Marina Schiano,” which was reposted by the beauty label’s global artistic director Lena Koro with a more extensive caption. “Dearest Marina, You are such big part of my life. Especially for François. Beautiful, strong, smart, talented, amazing taste, big heart, taught me a lots love and life. I am very honored to know you and I love you. You will be missed. Grazie Marina ti voglio bene #Repost @narsissist.” 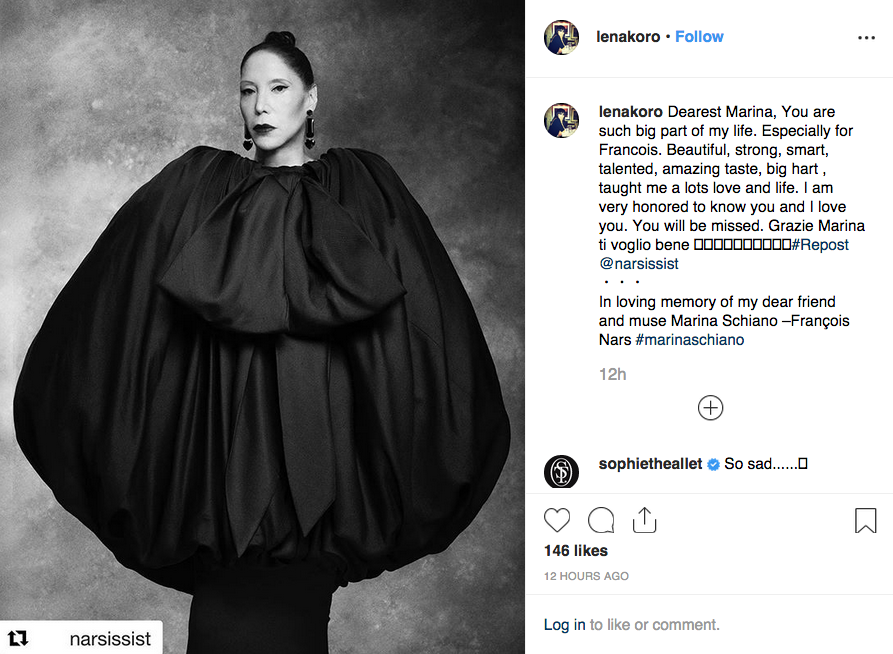