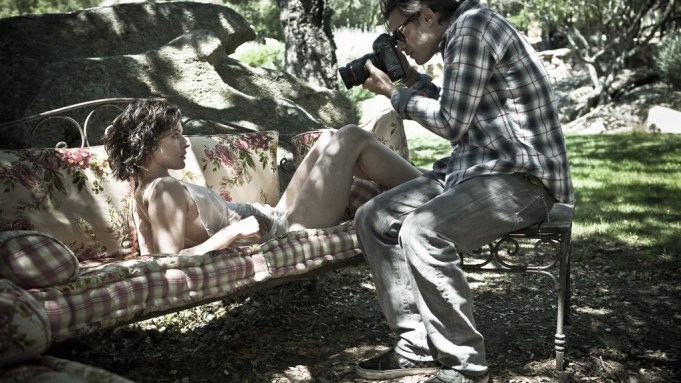 On a cold November evening, Mario Sorrenti, and his gap-toothed grin and nearly mirrored spectacles, are perched on a low black leather quilted chaise in the large and airy studio in Manhattan’s Little Italy where he works. The space is whitewashed save for the black furniture and glassed-in bookshelves that line one wall, overlooked by a black-and-white portrait of a nude Naomi Campbell. The photographer seems simultaneously relaxed and ready to pounce, as if his muscles are coiled. His voice rarely raises above a purr and his gestures are minimal, sure and strong. It is not difficult to understand how he has convinced legions of women to disrobe for his camera.

“You know, originally I thought I was going to do very sexy pictures, and when we got there I realized that I didn’t want the pictures to be sexy at all,” Sorrenti offers while displaying his latest work, the 2012 Pirelli Calendar, which will be unveiled at a New York press conference today. There’s Kate Moss against a windowsill, dappled in sunlight; there’s Natasha Poly in profile against a jagged cliff face; there’s Milla Jovovich supine on a boulder, head thrown back in ecstasy.

Despite the photographer’s protests, these are very sexy pictures.

“Do you think so?” Sorrenti says, breaking into a grin. “I meant that they’re not ‘obviously’ sexy. I didn’t want them to be posing and arching and like sticking their boobs in my face or anything like that. I thought that’s what I wanted, that it would give the most immediate impact, but then I realized that wasn’t important….I was trying to just really focus on them and the environment and let that blossom together somehow.”

As helmer of the famed calendar, that exclusive collection of the most beautiful women in the world made into nude pin-ups, Sorrenti joins hallowed ranks that include Peter Beard, Herb Ritts and Richard Avedon.

“Mario is one of those real purveyors of ‘the male gaze,’” says fellow photographer Miles Aldridge, recalling their first meeting some 20 odd years ago. “[Sorrenti] understands the power and the energy of the connection between a man, a camera and a woman. The burden of it, too.”

The Pirelli shoot took place over a week on a “huge farm” in Corsica, Sorrenti explains, adding that he wanted to go back to his early inspirations in photography, who include Robert Frank and Ansel Adams.

“Originally my idea was to go back to the place Edward Weston did a lot of his photographs, in Big Sur, but it was too cold,” he says. “I didn’t want anybody to suffer.”

The models and crew all stayed together on houses on the Corsican property and took their meals together, in a sort of hyper-glamorous summer camp. Living a heterosexual male fantasy, Sorrenti would spend “the morning with one girl and the evening with another, and we’d all have dinner together.”

He notes that he specifically tapped models that he had worked with before.

“It was super important for it to be familiar, to do this with people who felt that they trusted me completely, who know what I’m about and what pictures I like to take….It’s awkward either way,” he explains of the nude shoot. “The most awkward is that first moment when you’re completely taking your clothes off, and after that it gets a little easier.”

But surely these women are consummate professionals, and not new to posing in the nude?