The show contains over 70 garments ranging from the 1900s to the Sixties. 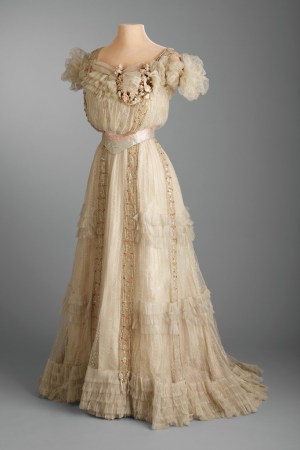 WASHINGTON — Hillwood Estate, Museum & Gardens, the Washington home of 20th-century grande dame Marjorie Merriweather Post, is set to open an exhibition dedicated to her love of clothes, highlighting how they evolved and eventually came to symbolize the eras her lifetime spanned.

The show, which opens to the public Saturday, contains over 70 garments that narrate her reinventions from Edwardian bride in 1905, to 1920s businesswoman, to society queen throughout the Fifties and Sixties. The garments are on display inside the mansion and in a separate building on the property.

Her wardrobe “reflected her personality and role in society,” says Howard Kurtz, the curator of “Ingenue to Icon: 70 Years of Fashion from the Collection of Marjorie Merriweather Post,” which runs through December.

Post inherited her family’s cereal fortune in her 20s, making her the wealthiest woman in the country at the time. Married four times, she was the mistress of two other homes — a summer getaway in the Adirondack Mountains, and Mar-A-Lago in Palm Beach — where she hosted the first Red Cross Ball.

Kurtz scoured the Hillwood archive, which contains over 175 dresses and 300 pairs of shoes, gloves, and other accessories to demonstrate “how she loved things that were well-made.”

Labels didn’t matter. The gown that opens the exhibition, worn in her most ravishing portrait, doesn’t even have a tag.

“It was probably ripped out, “explains Kurtz, “because she didn’t want anyone to know where she got it.”

It’s silky, white and sleeveless, cut on the bias, accessorized with fur, rubies and diamonds, fine exponents of the Hollywood glamor of the Thirties and Forties when she was married to Joseph Davies, who was ambassador to the Soviet Union.

Like most women of her stature, she relied on Parisian houses, like Callot Soeurs, which she encountered on visiting the 1900 Paris Exposition. A high-waist gown in sheer turquoise moire from 1907 is a good example of her look at the beginning of the century.

“A Charles James knockoff,” a satin, taffeta gown purchased from Bonwit Teller, is shown along with gems from Bergdorf Goodman, a favorite shopping destination since her school days, when she was finding her fashion sea legs.

A frothy pink Bergdorf number overwrought with bows and multiple layers of silk ribbon, from 1904, is also shown. By the end of the Roaring Twenties, she is sleek-and-chic in a black flapper style dress, also from Bergdorf’s.

A “Suffragette suit” is on display, worn for her visit to see President Woodrow Wilson.

By the time Post reached the zenith of her power as a hostess and philanthropist, she favored the “New Look” with its cinched waists and full skirts. A pale blue ballerina-length dress from the mid-1950s highlights that era’s fascination with the feminine form.

The current exhibition reflects Post’s wardrobe for spring and summer, and will be updated for the fall and winter in October, according to Kurtz.