Mark Gonzales regrets not paying the admission to see Picasso’s Guernica. It was the Eighties, and Gonzales was in his pro skateboarding prime, helping to establish an era of street skateboarding in New York City. But the sport didn’t yet have the mainstream appeal it has today, and this was well before the brand and product collaborations to come. It was before Gonzales would establish an art career of his own. So while touring through Europe with other pro skaters, Gonzales didn’t have a lot of money, and seeing Picasso’s famous anti-war painting wasn’t a priority.

“I wasn’t into art yet. I was, on boards, but I wasn’t into seeing paintings or even comprehending art in intellectual terms,” Gonzales says over Zoom from the back seat of his car, parked somewhere in Massachusetts. “But now I kick myself, like: why didn’t you go in there?”

A lot has changed between then and now, yet Gonzales hasn’t retreated from the fearless and pioneering approach to street skateboarding that established him in the Eighties. His relationship to risk — in terms of skating — hasn’t changed; he’s just as willing to tackle new tricks. One of those tricks, performed in collaboration with Tony Hawk, is captured in “Mark Gonzales,” a new book from Rizzoli.

“Here he is, nearly 50, skating a vert bowl when he is widely regarded as a street pioneer,” Hawk writes in a vignette alongside Sem Rubio’s photography. “To put it in perspective, I have skated vert and bowls my entire life, and I would never consider doing a Boneless over someone. But Mark has the talent and drive to explore the unknown and make it beautiful.”

Now in his early 50s, the street skateboarding icon and artist is married and has a young daughter, but he’s still as active as ever, and the book looks at Gonzales through a current lens.

“I don’t think there is a photo in there where I am young. Most of my brain tells me ‘You used to be a big skateboarder in the Eighties,’” Gonzales says of the book, which was spearheaded by Rubio, who took all of its photos over the course of several years. 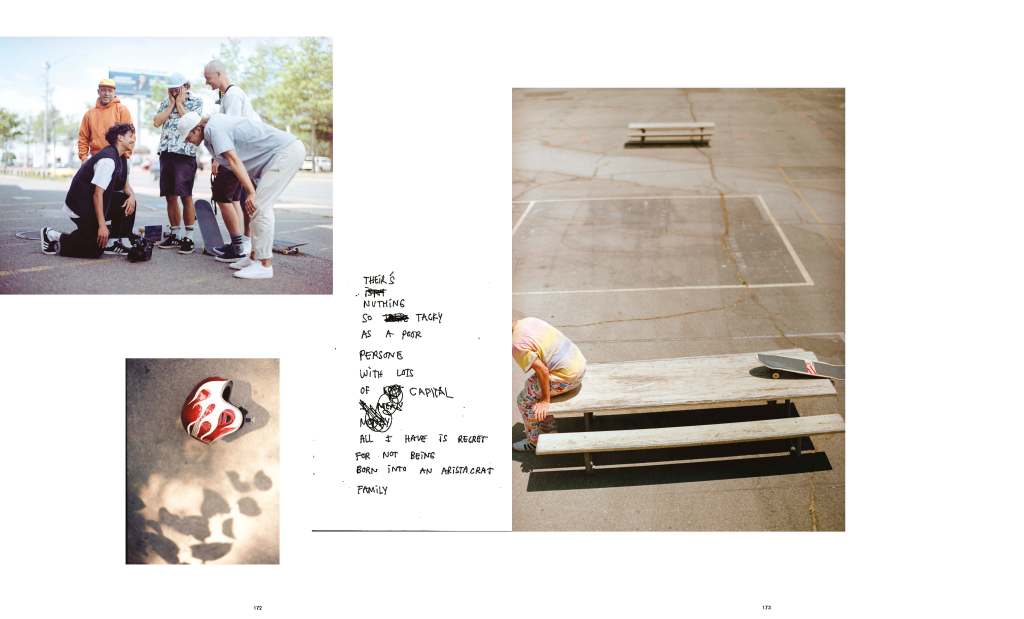 In the book’s foreword, creative director Lou Andrea Savoir describes Gonzales — or Gonz, as he’s known casually — as a “California-born cat with nine lives who’s been slink around the streets of New York City, turning them and the rest of the world into his playground for the past 30 years.” While Gonzales figures prominently in the book’s imagery — Rubio’s photography, as well as the skater’s own artwork, poetry and clothing and board collaborations — there’s no interview with Gonzales; no self-reflective essay. Instead, Gonzales is exposed through interviews and written contributions from close friends, collaborators and admirers. There’s skateboarders like Tony Hawk, Ed Templeton, Lance Mountain and Jim Thiebaud, creatives tangential to the skateboarding world like Spike Jonze and Gus Van Sant, and artists like Kaws and Tom Sachs.

They all had very nice things to say about him, but none of it surprised Gonzales. “I don’t know, nothing really surprises me,” he says, adding that he was flattered.

The book asks similar questions of everyone included: In what ways do they feel more free than when they were younger? What still drives them nuts? With those questions turned on himself, Gonzales had this to offer:

What still drives you nuts?
“Running out of things I need like grip tape or bearings,” he says. “Or when my spray paint can loses pressure, or I can’t spray with them. Paintbrushes not getting cleaned and then they dry up, and it’s really expensive good paintbrush and it’s ruined. Stuff like that drives me crazy.”

In which ways do you feel more free now than when you were younger?
“Being able to buy whatever I need.

“The freedom is having money now, where I didn’t have it when I was little,” he adds. “Money gives you freedom to buy what you want. The friction would be having to pay taxes.”

Ahead of the book’s late September release, Gonzales was enjoying a prolific period of art making in August while in Massachusetts; the ability to paint outside meant that he was able to create multiple skateboards versus his usual one or two a day when working from his Chinatown art studio. “I guess I’ll get back to doing slow artwork,” he says ahead of his return to the city, where he lives. “I’m not a big operation with my artwork.” Recently, he was making art on skateboards for a forthcoming show organized by gallerist Leo Fitzpatrick (of “Kids” fame) at a new community art space on St. Marks Place.

Gonzales’ work can often be found in Supreme boutiques, a brand he’s worked with for many years.  “They must like working with me, we keep working together,” he says. “They seem to know what they’re doing.” In addition to multiple product collaborations, the brand’s stores have also housed several of his artworks, including a large powder-blue sculpture in the Bowery store in New York.

“It would be strange to see my work in someplace like the Centre Pompidou or some big museum, I think it fits better in a boutique,” says Gonzales of the contextual setting. “There’s more of a relationship to the world I come from. I didn’t go to art school and I’m not from that world; I dropped out of school. Skateboarding was the way that I made it. The artwork being in a boutique like that makes more sense.”

Despite getting older, Gonzales’ approach to life hasn’t aged. When it comes to skateboarding, he still feels like a kid, an aspect of his personality that’s praised throughout the book. Mulling this aspect of himself, Gonzales recalls a recent run-in with a shop owner in TriBeCa, about his same age, who was upset that he was skating in front of her store. He describes the dissonance as “weird.”