The Grammy- and Academy Award-winning producer sat down to talk on Wednesday before his conversation with Rolling Stone at Ralph Lauren.

Mark Ronson has been on a tear recently. The award-winning record producer released his latest album “Late Night Feelings” in June and won an Academy Award for “Shallow,” a song he cowrote with Anthony Rossomando, Andrew Wyatt and Lady Gaga, whom he worked with to produce the singer’s 2016 album “Joanne.”

He’s also one of the brains behind Amy Winehouse’s second album, “Back to Black,” alongside the now-late singer herself, as well as songs with Adele, Bob Dylan, Christina Aguilera, A$AP Rocky, Solange Knowles, Nas, Duran Duran, Foreigner and even Quincy Jones and Paul McCartney.

His most notable hit as of late, “Uptown Funk” with Bruno Mars, went platinum in several countries, won countless awards and was inducted into the Guinness World Records for spending the most weeks at number one on Billboard’s Digital Song Sales chart.

With a long list of accomplishments and a catalogue of classics, Ronson doesn’t act the part of a fast-talking self-centered individual that one would expect of a successful entertainer. The artist sat with Rolling Stone senior music editor Patrick Doyle for a conversation at the Ralph Lauren SoHo store on Prince Street and told stories of successful records with Winehouse and Mars being happy accidents.

“It’s nice to have your songs reach people, but the fact is that any of the records that I’ve ever made that have done well and resonated, we had no idea what we were doing when we were making them,” he said in the conversation. “We were just writing from a very genuine and honest place.”

Ronson came across as very chill and relaxed, or maybe he was just really tired from all of his traveling to promote his latest album. He also performed his single “Don’t Leave Me Lonely” with singer Yebba on “The Tonight Show” the day before.

For Ronson, New York City is home. His family moved to New York when he was eight years old, and his parents, who were both in show business, would host celebrities at their home on Circus Road. He shared a story of how Robin Williams put him to bed, and how he reminded the late comic of the moment in a restaurant 15 years later. “Wait, is that the house at Circus Road?” Williams asked. “Your parents had crazy parties man.”

Ronson is far from aloof though. Prior to the talk, he mentioned his attention to detail, citing his astrological sign, Virgo. He had many style phases like his preppy phase in high school or his hip-hop phase when he was a DJ. He appreciates Rocky and Troye Sivan’s daring style — “I’m not as adventurous but I appreciate aesthetic, design, the cuts and shapes of things, people who put things together really well — and mentions the work of Japanese tailor and designer Kyosuke Kunimoto, who has a line called Maison Lance and had designed for St. Vincent and Sean Lennon. “He only makes 30 suits a year,” Ronson said.

He also downplays recently being named the most stylish man in music by GQ. “I wouldn’t consider myself super fashion-conscious, but I think that I probably have a good eye and doing it long enough that people like my style. It’s hard for me to talk about it because it sounds a bit arrogant,” he said.

It’s as if his comfort zone is to uplift others, which makes a solid foundation to be a great record producer. He said to Doyle that he gets intimidated working with artists that he’s big fans of like Duran Duran or Josh Homme of Queens of the Stone Age. His experience with McCartney is what one would probably expect a meeting with McCartney to be. Ronson dropped just about everything he put his hands on, and laughed saying normal objects in the room were just “kryptonite.”

“He gives you a day to get over the nerves,” Ronson said in the conversation. “It’s like, ‘I get it, I’m Paul McCartney; you’re going to drop some s–t for the first day. You’re not just in the room with him and the ghost of the Beatles and every record he’s made, but you’re also in there with every producer he’s ever worked with.”

He compared fashion designers like Ralph Lauren to music producers before the conversation saying, “The brands that I’m attracted to or designers, it’s similar to how I approach making music. Ideally, you want to make something that’s timeless but very much of now and that’s a lot of what Ralph Lauren kind of does.

“Ralph Lauren is another thing — a classic thing — that’s been through my entire youth. They have such good, well-designed, classic stuff that it works for any occasion or mood. It’s not just one you. It’s fun, too, obviously. Music and fashion have this kind of link and it’s fun to see how that ship moves.” 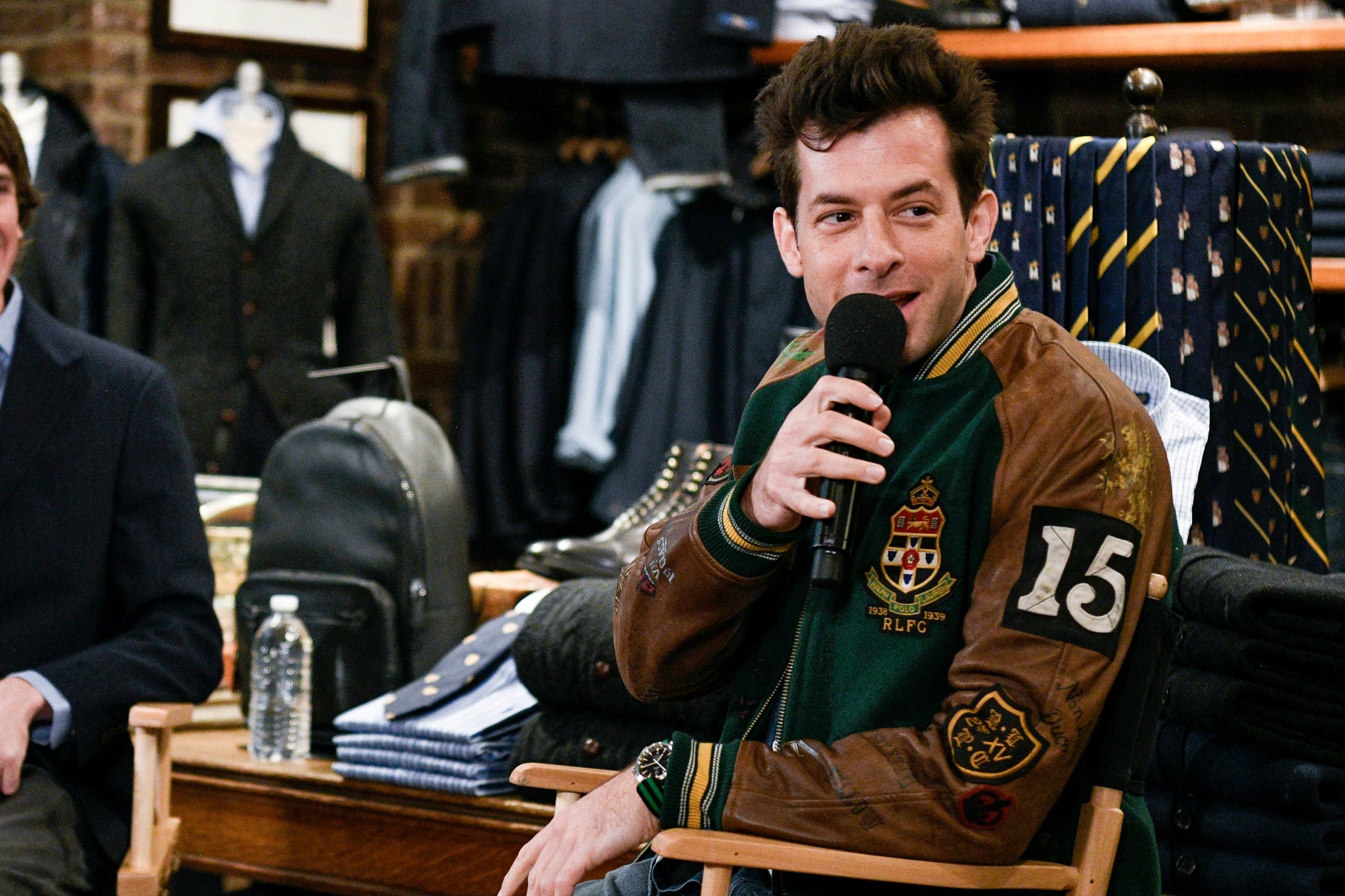 There is a sense that Ronson’s brain is a sponge for knowledge, which began quite early in his life. He interned at Rolling Stone on his summer vacations between the ages of 12 and 14 because he wanted to learn the ins and outs of the music industry. “I was a big music junkie and I loved journalism,” he said.

“I was, like, 12; I was an editorial intern assistant and my voice hadn’t fully broken yet so I had this high-pitched squeaky voice. I was so voraciously hungry for knowledge about music and to know how it worked and I think that everybody there saw that and took to me.”

Back then, Rolling Stone used their own system to track music, which involved calling different record stores to find out what was selling. Ronson made most of the calls at that time and still laughs today about one mix up with the publication’s art department and the Batman soundtrack.

“It turned out that week that the Batman soundtrack was number one so I went down to the art department because it was my job then to tell them so they could put the logo of the album in the layout. I had never been down there before and I was supposed to ask for this woman and she thought I was some kid who was really into Batman, she had no idea.”

Taking part in the conversation was a full circle moment for Ronson. You could even call it a family affair. Ronson knew Gus Wenner, the president and chief operating officer of Rolling Stone, for a long time — “I’ve actually known him since he was a kid; our families are really good friends” — and he even recruited Wenner to do backing vocals on a song on his first album “Here Comes the Fuzz.”

“Any time I can be featured in something that I grew up really idolizing, I’m always excited about that,” Ronson said. “It’s like the same thing as getting asked to play on ‘Saturday Night Live’; it’s these things that seem so big in your youth and if anybody asks me to do any of those things I’m such a sucker for that.”