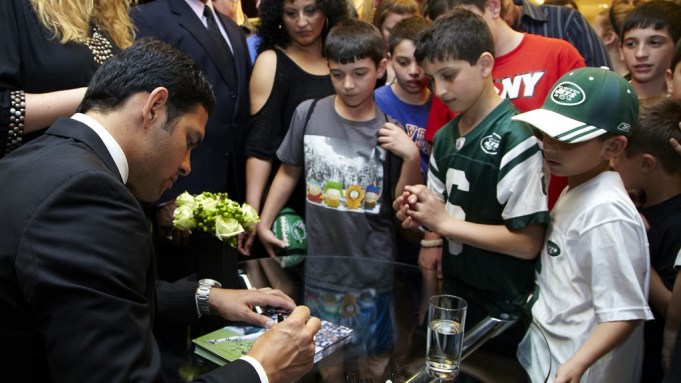 Although Sanchez, the New York Jets’ star quarterback, was skeptical that his overtly religious new teammate’s public persona might have been an exaggeration, he’s discovered that’s not the case.

“It’s true,” Sanchez told WWD in an exclusive interview during an appearance at the Hugo Boss shop at the Neiman Marcus store here Thursday night. “When you meet the guy, you realize he really is that good a person. He’s great.”

Although the media and the rabid football fans in New York are expecting a clash between the two players, Sanchez, who has been designated the team’s starting quarterback, was welcoming. “The quarterback room has changed, but it’s real fun having Tim there,” he said, referring to the release of his former backups Mark Brunell and Kevin O’Connell last summer. “It’s a good fit.”

He said Tebow has been “a great addition so far. He’s a big, strong guy,” and has helped push him in the weight room since the team’s return to practices last week. “That’s been one of my goals this off-season — putting on a little more muscle mass. I’ve taken a beating during the season,” he said. “It’s been a good transition, and Tim’s been great. He’s been as advertised, as good of a guy, if not better, than anybody said. I’m thrilled to work with him.”

He said the Jets players in general are “real close. We make an extra effort to be together outside the building. We have a vested interest to get along, and team morale is high.”

Sanchez said he was “excited to be back” and is expecting the Jets to do well this season. “That’s the plan,” he said. “We didn’t make the playoffs this year so we were done Jan. 3 and just came back this week. It seemed like forever, but it’s good to be back. The guys are rejuvenated and energized. We’ve had a good chance to reflect on our shortcomings last season and ask why.” During the off-season, Sanchez said he spent time on the beach and got a chance to go to Hawaii. “But I started working out on my own around five weeks ago.”

He smiled when asked if he was involved with Sports Illustrated swimsuit-issue cover model Kate Upton. “I’m a single guy,” he stressed. “I’ve known Kate for over a year, but she’s got a lot of stuff going on and so do I. We’re just close friends.”

Sanchez, who was dressed in a black Hugo Boss suit, black tie and white shirt for his appearance, said his wardrobe these days is a far cry from what it was before signing with the Jets. “I was in college before I got drafted and wore suits my father and I found at a garage sale. They fit, so we went back for more. This is way better,” he said with a laugh.

He said that as a California boy, he’s most comfortable in “rainbow sandals, a T-shirt and shorts, but as the quarterback for the New York Jets,” he’s had to step up his fashion game. He pointed to athletes such as David Beckham and Amar’e Stoudemire as role models who have managed to create their own unique sense of style, but laughed: “That’s way in the future for me. I’m still searching.”

Sanchez said his association with Hugo Boss has become more of a friendship than a business deal, pointing out that Ward Simmons, the company’s vice president of marketing and public relations, is now a good friend. “He’ll call me up when I’m in the city to see if I want to grab a bite or go to a Knicks game,” said Sanchez.

Since turning pro, Sanchez has tried to associate himself with companies that have a wholesome reputation. “Since my rookie year, I’ve tried to maintain good relationships with companies that have a family-type atmosphere,” he said, singling out Nike, Toyota, Verizon and Degree. He is also a fan of Nixon watches, and sported a large gray model on his left wrist. “I’m good friends with the marketing guy,” he said. “He and Ward are the same kind of people. I actually spent Easter with him and his family.”

Sanchez’s appearance for Hugo Boss was part of the company’s Cocktails and Conversations series designed to commemorate the addition of Boss Black Menswear shops at 17 Neiman’s stores around the country. Brian Boye, fashion director of Men’s Health, talked sports and fashion with six athletes at different stores over the past few weeks.