Keeping the designs top secret was a given, according to Markarian’s founder.

President-elect Joe Biden and Dr. Jill Biden arrive in the Crypt of the US Capitol for Biden's inauguration ceremony.

Jim Lo Scalzo/Pool Photo via A

That was the reaction from many Inauguration Day watchers when First Lady Jill Biden stepped out in an ocean blue tweed jacket and dress from the little-known New York-based occasionwear label. After a sleepless night Tuesday, the company’s founder Alexandra O’Neill was elated to see Biden’s chosen outfit.

Asked how this mega exposure will impact her business, O’Neill said, “It’s such a huge moment. It’s incredible to be even a small part of American history. We’ll just have to see where it takes us.”

First approached by Biden’s stylist in December, along with a number of other designers, O’Neill initially sent about 10 sketches. Accustomed to working with celebrity clients like Lizzo, Kerry Washington, Kate Hudson, Felicity Jones, Constance Wu, Saweetie, Laura Dean and Lucy Hale, the designer said the Biden assignment was “the ultimate.” A six-person team has been working straight out “with all hands on deck” on the two-piece outfit since late December. O’Neill hand-sewed the Swarovski pearls and crystals embellishment to the exterior of the coat and dress.

Markarian’s opening price point is $995 and goes up from there. O’Neill said she did not have a number right now for the fee for Biden’s all-custom design.

Confidentiality was not a concern, due to her explicit trust in her team. COVID-19 restrictions nixed any in-person fittings and all of the work had to be done remotely. Striving to create something “beautiful, classic and feminine that would stand the test of time,” O’Neill and her team researched Biden and previous first ladies.

If some interpreted a princess vibe in Biden’s attire, that was not by chance. One major source of style inspiration was the late Princess of Monaco and film star Grace Kelly. O’Neill said she drew from Kelly’s film life and her princess life, too.

Fifty percent of Markarian’s business is custom designs for private clients and the other 50 percent is retail-driven with accounts like Moda Operandi, Bergdorf Goodman and a number of other stores.

From the start of her business in 2017, the aim was to create “beautifully made, ethereal, whimsical and feminine pieces” that were produced in New York.

Raised in Evergreen, Col., O’Neill said she started sewing at the age of 10, thanks to her seamstress grandmother, who lived with the family. “I used to go to the local fabrics store. I would spread the fabric out on my grandmother’s apartment and she would help me make things.” 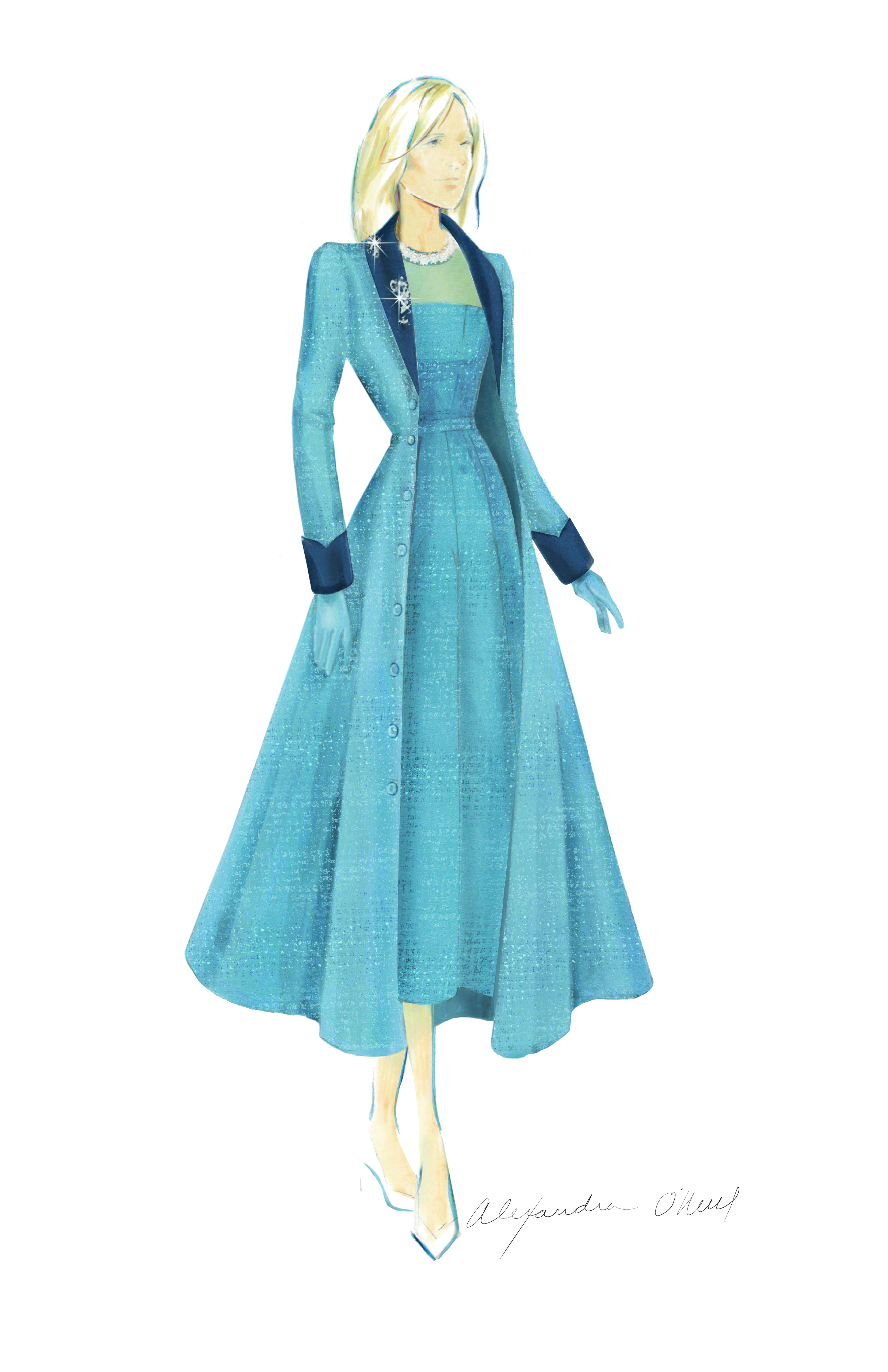 After relocating to Manhattan in 2004 and graduating from New York University, O’Neill started a small contemporary sportswear line, Porter Grey, with her sister, Kristen. That business disbanded in 2012 and Alexandra O’Neill took some time off to figure out her next career move and begin planning Markarian.

Acknowledging how fashion requires a lot of hard work and is a leading industry and major job creator in New York, she said Biden is pretty well aware of “the impact that her choices have on fashion and the impact that then has on so many jobs, especially Stateside. She chose an emerging designer for this big day so I know she’s looking to support new talent. That is very special and exciting.” O’Neill said, adding that she hopes to continue to work with Biden’s team.

Bailey Moon is believed to be the stylist handling Biden’s inaugural choices.

”Starting any business is a challenge. Brand recognition is the biggest thing. The hardest thing is coming up with a name. I have always been drawn to the stars and Markarian is named after a group of galaxies,” O’Neill said.

Uncertain what the company’s annual budget is, O’Neill also wasn’t sure if any retailers had reached out Wednesday. “I haven’t even looked at my email yet. I’ve been too excited,” she said.

So excited, honored and humbled to be chosen, O’Neill hadn’t made any plans to celebrate. “It’s all so surreal,” she said. “Everybody is so excited for me and they feel very proud of me. It’s amazing.”

Initially launched as a celebrity-based brand, Markarian is rooted in occasion wear like cocktail dresses and eveningwear. Given the dearth of special events due to the pandemic, that is no easy task. O’Neill said, “It’s been a challenge like everybody else is going through or facing. Our private client business has been pretty strong throughout this, luckily. We do bridal. With so many people’s wedding plans changing, we’ve had a lot of clients looking for something different to wear for a Zoom wedding, a backyard wedding or a small civil ceremony. That’s what we have been focusing on for the past year.”

Markarian also created a sweatshirt during the pandemic, with all of the proceeds benefiting different charities like No Kid Hungry and Feeding America.