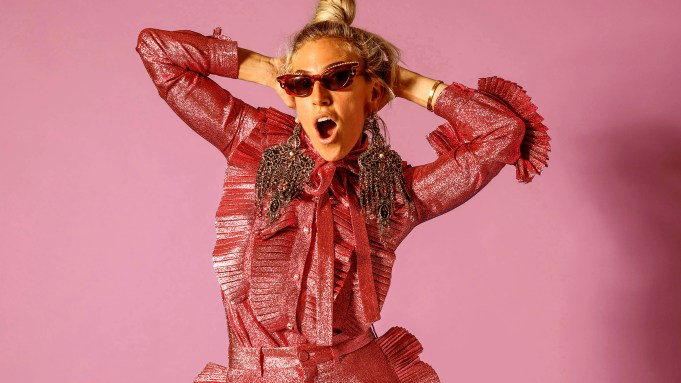 Marni Senofonte is as colorful in person as she is on social media. She shows up to our interview wearing pink Gucci lurex pants, a white, loose-fitting tank top and baby blue Adidas sneakers that she quickly trades for Gucci platform heels. She’s shunned uniforms ever since her Catholic school days, which is why she refuses to conform to New York’s all-black dress code. In fact, she hasn’t worn black in 20 years.

“That started with Norma Kamali,” she explains. “She did a ban on black for one season and since then, I’ve never purchased anything black for myself — underwear, socks, pantyhose, anything.”

Born and raised in Scranton, Pa., Senofonte was always itching to leave. Her wish was granted when she got accepted into Emerson College in Boston. Following her graduation, she moved to New York and landed her first job with designer Norma Kamali, where she worked her way up from a sales associate to public relations director and Kamali’s assistant. “For someone who didn’t even know what the hell they were doing, it was a huge job,” she says.

She describes Kamali as being “hard on me” — just as her parents were, but says the designer also gave her her first styling opportunity. “When I was working in the p.r. department, a publicist came in for Salt-N-Pepa,” she says. “I was begging Norma, like, ‘Norma can I please bring them something to wear?’ She’s like, ‘Go ahead.’ So I just put one outfit together for each of the girls, not even knowing what racks of clothing you need — and they loved it.”

The chance shoot led to other opportunities. After seeing some of Senofonte’s work, Lauryn Hill approached her to accompany her on tour for “The Miseducation of Lauryn Hill.” Soon after, Senofonte found herself styling Diddy, Jay Z and Beyoncé. And recently, Blue Ivy.

Senofonte became a part of Beyoncé’s circle through Lorraine Schwartz, of whom Beyoncé is both a friend and a client. “I would always see Ty [Hunter], a stylist that [Beyoncé] had for years and years, and her mom,” she says, adding that she would occasionally be asked to assist with one-off projects. “If they had, like, an American Express commercial, they’d call me. Or if they needed a video, they would call me.”

Beyoncé’s longtime stylist Hunter, who is credited as the head stylist on her self-titled 2013 album, began to pursue solo opportunities around the same time that Beyoncé wanted a change of direction, according to Senofonte.

Senofonte began working more heavily with Beyoncé in 2014. She worked on the video for “7/11” and “Feeling Myself,” and in 2016, the visual album “Lemonade.” She’s crafted Beyoncé’s entire “Lemonade” era — from the wide-brim “Formation” hat, to Bey’s 2016 Super Bowl performance to her lemon-printed street-style looks. Most recently, Senofonte styled Beyoncé’s social media record-breaking pregnancy photo shoot and her Peter Dundas Grammys reveal.

The Dundas reveal was an example of perfect timing. The designer had expressed to Senofonte that he wanted Beyoncé to play a role in the unveiling of his first eponymous collection. Senofonte had just found out Beyoncé was pregnant with twins when Dundas, unaware of the news, told her that he and his partner wanted to start a family — and were hoping for twins. Senofonte relayed this to Beyoncé, who agreed that the coincidence was a sign. The rest is history.

Though working with Beyoncé has its perks, Senofonte admits it’s a challenge. “She and I have the same exact work ethic,” she says of the singer. “She’ll ask for the moon ’cause it’s possible — in her world, it’s possible. And I’m like, ‘You know what, it is possible. I can get this, I can make this happen.’” She uses mood boards as a starting point and draws inspiration by people-watching. Her aesthetic is and always has been “sexy tomboy.”

Most of all, she wants it known that her job is not as glamorous as one might think. “People see this career and this job and they see the smiles and they see the happy-go-lucky,” she says. “Everyone’s like, ‘Oh yeah, you’re at the gym and you drive a cool car and you have these cool clothes.’ The grind is real.”

Contrary to her vibrant and confident Instagram presence, Senofonte is rather humble. She travels home to Scranton from Los Angeles, where she’s spent most of her time lately, or New York, where she actually lives, as often as she can. “I appreciate small-town life so much more now than I did then,” she says. “[The people are] just salt-of-the-earth kind of people and just normal. You can get cereal for, like, two dollars.”

And despite having known and worked with her for years, Senofonte doesn’t take for granted the fact that she styles Beyoncé. “There’s no reason on God’s earth that a girl from Scranton, Pa., should be working with the biggest star in the world,” she says.