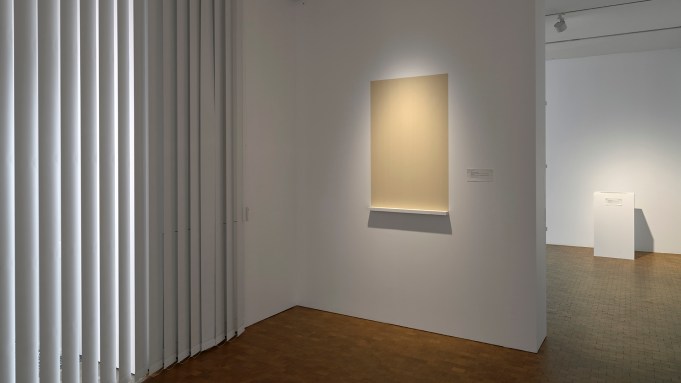 PARIS — “Martin Margiela is not here.”

The announcement by Rebecca Lamarche-Vadel, director of Lafayette Anticipations, the Galeries Lafayette Foundation, at the start of a guided tour of Martin Margiela’s first art show surprised precisely no one.

Fashion’s greatest disappearing act is proving just as elusive in his new career. The former designer spent two years working with the foundation to create the more than 40 art works on display, or in some cases, not. Dotted among exhibits — including silicon spheres covered in human hair and large-scale paintings of dust particles — were blank spaces.

“You’ll find ‘ghosts’ throughout this exhibition. These ‘ghosts’ emphasize the idea of an exhibition that is in flux, that is unfinished and in permanent movement. So, it is the silhouette of works that have not been exhibited, but that exist,” said Lamarche-Vadel, who also curated the exhibition.

Titled simply “Martin Margiela,” the show opened on Wednesday and is set to run until Jan. 2. Visitors enter through the emergency exit, and wander through a labyrinth of blinds and curtains. “Why a labyrinth? Because it’s a form of metaphor, an analogy of the idea of an existential quest, the meaning of life,” she said.

Many of the art works themselves are concealed by covers or curtains that remain in place during the week, and are periodically removed by attendants on weekends. Visitors are invited to touch a silicone-covered sculpture representing an unidentifiable body part.

“Martin asked me a lot of questions about the art world,” Lamarche-Vadel explained.

“We talked a lot of about the rituals of the art world, which fascinated him. The way the works here are manipulated, which will necessarily damage them; the idea that they’re sometimes hidden, sometimes revealed to visitors, goes against everything you expect from an exhibition, which is traditionally a static object, a space of conservation where the works must absolutely be glorified,” she added.

Margiela’s obsession with absence, fragility and the passage of time permeate his work. A scrolling billboard shows a photograph of a photocopied pastel drawing of skin with body hair. A bus shelter is covered in synthetic fur, inviting the viewer to reconsider the role of urban furniture.

“What you discover is a great silence. Absence was a very important element for Martin in designing the scenography and this exhibition. He wanted a lot of life and a lot of moments where, actually, there is nothing to see,” the curator said.

Hair is a recurring theme. It turns out the Belgian designer comes from a family of hairdressers. “He grew up in a hairdressing salon and spent years watching women emerge from the salon with flawless hair and perms, and it traumatized him. He now adores slightly wild, loosely styled hair,” said Lamarche-Vadel. “What he saw all those years at the hairdresser may have scared him about the way we treat ourselves.”

In “Triptych,” Margiela reproduces in oil paint on oak panels the extreme enlargement of an image found on packages of beard dye, in a comment on our futile attempts to mask the signs of aging. His “Hair Portraits” consist of vintage magazine covers from the ‘60s and ‘70s with collages of hair covering the faces of stars like Catherine Deneuve or Monica Vitti.

“His work brings attention to discreet things and their ability to shape our experiences of the world,” Lamarche-Vadel said in a text accompanying the exhibition.

Some might read his commentary on art world conventions as parody. Others might view it as a show about nothing. At any rate, the exhibition is sure to generate lively debate about what constitutes art.

The reclusive designer, who retired from fashion in 2009, has been the subject of multiple fashion exhibitions in recent years, as well as a 2019 documentary, “Martin Margiela: In His Own Words.”

For his first foray into art, Lamarche-Vardel said Margiela tested the mettle of the workshops at Lafayette Anticipations, the 24,000-square-foot cultural space designed by Dutch architect Rem Koolhaas’ OMA agency that opened in 2018.

For “Lip Sync,” he had them tattoo images of mouths, taken from videos of lip reading, with a laser on flesh-colored silicone plates. “Red Nails,” a sculpture based on the clichéd vision of femininity associated with false fingernails, was made from lacquer on fiberglass, with a scale model rendered in Nymphenburg porcelain enamel.

“It was really two years of very intense work,” said Guillaume Houzé, director of image and communication at Galeries Lafayette Group. “Deep down, he’s always been an artist.”

Antwerp Museum Goes Back to the Future With Margiela Show