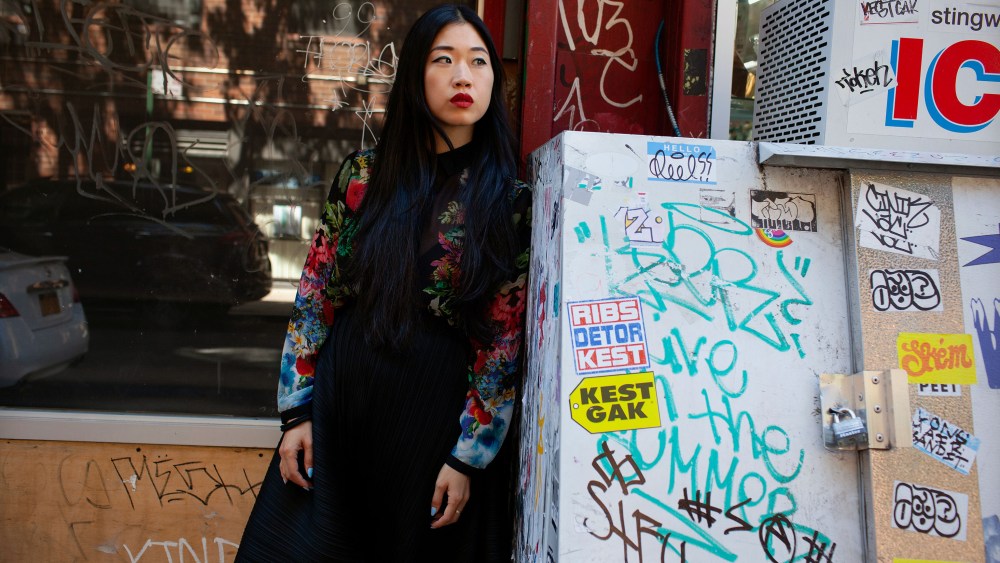 What is author Mary H.K. Choi doing in a bodega? Surrounded by Swiffer refills, dry salami and a frozen case filled halfway with Haagen Dazs ice cream and plastic cups of ice, she’s walking through the aisles, right at home.

She runs her hands through the plastic flaps covering the cold drinks, and says, “I want a pressed coconut water,” perhaps in reference to a running joke featured in her second novel, “Permanent Record,” which hits shelves today.

In Choi’s YA book, the main character, Pablo Nerudo Rind, is a college dropout who works at a New York City bodega not unlike the place in which Choi is now standing. Scratch that — where he works is a fancy health food store-cum-bodega, not a true corner store like this one, which sells plungers and brooms next to barren shelves while a cat roams around.

Pablo, an antihero of sorts, is procrastinating about getting his life back on track after being kicked out of New York University, when an unlikely love interest — the megapop star Leanna Smart — walks into the bodega while he’s working. They strike up a romance and, in the process, Pablo goes through self-loathing, depression, anxiety — then learns a lesson about himself and the people around him.

The book touches on many topics pertinent to Gen-Z kids today: the effect of social media on the psyche, mental health, feelings of inadequacy, imposter syndrome. Sure, the audience meant for this book is between the ages of 13 to 24, but the issues Pablo faces are universally felt. As Pablo’s father Bilal tells his son in one scene, “Life isn’t a destination. It’s the continual practice of things that make you wiser and happier.”

Choi came to realize this statement held truth in her own life around “the time when I was writing my second novel,” she says, feigning contemplation. She’s abandoned the bodega — coconut water in tow — and has walked down a NoLIta street to a nearby park, where she pops out a black umbrella to shield herself from the sun. Wearing a black pleated skirt, black leather platforms and a black floral button-down with bright red lipstick, she is a picture of New Age Goth.

“No, but really. The sophomore slump isn’t just a cute, alliterative phrase. It’s an existential crisis that apparently every human creative goes through,” she says. “[After her first book, ‘Emergency Contact,’] I was like, ‘OK, well, I have to write another bestseller or I’m going to die.’ After awhile, you have a certain amount of expectation about what things will feel like, about how much better your life will be when something amazing happens. But in my experience, that good feeling and that high ends — and it ends pretty quickly. That’s the whole conversation that Bilal has with Pablo. It’s not about these finite moments of wins and losses. You’re left with the decision of acknowledging what data you’ve received, what you’ve actually learned and then applying that to the rest of your life.”

Choi — who’s of Korean descent and was raised in Hong Kong before she moved to Texas, then settled in New York — also knows what it’s like to come from a blended background. There were mixed folks everywhere, and, as she puts it, “Growing up in a British Crown colony, everyone was a little bit fish out of water.”

Choi cut her teeth as a journalist writing celebrity profiles and culture-related features for a variety of web sites and magazines. Interestingly enough, she co-wrote “The Keys” with DJ Khaled, which came to be known as his business book. So when it was time to write “Permanent Record,” the reporter within her emerged; she already knew a bunch about youth culture after covering it and putting that knowledge to use for “Emergency Contact,” and she knew she wanted Pablo to be a biracial character, with Korean and Desi heritage. She talked to Pakistani kids, she talked to other Asian kids, she tapped her own experience as a Korean person.

Pablo’s relationship with his immigrant parents is a plot line that barrels into central themes of “Permanent Record.” He feels guilty that he’s not doing anything with his life, toiling away working nights at the health food bodega, but he’s so debilitated by his own sense of failure that the thought of making any kind of change paralyzes him further.

“Feeling like a failure is a real condition sustained with youth culture,” Choi says. “If you’re not famous by your early 20s, then what is even the point? You’re going to be destitute and your immigrant parents who gave you everything, who sacrificed everything so you could have more, are gonna be devastated. Pablo is cool and he’s grown up in New York, but he still has immigrant parents. There is a truth to the innateness of that kind of pressure with immigrant kids, and I wanted to talk about that.”

Choi sees parallels with her own life — moving to New York, hoping to make it in media, then actually making it in media and achieving her dreams, but still feeling inadequate. For now, she’s brushing that aside while she continues promoting the book and attempts to enjoy the journey.

“I’m really grateful everything happened when it did,” she says. “If I had to go on book tour when I was younger, I would have been a mess. I wouldn’t have been able to do anything with the scrutiny and the pressure would have been insane.”

With that, she leaves the park, walking in the opposite direction of the bodega.