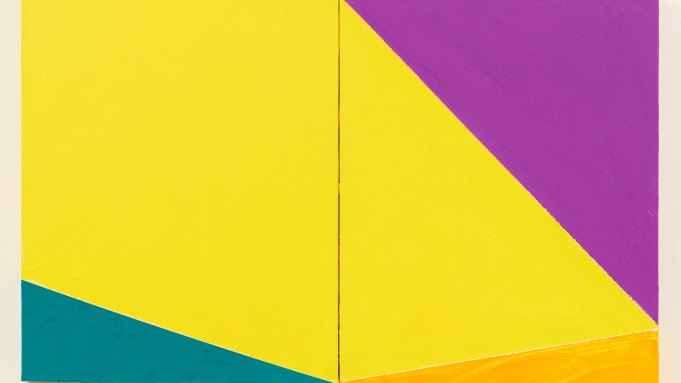 Long Island has been a place of inspiration and solace for many artists throughout the past century, from Jackson Pollock to Willem de Kooning. And the spit of land stretching out like a lobster’s claw east from New York still plays a strong role in the art world. Mary Heilmann, known for her minimalist paintings, has been a resident of Long Island since the late Eighties and this summer, she has an exhibition of her work on display at the Dan Flavin Art Institute around the corner from her house. The show, organized by the Dia Art Foundation, features six of her works.

The late Flavin, also a renowned minimalist, converted an old fire house in Bridgehampton, N.Y., in 1983 into the Dan Flavin Art Institute, a space that holds a permanent collection by the artist and a gallery available for changing exhibitions. He too had a longstanding connection to the East End, and lived there until he died in 1996.

“I’ve been in there a lot and I was a fan of Dan Flavin, I am a fan of his work, I love his work,” Heilmann says. “And I was inspired to move to New York [from California] partly to be close to that scene, those artists that were making that minimal work.”

Heilmann never met the artist, although they traveled in similar circles. “There are lots of people out in Long Island who have heard about him or have known [Flavin]. So, even though I didn’t know him at all, I asked a lot of questions and heard a lot of stories about him,” Heilmann continues. “And then when I’m in this room where he worked, I can feel the energy of Dan Flavin’s memory. So I feel like I’m near with him.”

Two of the featured works on display are responses to Flavin’s “Icons” — a series which Heilmann describes as “light pieces with electric light bulbs in little fixtures and in the corners of the paintings.” Her two paintings, “Red Mirage” and “Green Mirage,” will emulate the style of Flavin’s works by also highlighting the corners of the canvases.

“I love the fact that ‘Icons’ is a thought connected to religious imagery. That was a big part of my growing up, always seeing the iconography of Catholicism when I went to church when I was a kid,” Heilmann says. “And I think that that had an influence on my wanting to make images as an artist as I grew up. And that’s part of Flavin’s heritage, too,” she continues, referring to the artist’s training for priesthood. “I didn’t ever know him, but I know he grew up in the Catholic culture and I liked that we had that in common.”

Heilmann’s exhibition will be on view at the Dan Flavin Art Institute until May 27, 2018.