The six-part series, "Mary McCartney Serves It Up," is available on discovery+.

Mary McCartney recruited a few of her most recognizable friends to help highlight the ease of plant-based cooking.

The photographer, cookbook author, animal activist (and daughter of a famous musician) is always making up new recipes. Now, there’s a video record of some of her original dishes — McCartney is hosting her own cooking show, “Mary McCartney Serves It Up,” which debuted this week on the new streaming platform discovery+. Each episode, she’s joined by a famous guest to cook with her onscreen, including Kate Hudson, Mark Ronson, Liv Tyler, Gayle King, Dave Grohl, Cameron Diaz and Nicole Richie. 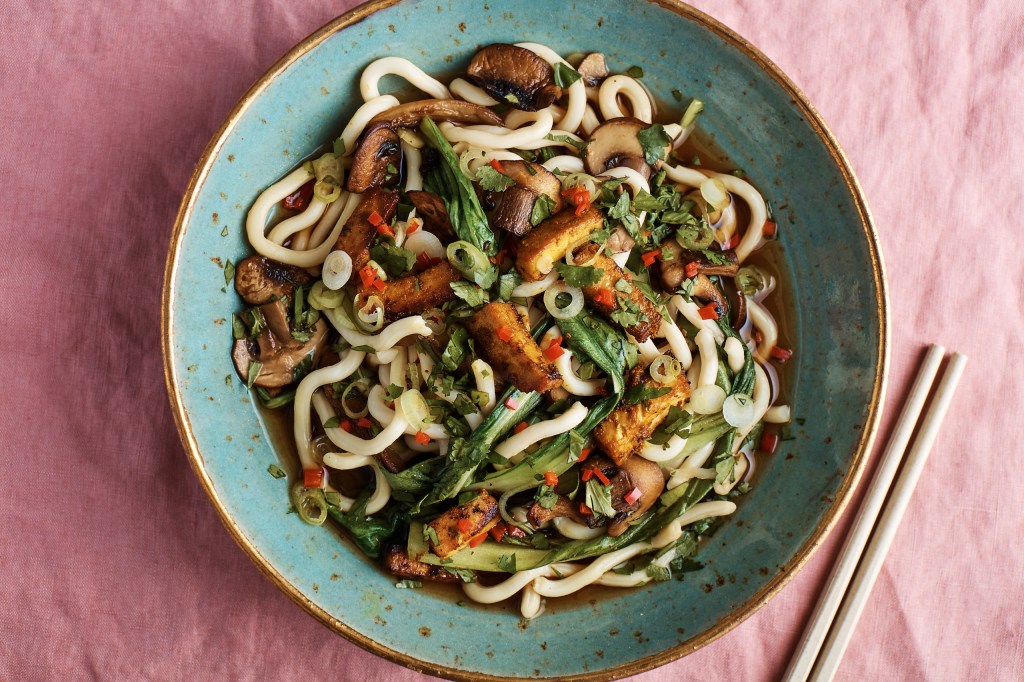 McCartney had been wanting to film a cooking show for awhile, but when the lockdown happened in March of last year she assumed it wasn’t going to happen. Discovery+ reached back out to her in June, and then they started filming the series in July. “It’s the way I love to work, you have a focused amount of time,” says McCartney of the quick turnaround. “It focuses the mind.”

The series is six episodes, each with a different theme — easy entertaining, comfort food, remixed classics. While Ronson and Tyler, both based in London, were able to join her in the kitchen, McCartney cooked with her other guests over FaceTime. The restrictions were partially due to the pandemic, but McCartney notes that it’s also authentic to how she actually cooks with many of her friends who are based Stateside. 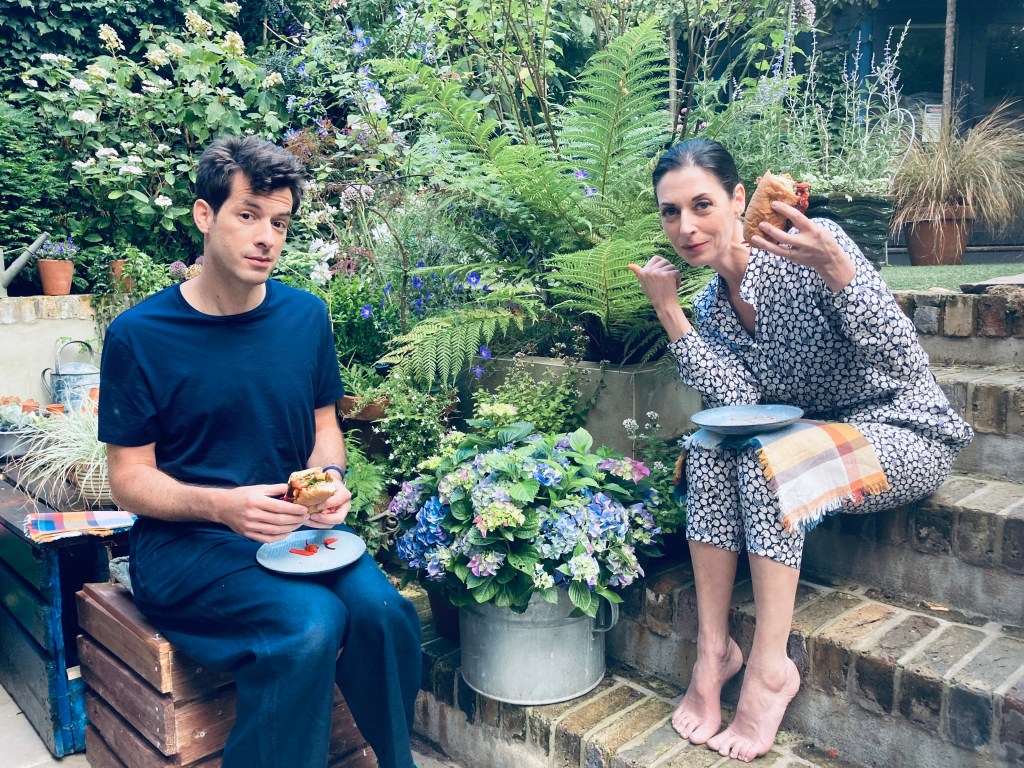 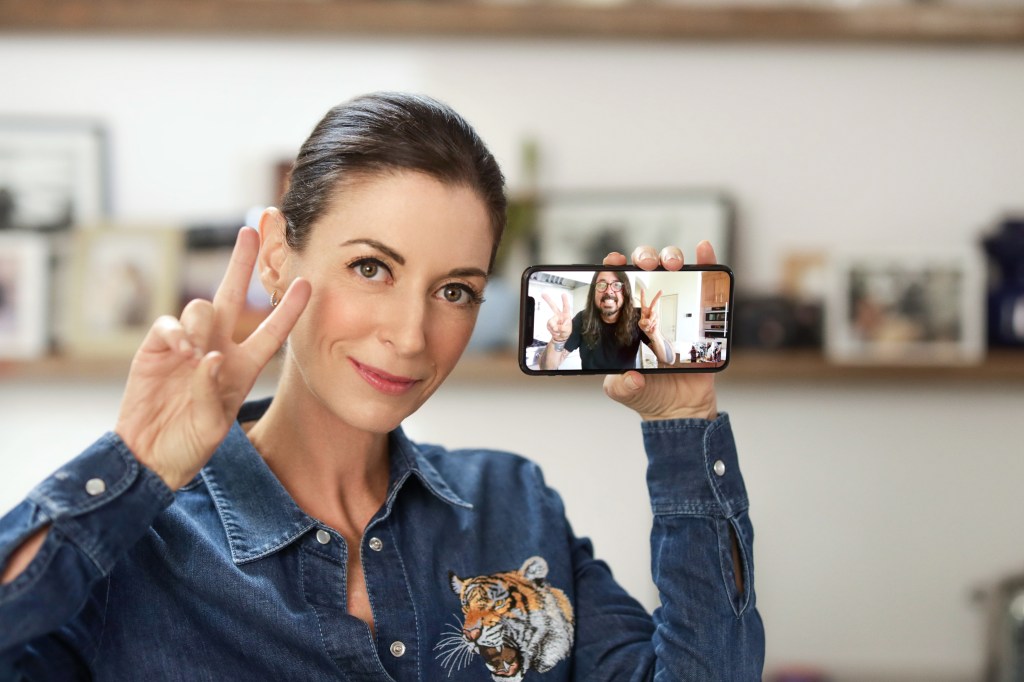 “Sometimes I’ll be cooking and I’ll think of somebody, and then I’ll FaceTime them and I’ll rest my phone up against a jar of olive oil,” she says. That’s how she connects with Hudson, the guest featured in her first episode. The pair make maple vodka peaches together, as Hudson’s partner lingers on the other side of their kitchen window and films additional footage on his phone (and occasionally chimes in). The result is an intimate look at what celebrities are like at home and in the company of friends. It’s a vibe that McCartney hopes is reflected in her cooking style: casual and relaxed.

While McCartney has published several cookbooks, she’s more used to being behind the camera. The show format, however, allows McCartney to reach and engage new audiences. “When you see somebody cooking, it brings life to it. And I think it shows how quick the recipes are to cook, and how simple the ingredients are, and straightforward,” she says. 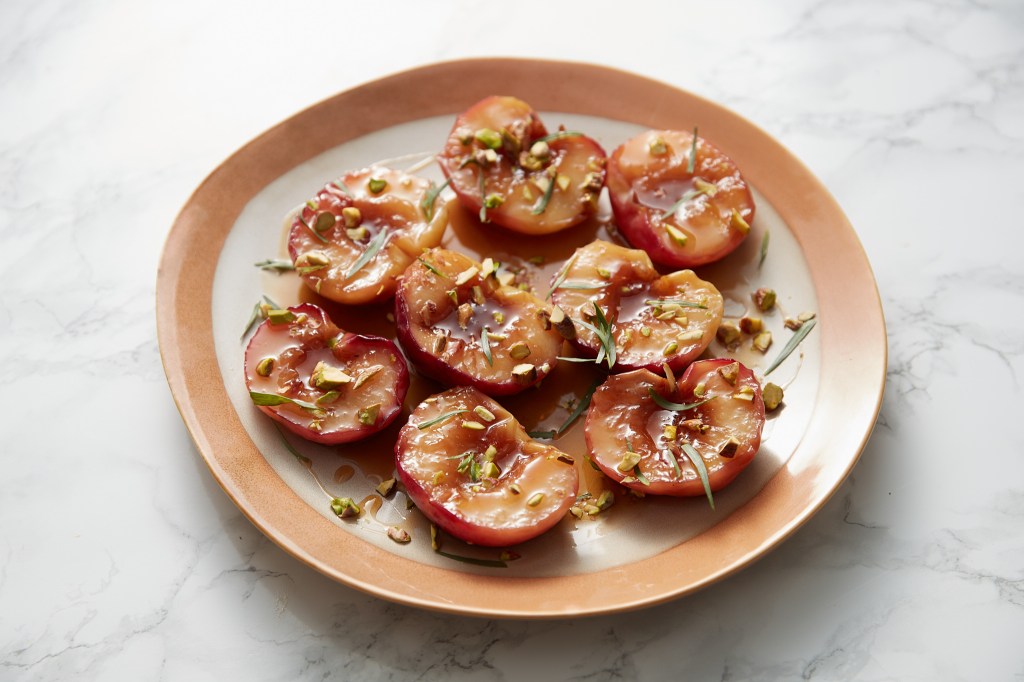 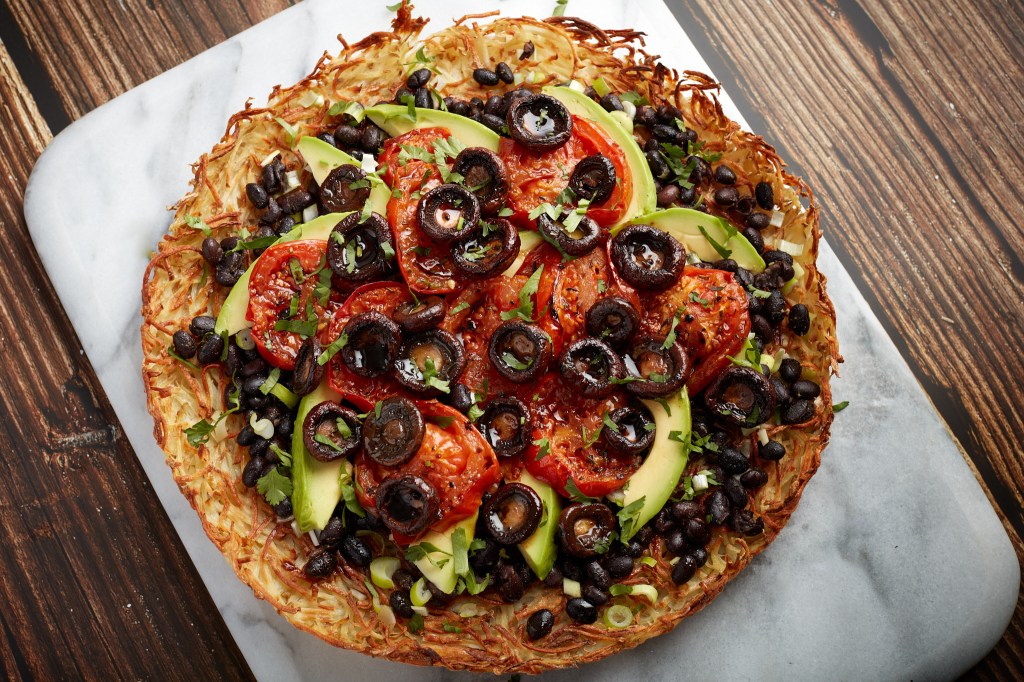 When mapping out recipes for each episode, McCartney started with broad themes and thinking about what she’d want to eat. “Often I’ll start with an actual recipe title and then it’ll go from there,” she says. Results include turmeric tofu noodles, moreish mushroom salad cups, and banoffee cheesecake.

While not billed as a plant-based show, all the recipes are vegetarian. “I grew up in a vegetarian family, so I realize that makes it very different for me,” she says — both of her parents (that would be Paul and Linda McCartney) became vegetarian in the ’70s.

“I eat meat-free because of the environment and climate change, and animal welfare,” says McCartney, who’s also the cofounder of the nonprofit Meat Free Monday. “The facts say that eating a plant-based diet is one of the most significant things you can do if you want to help the environmental impact.” 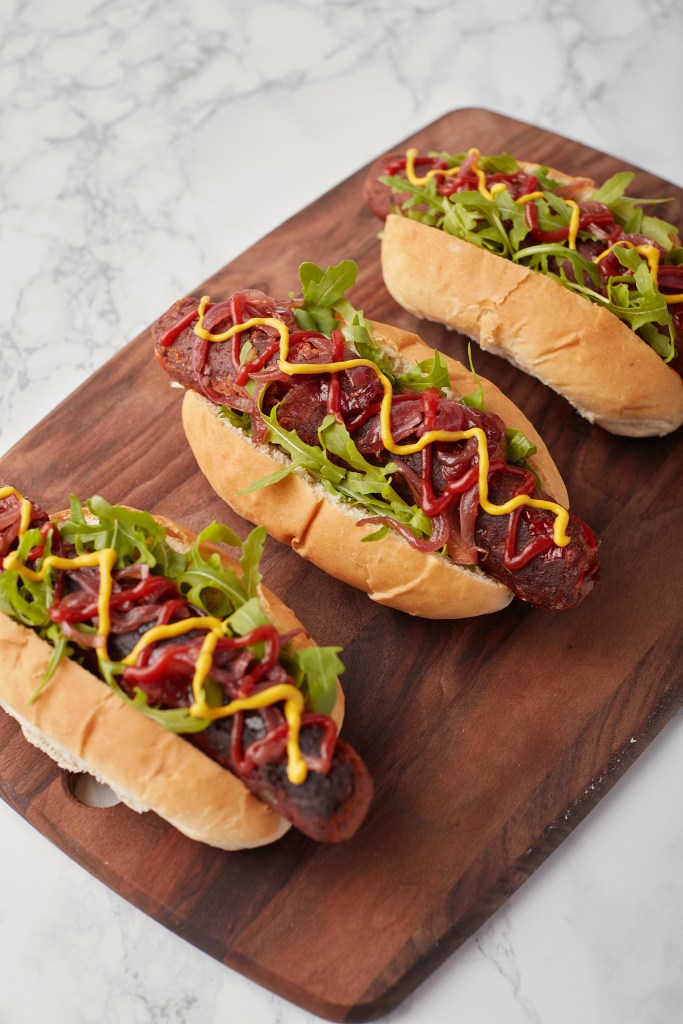 However, she knows that plant-based can be overwhelming for people who grew up in meat-eating families. And fear for the future isn’t always a good motivator when it comes to food. Her approach to plant-based cooking is about showing people that it’s straightforward, easy, fun and memorable.

“Lets just go into the kitchen, lets get some nice ingredients, and lets tantalize our taste buds,” says McCartney. “My job is to entice people over by saying this is delicious — don’t you think this is delicious? And then you naturally do it. If someone preaches to me and tells me to do something, often it won’t get through to me. But if they show me something and I find that attractive and I agree with it, then I’m much more likely to try it out.”

Like many others, McCartney’s fondest memories are around a table with friends and family and based around the communal experience of food.

In the series, she taps into that sentimentality and asks her guests about their food memories — the first dish they ever made, their favorite vegetables, secret guilty food pleasure. For McCartney, the first thing she remembers making is brownies alongside her mother as a child, before moving onto fresh pesto and pasta dishes.

Her next projects take her back behind the camera. She’s working on a new cookbook, tentatively titled “Feeding Creative,” for which she plans to make dishes for and eat with creatives she admires, and once they’re done eating, she’ll take their portrait. She also recently started the creative process and research for a documentary she’s directing, “If These Walls Could Sing,” about the history of Abbey Road Studios.

As the name of her cooking show suggests, McCartney is always serving up something new. 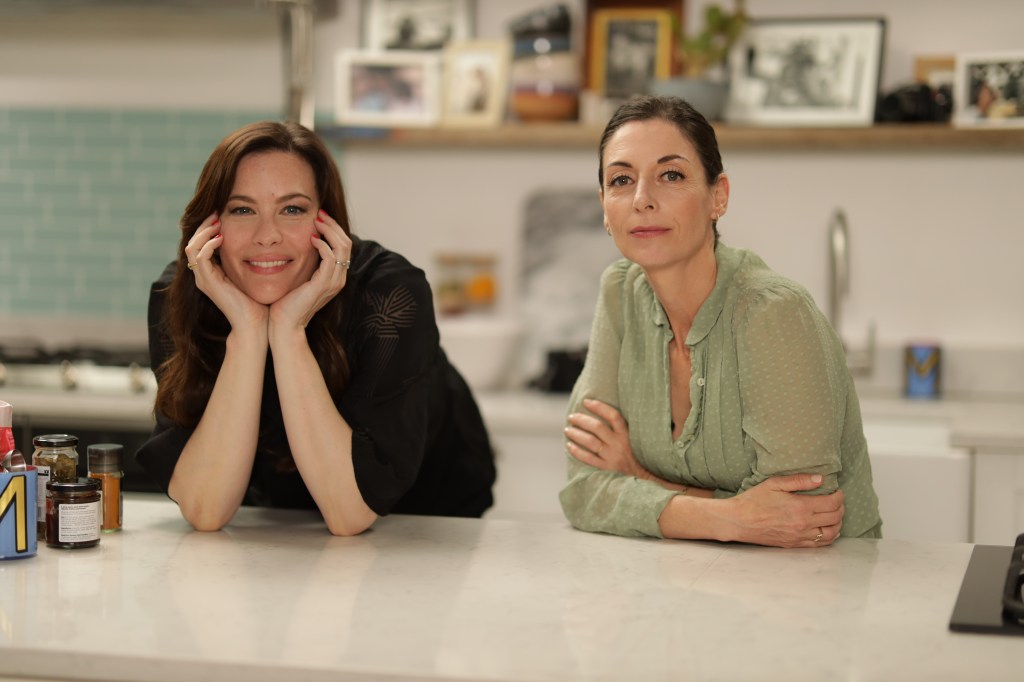 12 of the Most Exciting Films to Premiere at Sundance