It’s clear that Mason Gooding’s ceramic mug says something along the side of it, but thanks to the muddled reality that is Zoom, it’s not exactly obvious what. When asked, Gooding politely clarifies if he’s allowed to cuss (by all means), before reading off the mug: “You’re awesome. Keep that s–t up.”

It was a gift from his “Love, Victor” costar Isabella Ferreira, and it’s getting a lot of use these days: “I’m a single man living alone, so any gift people give me gets the most use out of it,” Gooding says, playing with the few curls that peek out from his baseball cap.

The messaging, though gifted, isn’t off-brand for the 23-year-old, who through the pandemic has been holed up in the West Hollywood apartment he moved into at the end of 2019 to be closer to Paramount studios while shooting “Love, Victor,” the newly released series spun off from YA smash hit “Love, Simon,” in which he costars.

“It was, like, ‘Oh, this will be great. I won’t spend much time in the apartment anyway.’ Cut to now, I know every nook and cranny of this motherf–king place. It’s OK. It’s nice,” he says. “I get to know my complex a little more, both figuratively and physically.”

The apartment is the first time he’s lived alone since leaving NYU after his sophomore year; there was a stopover in Brentwood with his family (the usual course of action after dropping out of college, he deadpans), and then moving in with his then-girlfriend in Beverlywood (“obviously, breaking up tends to reconfigure the living situation”). Work has ground to a halt, and the busy spring of shooting and promoting his new series evaporated quickly.

But Gooding, the son of Cuba Gooding Jr. and Sara Kapfer, is nothing if not Mr. Positive. Perhaps Ferreira was onto something.

Mason Gooding grew up in the Valley, and credits his father’s career for influencing his own interest in acting — eventually.

“Obviously, before you turn five you have no cognizance of what your parents do,” he says. “I just assumed my dad was actually a bobsledder who rode a sled with dogs.” (As in “Snow Dogs.”)

As he got older, he came to realize that entertaining people with both “your personality as well as different characters that you can embody,” as he puts it, was something he was both interested in and naturally good at.

“I’ll be honest with you — I’m not very good at much else,” he says. “It felt, like, as I grew older, once I realized that was a viable career path, I was, like, ‘I don’t know if there’s anything else I’d love to do but entertain and try and incite the way people view themselves through characters which I portray.’”

He wasn’t sold on the idea of going to college, wanting to try his hand at acting immediately, but after visiting his dad on set in New York, he warmed to the idea of attending NYU. Two years in, he had a manager and an agent and had started booking roles: “Ballers,” “Booksmart” and the Netflix movie “Let It Snow.” The missed schoolwork was piling up and he was of a mind to strike while the iron was hot with acting, but his mother was less convinced.

“Obviously given her experience, she was married and lived with an experienced actor firsthand, she was, like, ‘You are giving up a concrete future with a degree to chase the least stable industry.’” But I was, like, ‘I think I can do this.’” 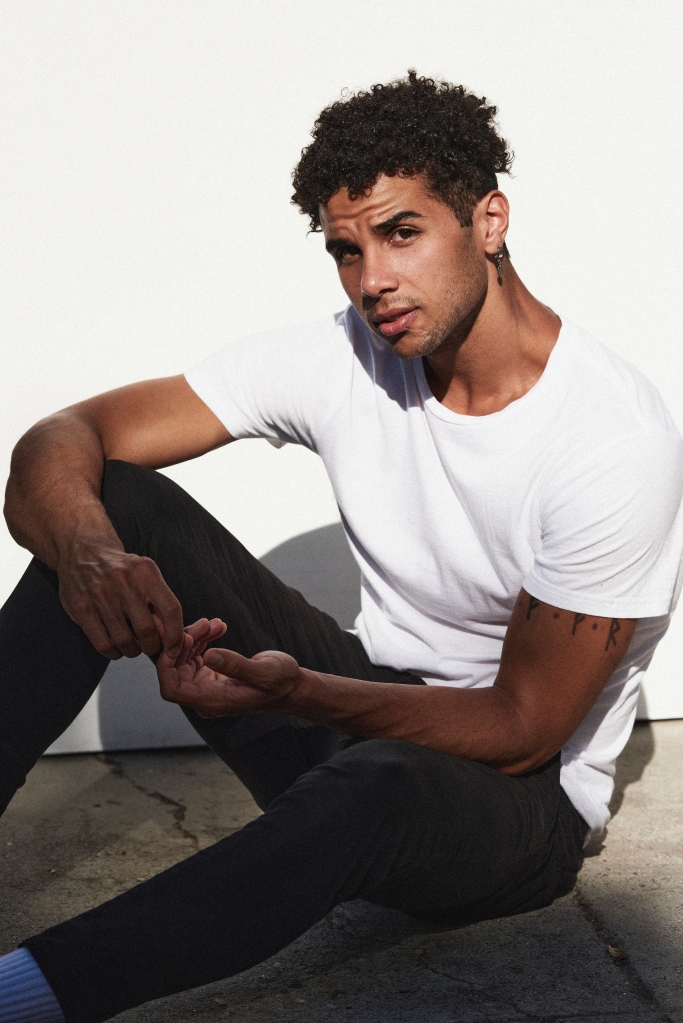 Gooding is the rare Hollywood scion who is acutely aware of the leg up he’s been given because of his birthright.

“I’m never ever going to deny the fact, nor do I think that people should be afraid of relating whatever success I may have found, to the foundation that my father led,” he says. “I have the privilege and the luxury of performing and having a net to fall into in the sense that my father can obviously provide for me and did up until I left the house and whatnot. That, to me, I think is a huge recipe for why a lot of people find the ability to succeed is because they feel like they have the room to fail. And I thank him every day for giving me that sort of privilege, and I’m trying to make the best with what my parents gave to us.”

His real “a-ha” moment with the industry, and his place in it, came much more recently — almost too late, he says.

“I watched ‘Black Panther’ in 2018, and I didn’t know, shamefully, that people that looked like me, Black people, could be as heroic and propped up in such a beautiful, magnificent way by a system that more often than not chooses to do the opposite,” he says. “When I saw that movie and I realized that at that point, in 2018, I was 21, I was, like, ‘It’s a little late for me to feel empowered,’ because I already have a certain level of cynicism in my way about me. But I was, like, for this movie to [mean] to 10-, 11-, 12-year-olds what I wish I had at that age, I’d be dumb not to try my best to find a way to encapsulate that for a younger audience.”

His first feature film was Olivia Wilde’s “Booksmart,” an experience so supportive and encouraging he says it spoiled him.

Yet he was able to find a similarly positive experience with “Love, Victor,” which follows a Latinx high schooler, Victor, who is new in town and grappling with his sexuality. When the show premiered on Hulu in June, it was the most watched drama on the streaming service that week, and was the most-binged original drama on Hulu in 2020 during its first week.

“I think that just transcends a community,” he says of the show’s poignancy. “I, to this day, still question everything about myself and who I am sexually, romantically, professionally. And so when you have a story that deals with that in such an honest and inclusive way, I’m, like, how can people not gravitate toward it? I do. I’ve watched the show a couple times now and I’m still moved by the masterful performances in and around the show. But if you get me started gushing about the ‘Love, Victor’ cast, we’d be here for hours and hours and hours. I don’t mind it.”