At the Cinema Society and Piaget screening of "Revolver" on Sunday, the film's director, Guy Ritchie, and his wife Madonna were asked every imaginable... 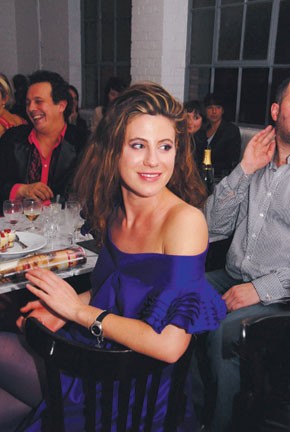 At the Cinema Society and Piaget screening of “Revolver” on Sunday, the film’s director, Guy Ritchie, and his wife Madonna were asked every imaginable question about their marriage and life in general.

What did she first notice about Ritchie?

“I found him very sexy because he looked like he’d just gotten into a fist fight.”

What has he learned about fashion from his wife?

“Not to wear the same dresses as her,” deadpanned Ritchie.

Meanwhile at the Kodak Theatre in Los Angeles, Beyoncé Knowles kicked off the inaugural Movies Rock with a rendition of “Somewhere Over the Rainbow”; Jennifer Lopez and Tony Bennett sang a duet of “White Christmas”; Queen Latifah wowed the crowd with “Big Spender,” and Mary J. Blige took to the stage with John Legend for “As Time Goes By.”

Perhaps most remarkably, Pussycat Doll Nicole Scherzinger outshined presenter Lopez. Dripping in more than $3 million of Neil Lane jewels, including those on her lash line, Scherzinger said, “I’m performing ‘Diamonds Are a Girl’s Best Friend,’ so of course I have to bring it.”

Across the pond on Thursday, Londoners hit Bistrotheque to celebrate the launch of Gap’s (Product) Red designer collaborations. “Sit down, sit down for pass the parcel!” cried Katie Grand as she tried to marshal guests including Elle Macpherson, Francesca Versace and Giles Deacon to their seats for a post-dinner round of the children’s party game. Up for grabs were (Product) Red T-shirts by Deacon, Henry Holland and Proenza Schouler, and a Mulberry Roxanne bag re-created in jersey.

“These are better quality than mine,” said Deacon to Agyness Deyn, upon checking out the goods.

That same evening, Stella McCartney invited pals over to her London shop for the switching-on of her holiday lights and her one-off collaboration with Notify, with proceeds going to the Marine Connection, a U.K. animal and ocean charity.

McCartney’s quite possibly the only designer in town who serves a no-meat menu, but that didn’t stop guests including Linda Evangelista, Emma Freud, Lynn de Rothschild, David de Rothschild, Natalie Imbruglia and Zaha Hadid from partaking of the hot chocolate, mulled wine and bite-size veggie feast. “They’re so-o-o cute!” cooed Twiggy as she scooped up a mini veggie burger and popped it into her mouth.

The London Community Gospel Choir and Lail Arad took turns performing as a very pregnant McCartney, whose third child is due at the end of the year, energetically greeted guests. “I’m almost there,” she said, patting her bump.