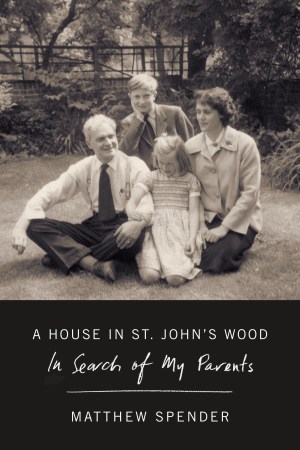 “I’m an occasional author,” says Matthew Spender. “I wrote a book about my father-in-law Arshile Gorky. I can’t write about things that are not real to me.”

Spender, the son of the English poet and essayist Sir Stephen Spender and the concert pianist Natasha Litvin, is a sculptor and writer whose previous books include “From a High Place: A Life of Arshile Gorky” and “Within Tuscany: Reflections on a Time and Place.”

He has a new book due out from Farrar, Straus and Giroux on Oct. 27 called, “A House in St. John’s Wood: In Search of My Parents.”

Matthew Spender’s parents had an unusual relationship in that his father — who was a close friend of the poet W.H. Auden and the novelist Christopher Isherwood and who, along with them, was deeply involved in the freewheeling gay scene in Germany during the Thirties — married two women, intending to spend his life with them. (Auden married Thomas Mann’s daughter Erika in 1935 solely to get her out of Nazi-occupied Europe.)

“I knew about it without anything having to be explained,” he says. “People say, ‘Wasn’t it a terrible shock? Didn’t you sympathize with your mother?’ During my parents’ lives, the institution of their marriage worked extremely well. I didn’t feel that I had the right to say ‘How come, Dad, you go on pursuing young men? How is it that you pretend that everything is absolutely perfect when obviously there are things that you’re missing?’”

For his part, his father had once written to Christopher Isherwood, “I find the actual sex act with women more satisfactory, more terrible, more disgusting, and in fact more everything. To me it is much more of an experience, I think, and that is all there is to it…The effect is funny, because I find boys much more attractive, in fact I am more than usually susceptible.”

“A House in St. John’s Wood” begins on a startling note, with a description of Matthew’s mother’s death — in 2010, 15 years after that of his father — and the fact that Matthew Spender found documents by her bedside that were intended to exclude him from his literary inheritance. But they had never been signed. He brought them to a lawyer and asked if he had to abide by his mother’s wishes.

“‘A lot of old ladies leave things just a bit too late,’ he [the lawyer] said. And casually he dropped them in the trash…The lawyer added soothingly that, as we [he and his sister Lizzie] were our parents’ sole heirs, the literary executorship was of minor importance.”

Matthew’s mother had an immensely proprietary attitude about her husband and their relationship. “I was very angry with her, I must say,” he notes. “I found her funeral to be a very aggressive occasion. I wasn’t much in it….[Excluding him from being his father’s literary heir meant] ‘I do not want you to reinterpret my idea of what that marriage was even after I am dead.’ Thank you very much, you can say that, but once you’re dead, you’re dead. I did resent the fact that she wanted to suppress his imaginary life. It wasn’t especially promiscuous, predatory or exploitative — on the contrary, it was extremely romantic. It centered around building an imaginative life between two people. I knew this at the time; it had something to do with creativity.”

In “A House in St. John’s Wood,” a number of Spender’s relationships with men are described, including that with writer Reynolds Price, an important source for the book, which was romantic but not sexual, his involvement with American biologist Bryan Obst, which might have been sexual, and that with a man he calls Maseo in his journals, whom he met while visiting Japan, which almost certainly was.

A great many letters between his father, mother and a wide variety of public figures were held in archives all over the world. Matthew Spender saw it as his mission to create a nuanced portrait of his parents’ marriage before a sensationalized version of it appeared elsewhere. “In his letters, my father was extremely indiscreet, especially before he met my mother,” he says. Matthew adds that he thinks that Lizzie, who is married to Barry “Dame Edna” Humphries, won’t like the book, because she would have preferred to abide by the image of their parents’ marriage that they had created.

Matthew, for his part, married Maro Gorky early in both their lives, and the two are still together. They live in Tuscany, where they moved, he admits, partly to get away from their families. Both clans were full of larger-than-life figures, with an undercurrent of obsession with success. Her father hanged himself at 46 because he was afflicted by a series of calamities, including having his studio burn down, enduring a colostomy and having his wife, Agnes “Mougouch” Magruder, launch an affair with another artist, Roberto Matta. Then she took their two daughters and left him.

Spender describes his mother-in-law, a beautiful, charming woman who was a force of nature and very attractive to men, by saying, “She was a power. She was like a galleon sailing across the sea to attack another merchant man.

“You could say my wife and my mother-in-law were locked in this duel,” he explains. “Magouche naturally felt, ‘Dammit, he was my husband, he belongs to me,’ and my wife felt, ‘He was my father, and I have a closer blood relationship.’ Children have a greater claim over your husband’s life than you do.”

As for his own marriage, “We made a sort of huge effort,” he says. “My relationship with my wife was that neither of us wanted any lies. To neither of us did that seem worth it. It would be so nice to say that a long marriage is always based on reciprocal trust. It’s more just distaste of the alternative. Her parents’ life was extremely complicated, and it ended up with her father committing suicide.

“As soon as you’re in front of the judge, you’re stuck in,” he adds. “Anything to do with love outside marriage becomes an elaborate relationship when you’ve sworn allegiance to another relationship, [not the one] that you’re having a lot of fun keeping secret. It’s no longer a world of free agency. There are vows, children, responsibility, joint bank accounts to make it complicated.

“The interesting thing about getting old — I’m 70 and my wife is 72 — is decrepitude. The bits fall off your body. Bits fall off your wife’s body. Do we have an operation? It kind of makes it easier if you’re doing it with somebody. Something which is not much discussed is how to remain happily married while falling to pieces.

Part of Stephen Spender’s power derived from his charmed literary career — for one thing, his first published poetry met with immediate critical praise. Then there was the fact that he founded Horizon in 1940 with Cyril Connolly and Peter Watson, and, most importantly of all, the detail that he was for years the editor of the influential magazine Encounter, which he launched with Irving Kristol in 1953.

In 1967, after Time, The New York Times and then Ramparts magazine revealed that the magazine was funded by the C.I. A., Spender resigned from Encounter. But he had a very good run there. One of the first things that Price said to Matthew was, as he wrote, “You have no idea how powerful your father was. All he had to do was pick up the phone to a publisher and a contract appeared in the post the next day.” Spender literally knew everyone who was anyone in the literary and cultural world. If they were from foreign countries, he was likely to have met and befriended them during the Spanish Civil War.

Revealing the back story behind Encounter changed the game, because, as Matthew notes, English people at the time felt that some type of communication with the Soviet Union was possible, and would be desirable, whereas Americans were “much more confrontational” in their relationship with that country. In addition, Spender says, there was a feeling that “because of the lack of communication between Moscow and the United States, we very nearly fell into World War III. The Third World War was not winnable at any time, and it would have been an absolutely unmitigated disaster.”

Stephen Spender, of course, was an important public intellectual. His son points out that his daughter Saskia, one of Stephen’s granddaughters, believes that the role of public intellectual — which almost no longer exists — was partly destroyed by the revelations about Encounter.

One interesting sidelight of the book is that the author Raymond Chandler, then a grand old man of American letters who was in the process of drinking himself to death, became obsessed with Litvin and had a byzantine, convoluted — though never consummated — romantic relationship with her. Chandler, who was still in mourning for his late wife Sissy, was in need of help. He adored Litvin and was very critical of her relationship with her husband. She was hoping that he would buy her a house in the country, and the idea was a leitmotif in their relationship for quite some time. The notion never came to fruition.

What did she get out of her marriage? “She was very happy to be my father’s wife,” her son says. “It gave her a feeling of security, because my father had a very assured presence in English cultural life. I know a lot of musicians who say that other musicians are very boring. ‘Give me a painter or a writer.’ But for God’s sake, she wasn’t alone in feeling that her profession had its limitations. She was free from a certain relationship with the musical world. She missed the fact of being desired, which may have been a desire which had come and gone. I think that factor was missing in my parents’ relationship.”

He writes, “My mother was tempted to leave, but a) the tempter (Raymond Chandler) was physically unattractive (and off his head), and b) she truly enjoyed the creation of a home, plus status, which marriage to my father brought with it.”