Apatow, the daughter of Leslie Mann and Judd Apatow, has done her fair share of comedies starring in her parents' films. Now she grows up and goes it alone in "Euphoria," the controversial new Drake-produced HBO series. 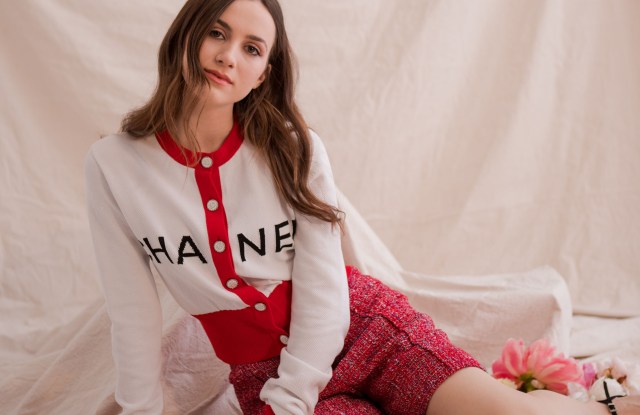 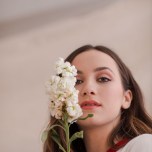 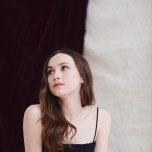 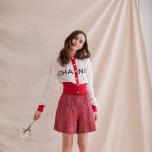 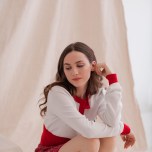 Maude Apatow, despite being the scion of two of Hollywood’s biggest comedic forces — Judd Apatow and Leslie Mann — and owning a résumé that dates back to before her 10th birthday, is not very Hollywood at all.

She professes that she’s self-conscious and awkward — and she is, but in a way that’s earnest and charms everyone around her.

She finds having her photo taken incredibly bizarre and is constantly apologetic for not knowing what to do, never mind the fact that she photographs with the ease of a model and has received early and enduring love from brands like Chanel, who have dressed her for years.

She’s not weird about bringing her boyfriend, the disarmingly polite Brit Charlie Christie, with her on set. (He takes control of the music — putting on Beyonce’s “Homecoming” and Lizzo — while she poses, the pair of them retelling their experience of seeing BTS in concert.)

After a career of roles in films with her parents, Apatow grows up and goes it alone in “Euphoria,” the anticipated new series from HBO, in her most adult role yet. The show also stars Zendaya along with a slew of other young Hollywood breakouts from Sydney Sweeney, Alexa Demie and Jacob Elordi to Algee Smith and Hunter Schafer.

Apatow is spending a few weeks in New York filming a still-untitled movie written by her dad and Pete Davidson, the first time she’s worked with her father as an adult.

“It was so different when I was young because I didn’t really understand what was happening,” she says. “And you don’t feel self-conscious at all when you’re younger — but now that I’m older I’m definitely more self-conscious, even though you’re not supposed to be when you’re acting.”

Apatow, naturally, grew up in Los Angeles and has been acting since she was a kid, but always somehow — during the summers — she attended and completed high school normally, an experience she continues to grow more appreciative of.

“I mean, there were definitely times where I wanted to act outside of school. My parents didn’t let me, but now that I think about it I’m really happy I stayed,” she says.

She acted in school theater from kindergarten on and says she never questioned whether or not acting would be her career.

“It was never a question,” she says. “It’s nice though, knowing you’re moving toward one thing. I also love writing, and I want to be a director someday. But I think that all ties in.”

She entered the industry with comedy, playing the daughter of her real-life mother Mann in “Knocked Up,” “This Is 40” and “Funny People,” all directed by her father.

“Comedy almost is harder in a way….You just gotta stay on your toes, and I’ve learned with my dad — he does a lot of improv,” she says. “I’m glad that I grew up around that. I mean, I’ve seen a lot of stand-up comedy, too, so I’ve just been around it and that’s been nice, but I don’t know — ‘Euphoria’ isn’t like that.”

Perhaps an understatement: the show, which is executive produced by Drake and premieres June 16, is already widely discussed for its extreme depictions of sex and drug use amongst teenagers. It follows Rue, played by Zendaya, who is fresh out of rehab with zero intentions of staying sober; each episode is centered around one of the cast of teenagers, each with their own secrets.

“It’s not a teenage show,” Apatow says. “It is tricky because it is really inappropriate, so it’s hard. I think it’s for late teens and up, but younger teenagers shouldn’t be watching it. But it is kind of the first time there’s been a teen show like this, which is really cool.”

Apatow first worked with “Euphoria” creator Sam Levinson — son of “Rain Man” and “Good Morning, Vietnam” director Barry Levinson — on “Assassination Nation,” the Sundance-hyped indie spectacular that went on to be a box office disappointment, but which created significant buzz for the young director. The two Skyped from her dorm room at Northwestern when “Euphoria” was first on the table.

“Sam writes teenagers really well, which is kind of weird, but he just really does his research, and everything sounds so realistic. So when we’re saying these lines it’s so easy to act because they feel like something we’d actually say,” Apatow says.

She calls her character, Lexi, who, in a sea of debauchery, is the composed, good-girl voice of reason (and childhood best friend to Zendaya’s Rue), an appropriate fit with her personality.

“We’re really similar. I’m more reserved and shy. I didn’t have a super crazy high school experience. I was kind of more shy and stayed inside,” Apatow says. “[On the show] I’m sort of keeping everyone else afloat instead of having my own chaos. But then you’ll see later what happens.”

She warns that the authenticity of the character writing should be taken with caution: while the voices are genuine, “the circumstances are heightened,” she says. “People always ask ‘Is this what teenagers are like? Was this similar to your experience?’ And I think the characters feel very realistic, but it’s also super dramatized.”

It also is unrealistic to have Drake popping by unannounced on the set of your first major job, but “Euphoria” delivered in folds.

“I only saw Drake on set one time, but he came completely unannounced and I was so nervous,” Apatow says, adding that once the pilot got picked up, the cast celebrated by seeing him in concert. “I turn around and he was standing there and I was like ‘Oh my god.’ I was freaking out.”