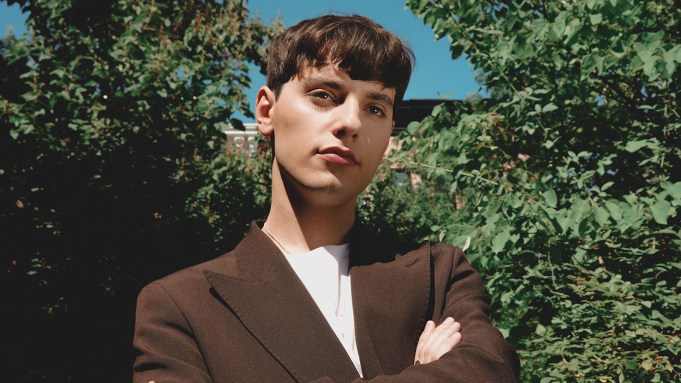 British actor Max Harwood is preparing himself for Hollywood stardom as he plays the lead character, Jamie New, in the movie adaptation of the musical “Everybody’s Talking About Jamie,” which will be released Friday on Amazon Prime.

Based on the 2011 BBC Three documentary “Jamie: Drag Queen at 16,” which followed Sheffield native Jamie Campbell’s coming out experience as his drag queen alter-ego Fifi la True at the end-of-school prom, the musical adaptation has been a fixture of London’s West End since 2017.

The movie version, which began production in 2018 and filmed in the summer of 2019, has met with several delays due to the COVID-19, but now it couldn’t be better timing for viewers to experience Campbell’s story, and celebrate the beauty of humanity, freedom — and drag — as the world gradually comes out of the pandemic.

“Everybody’s Talking About Jamie” is Harwood’s acting career debut. When he was cast, he was a student at a drama school in London and didn’t even have an agent. He got the role because one of his friends forced him to go to the open call.

“I was, like, ‘Oh, don’t be silly. I’m in my second year. I’m not good enough for this.’ And then she kind of forced me to go along to the open call. I’m glad she did. Because after the audition process of jumping through the hoops of singing, dancing, drag acting, Jonathan Butterell, who’s also the director of the film and the director of the stage show, offered me the role in the room with the casting director. Then we only had like a month or two of preparation before we started the shoot,” he said.

The film was produced by all the original creatives from the musical, and Campbell himself was also involved.

“He was on set lots of the days to be there to ask for advice and to make sure that I’m honoring his story,” he added.

To prepare for the character, Harwood went through a full-body wax, dyed his hair blonde, and got his eyebrows plucked.

“It felt like quite a transformative role for me. I’m not from Sheffield. I’m very far from Sheffield, which is in the north of England, and I live in South London. So geographically I’m in a very different accent,” he said: “I’m also very hairy, and my eyebrows weren’t like that.…Although Jamie tried his best there wasn’t much advice you can give for throwing bleach on the hair every two weeks. You know, it’s gonna fall out. It’s gonna snap.”

The film was mostly shot in Campbell’s actual neighborhood of Parson Cross or in studios in Sheffield.

“Our director, Jonathan, he’s born and raised in Sheffield, so it was really nice to have his insight on location. I think it grounds the film by having those authentic places,” he added.

As a musical, the entire cast sang live during filming. Of course, those lip-sync scenes at drag shows were not.

Playing this character — both Jamie New and his drag queen alter ego Mimi Me — also speaks to Harwood’s own queer experience in school, but the differences between him and Campbell is that at 16 when Harwood left secondary school in 2014, it was a very different world.

“I wasn’t out. There wasn’t anyone out at my school. Whereas now there are a lot more kids that come out at a young age like Jamie,” he said. “We’re similar in the sense that we were both very ambitious. And my thoughts definitely were outside of the classroom, dreaming of being an actor, singing, and I was always doing local youth shows.

“I think the show and the movie are, in truth, interestingly and importantly, not a coming out story. He’s not coming out as gay, he’s already gay. And he’s already dealing with that within himself. It’s more about a young person taking their place in the world, and in a way that feels authentic to them, and how that maybe affects their safety and I feel like that is more topical now than ever.

“Although times are changing, that’s still where we are. So it feels really nice to be giving voice to this character and this true story that happened years ago to Jamie Campbell. Hopefully, that will still resonate with hundreds and thousands of people across the world, LGBTQ+ or not,” he added.

A major cameo in the film was the surprise but brief appearance of “RuPaul’s Drag Race” season six winner Bianca Del Rio, whose real name is Roy Haylock.

“It was a flying visit but one that brought so much joy to the set and just also is absolutely exactly what you’d expect Bianca to be in and out of drag. Absolutely wicked and rotten but in the best way and also so kind and loving,” he said.

Harwood confessed that he has been a huge fan of “Drag Race” for years, and it was shows like these, and the close exposure to drag culture via the filming, that enabled him to feel comfortable with his own queerness.

“I don’t really get starstruck by celebrities. With actors who I look up to, lovely, great, but I cannot express to you enough the amount of fangirl energy I had the morning I turned up to set and I walked into that trailer and I heard Roy Haylock’s voice, which is absolutely undeniably distinct. Meeting these drag queens is as if you are meeting your favorite princess or your favorite superhero.”

As a newcomer, Harwood praised legendary actor Richard E. Grant, who plays New’s drag mentor Hugo Battersby, or Loco Chanelle in drag, as brilliant support because he “held the space so beautifully” for Harwood to step into the scene of the first day of shooting, and was encouraging during the filming process.

“I will forever throughout my whole career be grateful for what he has done to me because he could have very much easily been one of those people that tear me down, but he didn’t. For a lot of that first portion of that year, I was incredibly riddled with imposter syndrome, because I was nervous and wanted to do a good job. And helped me understand that he also suffers from imposter syndrome, even after all of his success. It was so nice to hear that from him that what I’m having now is valid,” he said.

He said he also formed a close bond with Sarah Lancashire, who plays New’s mother in the film.

“There was a time I had a bit of a dilemma with a decision I had to make. I called Sarah. She’s shooting something away in America. She picked up the phone and we had a chat for an hour. Having someone and being in a position where I can just pick up the phone and call and ask for advice is just amazing,” he added.

Fashion is a world that Harwood “doesn’t really know much about,” but he believes that, similar to drag, it is also an art form, and is willing to allow fashion to be an extension of him. His top three go-to brands are Dior Men by Kim Jones, JW Anderson and Alexander McQueen.

Looking at the future, Harwood said he wants to star in a biopic, preferably about a sportsman or a fashion designer. He is also keen on the idea of doing a superhero movie.

“I feel I have skipped so much going into a leading role in a studio film for my first film. I’ve just came off of doing an indie short film for the BFI here in the U.K. And I want to do more stuff like that, or a play or two and have my professional stage debut,” he said. “I’m working on my own music as well, which is really exciting. I’m such a creative at heart. So I write as well, and I’m just excited to just take my time with it.

“There have been a lot of people urging me to use this as a springboard. But I’m not scared to take some time and take some beats and change and grow as things go. I was 21 when I made ‘Everybody’s Talking About Jamie.’ We’re now two years on. The film is going to come out and hopefully, I’ve made another film since then that will hopefully come out next year. So it’s just about constantly moving forward and being reflective and expanding,” he added.