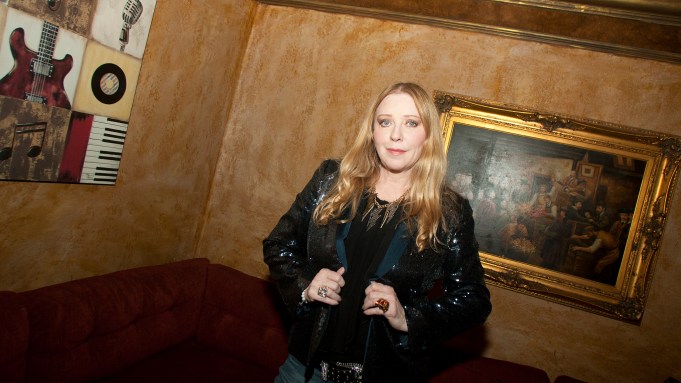 Once the epicenter of New York’s music and art scene, the Park Avenue South nightclub that Mickey Ruskin opened in 1965 is now a Korean deli and many of his patrons have long gone gray. Diehards made their way to The Cutting Room on East 32nd Street for what was also a tribute concert to the Velvet Underground and Lou Reed. Before taking the stage, Bebe Buell, in a sequined Calvin Klein jacket and jeans, was sharing iPhone photos of her grandchildren Milo and Sailor — also known as Liv Tyler’s sons.

Asked to single out a favorite memory from Max’s, she said, “That would be impossible. It was our living room. When you got home from work or whatever it was that you did during the day, you would take a nap and then get gussied up. No one even got to Max’s until 11 o’clock so you didn’t even head over there [before then.] You’d stay until 4. If I had a job in the morning at 8, I’d go home. Sometimes there were loft parties.”

The Magic Tramps’ Sesu Coleman nodded in agreement. “We were like vampires. You’d get there around midnight and then when the sun came up, it was, ‘Uh oh, it might be time to go.'”

“Hip doesn’t age well,” Timothy Greenfield-Sanders observed, as one musician walked downstairs. “It’s a very delicate balance to keep that edge as you get older because it tends to look forced.”

A restaurant for the suits by day, by night Max’s became, in the words of Andy Warhol, “the exact spot where Pop Art and Pop Life come together.”

Greenfield-Sanders recalled the red walls in Max’s “Back Room” and the Dan Flavin sculpture that hung overhead. “Red is a very flattering color. Look at Diana Vreeland. Her apartment was all red because red reflects the pinkness in your skin,” he said. “It was the first of those kind of exclusive rooms. No photographs were allowed. It was very private that way. It was Warhol’s room and only the core people were allowed in.”

With good reason — there were drugs galore — mostly speed, with some openly shooting up. “Absolutely, there was everything. People were having sex on the tables at Max’s in The Back Room. All those Warhol stars would be as flamboyant as they could to get Andy’s attention,” he said. “Brigid (Berlin) would take pictures of people’s penises and shoot up right through her blue jeans.”

Ambulances were periodically needed, but the drug culture was an element, not the main attraction. “That was a minor factor. It was just this cool place where everybody wanted to go. Everybody means about 250 people. Absolutely everybody,” Greenfield-Sanders said. “Max’s now is kind of a mythical memory. Then the music industry was so small and everyone knew each other. It was a very intimate time. Max’s also combined the art world, which was so hard to do.

“Today it’s all so big. In those days, of course, it was Warhol, The Factory, the music — everybody who was hip was there. You can’t do that ever again,” he said. “Hipness is a commodity now. It was much more transgressive then. Now everyone wants to be hip, everyone thinks they are hip, that’s what everyone strives for. Then it was you either were or you weren’t.”

Emphasizing that it was a time when drag queens risked being arrested in New York, Greenfield-Sanders said, “You could not be Candy Darling and go out on the streets.” With HBO set to air in April “The Trans List” by Greenfield-Sanders, he will soon shoot an American Masters’ film on Toni Morrison, and possibly one about Calvin Klein.

Crenshaw also recently teamed with HBO, cowriting “Christmas, You Go So Fast” for an upcoming episode of Vinyl, Crenshaw, who also lent his own musical talents to the show, said he never made it to Max’s. “I used to drive by it in taxi cabs, when I first started playing with my band in 1980 or 1981.”

Before taking the mic, The Bongos’ Barone said he is at work on a new album “Sorrows and Promises: Greenwich Village in the 1960s,” which will cover early songs by Bob Dylan, Lou Reed, Simon & Garfunkel and others when they were still playing the clubs. He also is crafting an Instagram-style photo exhibition for the Museum of the City New York.

Yvonne Sewall Ruskin hopes to perpetuate Max’s impression on the downtown scene with a documentary featuring many who considered Max’s to be a home-away-from-home. Another bucket list item is to try to motivate high school students through her charity, which focuses on suicide prevention and substance abuse. “This is the last quarter of my life, and I really want to do a lot of traveling to encourage young people to become fearless,” she said.