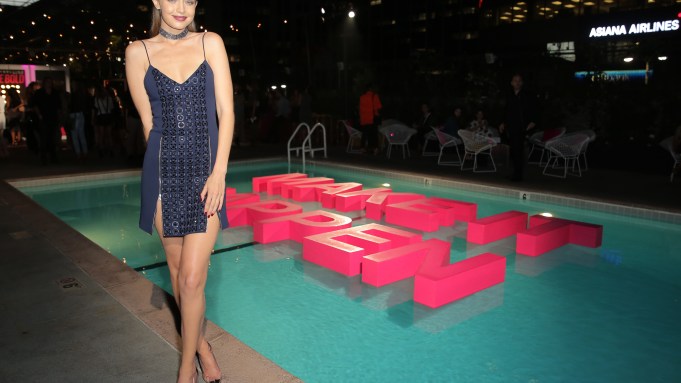 For beauty brands, Los Angeles is a city of influence or, more specifically, digital influence. So, it’s no surprise Maybelline New York touched down Friday evening at L.A.’s The Line Hotel to toast summer product launches, notably the wide-ranging collection of Color Sensational The Loaded Bolds Lipsticks, Colossal Spider Effect Mascara and Master Strobe Highlighting Stick, with its chief influencer Gigi Hadid in tow, as well as a slew of social media beauty sensations, including those going by the handles MannyMua, Patrick Starrr, LustreLux, MakeupShayla and Chrisspy. “I am so inspired by people on social media,” said Hadid. “They have so much fun with makeup, and I steal and pick from them because I love their work so much. It’s like art when they do makeup.”

Maybelline’s relationship with Hadid and the plugged-in, Snapchat-happy makeup influencer community is deepening. Although he was coy about details, Maybelline vice president Steven Waldberg revealed the brand is naming shades with digital beauty gurus and is in discussions to develop merchandise with Hadid. “She’s young. She’s beautiful. She’s very motivated. She has created a true career for herself. She’s designing product in collaboration with a lot of other brands, and we’re hoping to do a lot more with Gigi,” he said. “She’s someone that I think a lot of young girls relate to and look up to.”

The first male beauty influencer on Maybelline’s — and any mass beauty player’s — Instagram feed, Manny Gutierrez, aka MannyMua, lauded the brand’s embrace of social media makeup artists. “Usually, drugstore brands aren’t as forward in doing new things with influencers. I’ve worked with brands like Benefit and other big brands that are in Sephora, and that was easier for them to do because it was, maybe, their personality. Maybelline was very old-school, but they are changing,” he said. “It’s absolutely amazing. They are supporting anyone who wants to wear makeup.” With the beauty industry now inundated by influencers, what does the future hold for Gutierrez and his fellow YouTubers? “I would love to have my own brand inside Sephora, Walgreens, Target or wherever it may be. That’s my goal in five or 10 years,” he said. “I would say a smart move for other influencers would be to create their own brand, get on TV and just keep it going because you never know how long it is going to last.”

In the short-term, the Hadid family certainly has plenty to concentrate on. In addition to Gigi Hadid possibly producing products with Maybelline, her sister Bella recently signed on as the face of Dior Beauty. Hadid’s advice to her sibling on excelling in the prime gig is to experiment with makeup. “Since I started working with Maybelline, I’ve tried to be more adventurous with my makeup looks, and that comes with a lot of teamwork with my beauty team. We send mood-board texts and really try to do fun things,” she relayed. “I told her just to be exciting because, if you can show people how they can get excited about makeup, that’s the best thing you can do as a spokesperson.” Post break-up from Zayn Malik, Hadid expects to spend most of the summer working, but hopes to squeeze in a break, too. “I just want to be in the sun and be calm and peaceful, and not have to worry about things,” she said. “I just want to take some time off.”