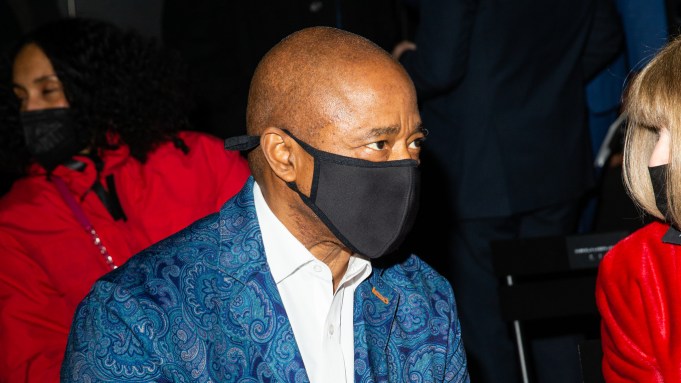 One day after unveiling a partnership to expand the fashion industry’s footprint in Brooklyn, newly minted New York City Mayor Eric Adams doubled down on his support as a front row guest Tuesday night at Michael Kors’ runway show at Terminal 5.

“I wore many of his suits throughout the years,” said Adams of his support for Kors, nodding to the comfort and fit of his designs, as well as “the energy he’s bringing New York…sending a message that New York is fashion, not only on the runways, but also just on the everyday street corners.” He called out Kors’ support for Broadway last season, when the designer presented his collection in Times Square as a love letter to the theater district.

“And so I just wanted to support him because he supported us [New York City],” Adams added. “He’s 100 percent New York. He’s a flag-waver. And I’m going to find all the flag-wavers and say, come on back to the city so that we can enjoy the great ways that this city has improved all of our lives.”

“I was able to go and participate, and I wore a nice suit that was made by one of the designers,” he said. “I’ve done fashion shows from time to time, but right now, it’s even more exciting because of the signal that New York is back.”

On Monday, Adams launched a partnership with the New York City Economic Development Corporation to expand the city’s fashion footprint in Brooklyn. Brooklyn’s garment hub, Made in New York, is planned to open this year in Sunset Park. On Monday, Slow Factory was revealed as the campus’ first tenant.

Asked about his vision for New York’s fashion industry and Garment District, Adams said he plans to “give it the support that it needs. But also I think we made a big mistake historically when we localized the fashion industry to one location. Let’s build it up there, but let’s also expand it throughout the entire city,” he added.

“Brooklyn has a vibrant fashion industry that we want to give the support to as well as the outer boroughs, not only localizing just in Manhattan. We’re going to make sure that the fashion industry survives and give it the support [it needs]. And then we’re also going to expand it out even further to show that every neighborhood can have that incubator where they’re doing local fashion, local designers, learning the back scene, behind the scenes. Not only on the runway,” Adams said.