The woman behind the clothes in Terrence Malick’s “The Tree of Life” shares a few of her trade secrets. 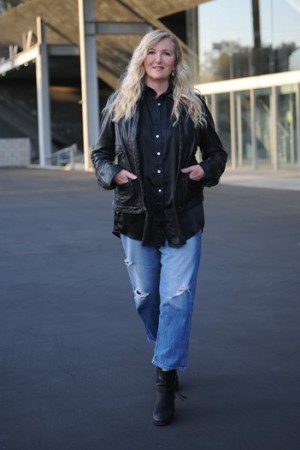 CANNES, France — By the time the lead actors come on board any film project that costume designer Jacqueline West has been hired to work on, she’ll have their characters nailed as if she were up for the roles herself. Brad Pitt, who West dressed for “The Curious Case of Benjamin Button,” refers to her as a method costumer. West, who was also behind the Fifties-era costumes for Pitt’s latest film, Terrence Malick’s “The Tree of Life” which premiered at the Cannes International Film Festival Monday in competition, describes her approach as dressing from the inside out.

“I try to go right through the onion skins of their characters, because people have many layers to their personalities,” she says.

Having started out dressing Sean Connery for “Rising Sun” in 1993, West, who is also a fashion designer, says she never gets star struck when dressing bigwig actors.

“After dressing James Bond, everything else was child’s play,” she jokes.

West sees the wardrobe as the bridge to the characters, the first place that actors start really getting into the movie.

“It’s funny because I know on this movie [“The Tree of Life”] I could tell when I fitted Brad that his whole body language changed when he was in the right clothes,” she says. “He would get very Mr. O’Brien-ish. And Brad knows, too, he’s a method actor, and he changes and will stand in front of the mirror and see him becoming Mr. O’Brien. He’s very languid and relaxed in his own physicality. And you could see the stiffness and the tension and the muscles in his neck tight when the clothes are right. So, he was a very big part of the decision making for his wardrobe.”

West also boasts her own incredible vintage clothing collection, which includes Claire McCardell pieces and a jacket that once belonged to the Marquis de Sade, which is stored in a barn at her ranch in Dentwood, Calif. American Costume made Brad Pitt’s gabardine suits for “The Tree of Life” because West wanted a specific color palette. The actor is very particular about his costumes, she says.

“He knows what’s right and wrong,” West explains. “But you have to try things on, even when I’ve narrowed it down for the character, I know that the texture, a certain feel of a shirt, or the gathering of an old shirt or pair of slacks, he’ll feel it when he puts it on. And if it’s not the right fabrication, even though the look is right, if it doesn’t have the right wear and tear on it, or the right drape, you couldn’t sell it to Brad in a million years.”

West’s work has led her to develop close relationships with many of the actors she has dressed. Nicole Kidman asked her to make her wedding dress, for instance, which she ended up collaborating on with Balenciaga’s Nicholas Ghesquiere.

Even the hidden elements of an outfit, such as the undergarments or a pocket handkerchief, contribute to the development of a character for West, who jokes that Robert Pattinson, who she dressed along with Reese Witherspoon for “Water for Elephants,” has been complaining to the press that she made him wear Thirties knickers throughout the whole movie.

“I made him put them on when he got up in the morning, and wear them all the time – even when he wasn’t on camera,” she says. “But it really got him into the Thirties.”

Jessica Chastain, who plays opposite Pitt in “The Tree of Life,” agrees West’s genius is her attention to authenticity, right down to the underpinnings.

“She created a situation where we had a room and we had all these costumes that worked for my character and in the morning I would show up and she wanted me to approach it like it was my character’s closet,” the actress explains. “So I would go in and depending on what I was filming and what the mood was, I would then choose the dress. Of course, it was all approved, but it really made me feel like, I was playing this woman and I was going in and choosing what I was going to wear for the day, which was really powerful as an actress.”

Chastain’s wardrobe in the film included a dark blue iridescent taffeta dress from the Fifties that West bought that at an antique clothing show in Los Angeles. West, who remains on set throughout the duration of the filming of the movies she works on, often gets fashion designers to recreate looks for films. She worked with Alexander McQueen for pieces for Kidman in “The Invasion,” and even borrowed pieces from the Levi’s museum for Pitt to wear in “The Curious Case of Benjamin Button.” For the more contemporary storyline in “The Tree of Life,” in which Sean Penn plays the grown son of Pitt’s character, West collaborated with Giorgio Armani on a wardrobe of suits, shirts and neckwear.

West was given eight weeks to create the Fifties-era wardrobe for “Tree of Life,” working with a small team made up of an assistant designer, a supervisor, two set costumers, a personal assistant and an ager/dyer, who was hired to make pieces look lived in.

“(Malick) likes things monochromatic and dark and sepia toned: He likes the faces to stand out,” she says. “So it was a lot of overdyeing old striped T-shirts for the boys. I had to use new jeans in boxes from the Fifties, and it was really washing and sanding and rubbing and making them look they’d be worn and played in, frayed, how boy’s jeans get.”

For Chastain’s character, she says she wanted to represent an era that for many women was not about fashion, but having a certain dignity without having a lot of money.

“They had very few clothes,” West says. “But I remember my mother being a housewife in that same era. She would try to take her apron off and change when my dad came home for dinner at night, maybe put on a fresh housedress, not the one she did her housework in.”

“We don’t make documentaries,” West says. “People go to see movies partially for their beauty, even if the beauty is ugliness. I feel that I get my job right if I get to the bottom of character and dress them appropriately, reveal their inner riches.”