For Jenny Zhang, being one of Lena Dunham’s millions of Twitter followers paid off: Her debut collection of short stories, composed during her graduate school years, is about to be published by Random House.

She met her would-be literary fairy godmother through the Internet, “as a lot of things happen for all the Millennials,” Zhang says, on a recent afternoon in Bryant Park.

“Well, she just one day tweeted at me and said she loved my poetry collection, that it’s really punk and she devoured it,” she says of Dunham. “And I was really surprised — I just thought of her the way I think of most celebrities: far and out of reach.”

The writer, 33, is the first author to be published by Dunham’s new Lenny imprint at Random House; her debut “Sour Heart,” out Aug. 1, is a collection of short stories depicting life and coming of age through the Chinese-American experience.

Zhang, a graduate of Stanford and the Iowa Writers’ Workshop, was born in Shanghai and moved to Ridgewood, Queens, “for one night” before landing in Rego Park, “the secret Murray Hill” near Flushing, and eventually on to Long Island.

“It was white working class, like blue-collar families,” Zhang says of Murray Hill. “When we moved in our next door neighbor was a plumber and the person on the other side was an electrician — an Irish plumber and an Italian electrician.”

The family moved from China so her father could pursue a Ph.D. in linguistics at New York University, which he eventually dropped out of. “But we stuck around just because it’s New York and we started making a life for ourselves here,” she says.

“Sour Heart” is a series of stories written from the perspective of various Chinese-American girls growing up, finding their identity and navigating their interwoven cultures.

“I always found my solace in writing, even at a young age, especially because when I first immigrated here I couldn’t speak English, so writing was a way to show [my intelligence],” Zhang says. “If you were to make a quick judgment call on my intelligence and articulation when I first moved to the U.S. based on my speaking skills, it would be very low. And I had a chance to show that I was articulate and able to speak and think when I wrote, so very early on I turned to writing because it was the fastest way to show someone that I had something of value to say.”

She found her voice at Stanford, when she created a writing group with a few peers, including Karan Mahajan, a nominee for last year’s National Book Award, and Whiting award winners Tony Tulathimutte and Alice Kim. “It just so happened that so many of us were Asian-American so it’s also an alternative to the perspective from the mostly white one that we were getting in classes,” Zhang says.

The group still meets every other week in Brooklyn to workshop ideas and catch up. “Three of the stories in this collection, I revised them heavily based on feedback that I’ve gotten from this writing group,” she says.

Dunham’s brand of feminism — often controversial — is a natural fit for the writer. After the Twitter meeting, Dunham invited Zhang to open on her “Not That Kind of Girl” book tour, and eventually introduced her to an agent and editor.

“Lena is a really curious person and she loves poetry — she’s just one of those people who loves picking up books that are off the beaten path, and weird poetry,” Zhang says. “I would say that these stories are like a mix of accessible — there’s a chatty quality to them — but they’re also kind of interested in making the strange familiar and the familiar strange. There are girls exploring their relationships, themselves, their friends, their sexuality, their family, girls trying to carve out an identity for themselves, and some turbulence with everything that goes on when you’re growing up. And I would say I have a pretty strong voice and point of view that for some might be delightful and for others might be absolutely agonizing and annoying.”

That crossover is where fans of Dunham might find a comrade in Zhang. “Lena has a really strong voice, and I think that’s what makes people such fierce fans of her work, but others such fierce detractors and critics, and I would say that there’s, I guess, a whiff of that in my work. And she really shows the gross, the ugly and the pathetic, and I hope I can say that I do the same in my writing.” 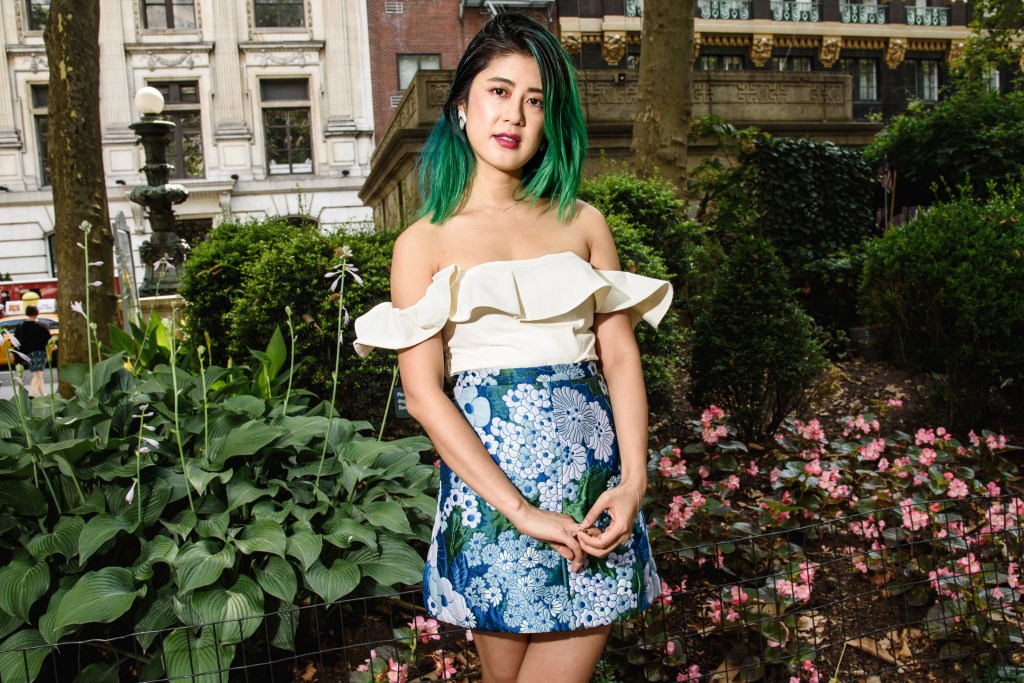 Letitia Wright on Her ‘Instinctual’ Approach to ‘Black Panther’

Danny Bruckert Has Something Brewing in Downtown Brooklyn