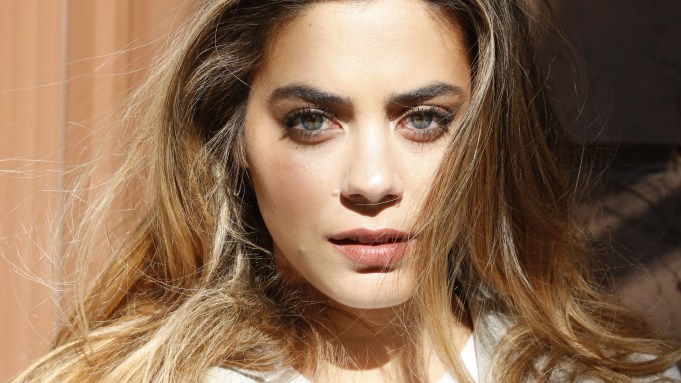 Izzo was born in Santiago, but moved to Atlanta at age 12 while her dad was getting his Ph.D. at Georgia Tech. “When I first moved to Atlanta I had a really strong accent, and I got bullied like hell,” she recalls while sitting at Irving Farm Coffee, around the corner from the Gramercy apartment she rented for her stay in New York. “It was awful. I got over my accent pretty fast, thanks to ‘Blue Crush.’ I started watching that movie and I got obsessed with Kate Bosworth. I had no idea she was Australian — to me she was American and it was all I needed to know.”

Oddly enough, she’s frequently cast as an American, a fact tinged with a certain sweetness in light of her bullies. “It’s such a payback isn’t it?” she grins.

On Sunday, she joins David Schwimmer and Jim Sturgess in AMC’s “Feed the Beast,” which follows two best friends in their attempt to open a restaurant in the Bronx, in the midst of cleaning up their lives. WWD chatted with Izzo about landing the role, meeting her director husband, and what she wore to be crowned “best dressed” in high school.

WWD: How did you get started acting?

Lorenza Izzo: I went back to Chile [from Atlanta] when I was 16, my mom and stepdad got divorced. At 18, I moved to New York to study acting for a few months. One of my hidden dreams was to be a “Good Morning America” type-show host. So I went back to study journalism [in Chile]. And my second year of college, I was offered a student film, because they knew I had studied acting, I was also a model in Chile and was very close with the fashion world in Chile. The director auditioned me and cast me, and that was my first-ever gig. I was obsessed. I was coming back from method training [in New York] and I took it so seriously. That’s when I realized, “Oh my passion is not hosting a TV show, it’s being in front of a camera and telling stories where people can feel something.”

I feel I have a responsibility as an actor, and as an audience when I watch something, to feel things. Like I don’t have to go through the breakup in “The Notebook,” for example, to feel it, but I can go along with it and be entertained and hopefully learn something about myself. And that’s what I really learned from my first couple gigs, that I’m addicted to being on set. And I love being the center of attention. I love being a goofball — so it all just sort of clicked at that time. And then of course my grades in college started going down (laughs).

WWD: Who do you play in “Feed the Beast?”

L.I.: She is so quirky and I’ve never gotten a chance to play a character like that. She’s also Latin, and I’m cast as an American always. My character’s name is Pilar, she’s Cuban. I play mostly American characters, though interestingly enough this is my second Pilar.

WWD: How did you land the part?

L.I.: It’s the craziest story. I was going to give up acting; I’m so dramatic, I’m such an actress, in that everything is so extreme! I had two major hip surgeries last year and I was out of commission a lot. I was auditioning and getting great feedback but I wasn’t getting anything. I got to a point where I was like, “It’s not about getting the job, it’s about the audition room and doing good work. It’s the one chance a day to do what I love.” I think Amy Adams said that. And I was like, “Oh my god, when am I going to get to that point?” But she’s totally right. I reached the point where I had fun in auditions, and I think that changed how people receive me.

In December, I was going to go back to Chile, I got an audition to do a self-take for a show called “Broke” [the original title for “Feed the Beast”]. I did it, forgot about it and went to Chile, then went to Uruguay, and then they were like, “Lorenza you have to fly back they want to test you.” Meanwhile, my mom was getting married in two weeks.

[After the audition] my husband came home and I was like, “You know what, I’m giving up acting, this is just too hard.” I’m just yapping, in my moment, and I get a call, and it’s my team telling me, “You got it.” And I can show you the Snapchat. My husband shot the moment I got it. That was on a Tuesday, my mom’s wedding was Friday, and I had to be in New York shooting on Monday. And then a blizzard comes in. And then I do it all — my mom’s wedding in Santiago, fly back, the blizzard comes in, I get stuck in Miami, finally make it here. And I’ve been here since.

WWD: You’re married to the director Eli Roth. How did you two meet?

L.I.: That’s how I know we’re meant to be — the randomness of the world. My career had just started peaking, and Eli comes down to Chile to film a movie, after “Inglourious Basterds.” The director who discovered me, basically, was really close friends with Eli. He was like, “Eli, come down and do a movie in Chile, there are hot girls and it’ll be fun.” And we meet the first day [of the film “Knock Knock,” starring Keanu Reeves] and I had a small part in the movie, because his director friend didn’t know I spoke English. We had only spoken Spanish. So the first day I said, “Hi how are you?’ and everyone’s jaw dropped. I ended up getting the part for one of the roles they were missing, and it just so happened [Eli and I] spent the whole shooting process together.

L.I.: So much. My mom was a model. She’s like six feet tall; it’s stupid. I was not meant to be a model — I realized it wasn’t for me and I stopped it. I’ve always been so into playing dress up. My mom got a perm before anyone got a perm, she wore Doc Martens before anyone wore Doc Martens. And this was in Chile too. So I always had a tight-knit relationship with clothes. Mainly I liked being the center of attention (laughs.) But I did get best-dressed in Atlanta, two years in a row. In high school — when you wear the worst clothes ever. It was, like, Lacoste shirts and Ugg boots.