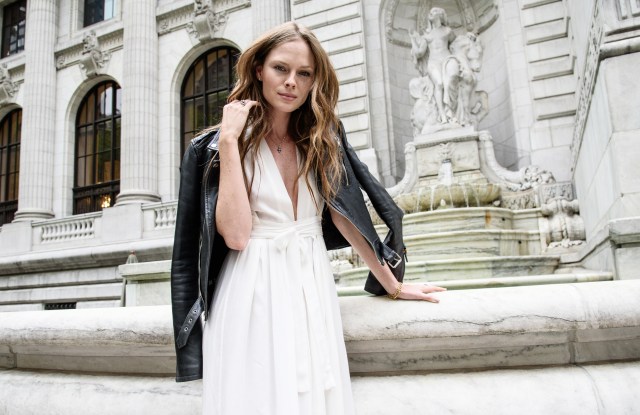 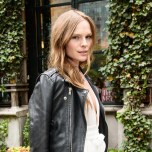 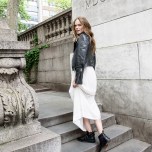 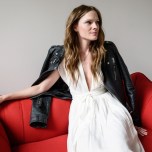 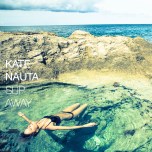 “I want music to be a new chapter in my life,” said singer-songwriter Kate Nauta during a recent photo shoot in Bryant Park. The chapter is off to a good start: she released her second single last week, “Slip Away,” and has a full-length collaborative album with Lenny Kravtiz on the horizon. But while the singer-songwriter got her start as a model and actress, music has always been her through line.

Nauta hails from Woodburn, a small town an hour south of Portland, Ore. “I’m grateful for modeling — I had an opportunity to leave home,” she explains. “My first trip was to Milan for the fashion shows when I was 15. I modeled for a long time, then I fell into acting.” She’s been featured in campaigns for brands such as Versace, DKNY and L’Oréal, and in 2005, Nauta made her film debut as Lola in “Transporter 2,” also writing a song for the movie’s soundtrack. She’s since appeared in several smaller projects. “Acting’s never been my thing,” she continues. “I was in L.A. for a long time, and I’ve always been pursuing music somehow through everything. But it got to a point where I can’t do everything, I’ve got to just focus on one thing. I’ve been so blessed: had it not been for [modeling], the door for acting would have never opened. Had it not been for acting, I may have never had the courage to do my music. I think all of those things have helped me on my journey.”

Growing up, she sang in church choirs and credits familiar radio voices of the Nineties as a major influence: country crooners Dolly Parton, Faith Hill and Garth Brooks, as well as pop heavy-hitters Mariah Carey and Whitney Houston. That soulful, vocal-driven musical carries over into her own singing and writing, and is what led her to working with Kravitz. The pair connected through a friend almost 10 years ago, after he heard Nauta cover a Roberta Flack song. They’ve worked together intermittently in the years since. She plans to release her first EP, titled “Love Loss Recovery,” in the next few months, followed by a full album with Kravitz in the beginning of 2017.

“I was always so critical and I put too much pressure on myself — that it was never good enough, or it wasn’t done, or it wasn’t finished. That’s pretty much why I never put anything out,” she explains of her delayed professional focus on music. “It got to a point where I was like, I’ve had so much fear in my life, I need to let that go and be bold. I just have so much material between Lenny’s stuff and my own. It’s all coming out.”

She plans to release her work song by song. “There is less pressure that way, and you have more control of it, too,” she says of her approach. “I’ve had a vision for my music for so many years. I feel like my music’s different, and I feel like people are longing for that a little bit…it’s real and I think people are hungry for that. I tell stories through my songs.”

Nauta draws from her experiences — her struggle with eating disorders; a family member’s drug addiction — and shares stories around the songs during her live shows. That approach has allowed the crowd to connect with her material on a more personal level. “So many people after [the shows] are like ‘I feel like you were singing directly to me,’ and I feel like that’s such a gift, and I don’t take it for granted,” she said. “I just pray that that’s what happens with my music. I tell my story, but maybe I’m touching on your story, too.”

Nauta will perform at the Surf Lodge in Montauk this Friday and at Rockwood Music Hall on Aug. 30.