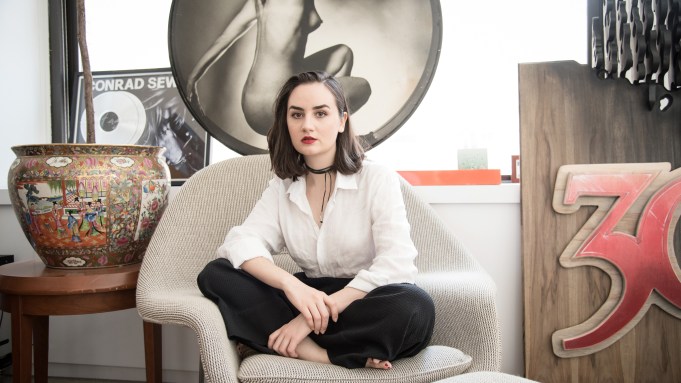 Meg Mac is of a generation of artists for whom the reins are in their own hands. The 25-year-old Australian singer-songwriter earned radio play after creating an artist profile online and syncing up a song, back in early 2013. Since then, she’s entering the U.S.’s consciousness, touring with D’Angelo in 2015, playing SXSW and, this past weekend, performing at Governors Ball on Randall’s Island. As she tells it, “It all started for me on the Internet.”

The artist, née Megan McInerney, is a native of Sydney who, after a stint in Perth for university, moved to the more musically driven Melbourne. “I always just felt like I needed to go there after uni, and all my family lives in Sydney, so I kind of wanted to be by myself in a city and start life,” she says from a couch at her label’s Midtown office.

Once the songs were written, she needed to, of course, find a way for them to reach people. “I saved up my money, and I had this one song I wanted to record,” she says. “So I went and recorded it, and then I uploaded it to [the Australian radio station] Triple J’s web site for unsigned artists.”

She had graduated from university in 2012 and was moving to Melbourne when she got news that her song would receive airtime. “It was weird. I had to get my car from Perth to Melbourne, and I had no reception, and I was driving into Melbourne and my reception started coming back up, and my phone went off with the e-mail,” she says. “And that was my first night in Melbourne. So I was like, ‘Yes, I was meant to move to Melbourne.’ ”

Her sound is driven from “lots of pop stuff,” as well as the Van Morrison and Ray Charles she grew up on, and the Edith Piaf she got hooked on while studying French. Playing for American audiences is still a new challenge for her. “I’ve been supporting other artists, so it’s been their show, so that’s been really different because [audiences] definitely don’t know who I am,” she says. “It’s exciting because it’s kind of like a blank canvas. No one has thought about what I’m going to be like yet.”

Her experience of touring with D’Angelo opened her up to the art of stage performance. “I came home totally rethinking how I wanted to be onstage,” she says. “He’s so good at interacting with the audience, and he’s got such a good stage presence, really powerful. He was so confident. I was inspired to try to make it more of a show that people want to watch.”

She’s achieving this, in part, through dress. “I always feel more confident when I am wearing a costume — it’s kind of like a mask,” she says of her onstage look. “It’s easier to seem a bit more dramatic when I’m wearing something a bit more dramatic.”