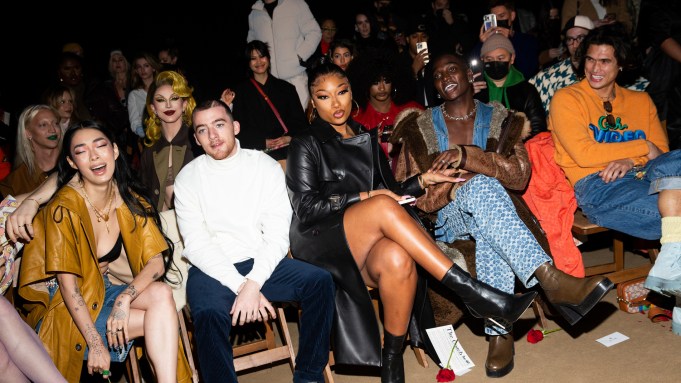 Coach drew their now-expected cast of cool on Monday afternoon for their latest runway show.

Rapp, one of the main four stars of HBO’s hit new series “The Sex Lives of College Girls,” was dressed in a Coach menswear ensemble, featuring chunky pink boots, an oversized blazer and plenty of pins on the collar. Those used to seeing her as preppy Leighton on the show would’ve done a double take, but she says this look is much more her, in fact.

“My personal style is like a five-year-old boy. Skater, five-year-old boy,” Rapp said ahead of showtime. “But honestly this is pretty me — this is the most ‘me’ thing that I’ve worn for a work thing in a long time. I love a boot.”

With her own style being “completely and utterly f–king different” from Leighton’s, she’s able to get into character more easily as soon as she gets into the costumes.

“I’m going to stay very far away from it,” she said of Leighton’s looks. “But it showed me what I actually really like to wear. Because you know when you put on clothes that are not your style and you’re like ‘cool, I know who I am — it’s not this. But I know who I am.’ But it helped me get into character because I was like ‘this is another person.’”

The overwhelmingly positive reaction to the show — and a greenlighting for a second season — was a shock to Rapp.

“It’s very exciting, it’s also very humbling and sweet. Sometimes [I feel like] my mom and my grandma are the only people watching, so when everybody was like ‘the show is really great’ I was like, oh that’s nice! Cool!’” she said.

The second season starts shooting in Los Angeles, where she’s based at the moment, using the in-between time to work on a music career.

“It’s like in the lane of ‘It’s not pop, but it’s not R&B,’” she said. Inspirations sonically include Frank Ocean, Jazmine Sullivan and SZA, with Ocean doubling as a style icon.

“I’m like, put me in a hoodie and some Dickies and that’s it,” Rapp said.