Melania Trump Flies Burberry Flag as She Touches Down in Britain

The President and members of the Trump family arrived in London on Monday morning, kicking off a three-day state visit to Britain.

By Samantha Conti and Rosemary Feitelberg on June 3, 2019
View Slideshow 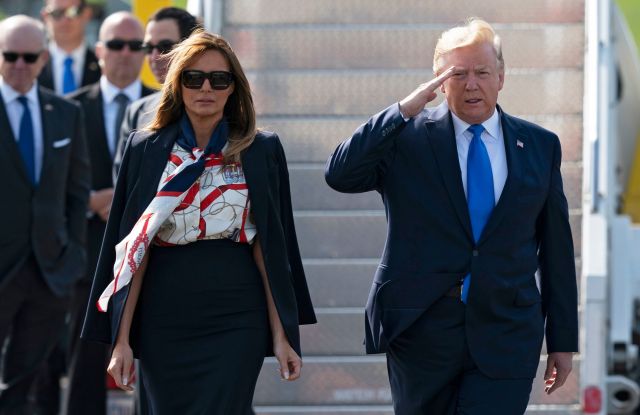 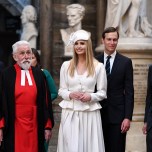 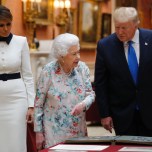 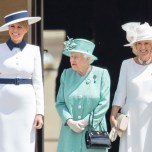 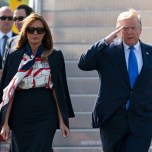 LONDON — First Lady Melania Trump nodded to Burberry — and to Britain — with a red, white and blue, reissued archive print silk blouse and scarf from the brand at the start of a three-day state visit. She paired the ensemble, printed with the words “Society by Burberrys,” with a navy blue, high-waisted skirt suit.

The couple has an action-packed three days ahead, including multiple appointments with Queen Elizabeth II.

Just after midday, FLOTUS arrived at Buckingham Palace, wearing custom white Dolce & Gabbana dress with a navy border at the waist and the hemline. The white dress is buttoned with a navy belt, while the coordinating border on the Hervé Pierre-designed hat is made of the same fabric as the dress.

She topped off her look with a flat white hat designed by Pierre, her stylist who is also a designer. Pierre has said more than once that his collaboration with Trump is rooted in protocol, etiquette, weather, customs and often practicality for an event-laden schedule. 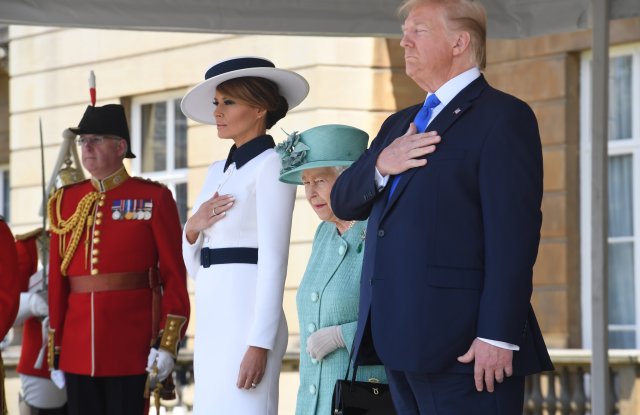 The Trumps received a royal welcome at Buckingham Palace with a Guard of Honor in the garden and a gun salute fired from Green Park ahead of lunch with the Queen who wore an Stewart Parvin ensemble with a Rachel Trevor-Morgan hat, according to a White House pool report.

For today’s ceremony, the Duchess of Cornwall donned an all-white Anna Valentine outfit with a hat by Philip Treacy, according to the pool report.

Later this afternoon the First Couple are expected to tour Westminster Abbey with Prince Andrew, and lay a wreath on the grave of the Unknown Warrior. After tea with Prince Charles and Camilla, the Duchess of Cornwall at Clarence House, the Trumps will have a reprieve before tonight’s main event, dinner in their honor at the palace.

Trump brought a few of his children for his first official state visit to the U.K. (Ivanka and her husband, Jared Kushner, will be in the mix.) 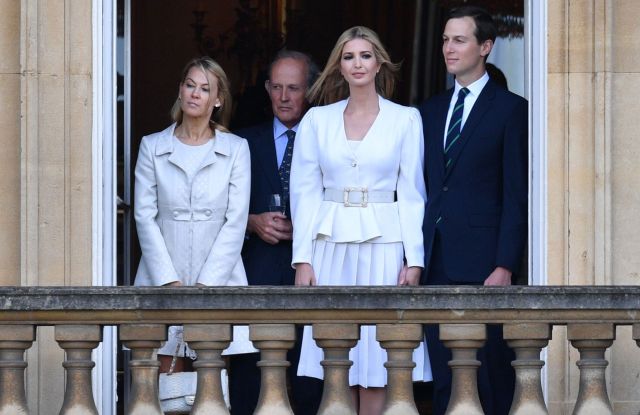 Trump jump-started the trip to London with a series of insults aimed at one of his nemeses, London Mayor Sadiq Khan.

No sooner had the President landed at Stansted airport in London than he began tweeting about the mayor, one of his many vocal critics. He called him “a stone-cold loser,” and accused him of doing a “terrible job” as mayor.

Anti-Trump demonstrations are set to take place across the U.K., and the giant, inflatable “Trump baby” balloon will likely be hoisted over Parliament Square during this visit. The balloon, an initiative supported by Mayor Khan, was flown over the square last July during Trump’s brief visit to the U.K.

Politics alone would make this week’s state visit to the U.K. a spectacle in itself. Iran and climate change are among the areas of dispute between the two world powers, while Trump’s meeting with outgoing Prime Minister Theresa May will be a swan song, of sorts.

There are rumblings of meetings with Boris Johnson, whom Trump has endorsed as the next leader of the Conservative party, replacing Theresa May, and with Brexit cheerleader Nigel Farage, whom the President said should be in charge of Britain’s ongoing negotiations with the European Union.