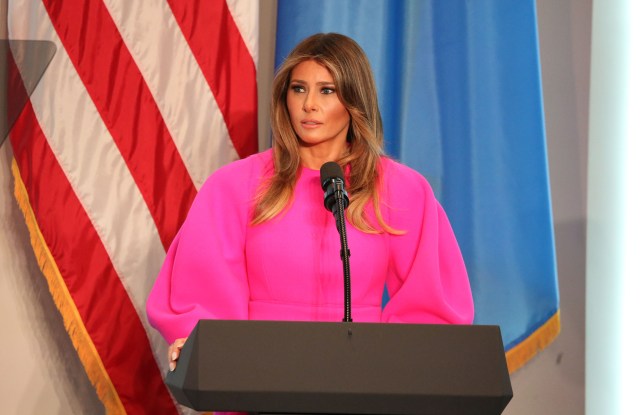 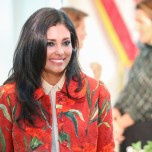 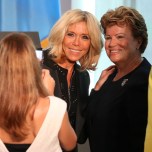 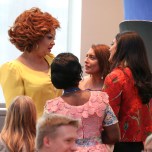 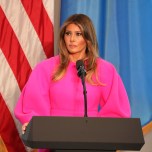 Less than 24 hours after President Trump hammered home his stance on North Korea at the U.N. General Assembly, First Lady Melania Trump delivered an unwaveringly up-with-children message that warned against hazards such as bullying, poverty, drug addiction and human trafficking. Speaking measuredly at the luncheon she hosted at the U.S. Mission to the U.N., FLOTUS was bold in her attire — a hot pink Delpozo coat and Christian Louboutin stilettos.

In what was the closest Trump has come to spelling out a directive for her East Wing office, she said, “No children should ever feel hungry, stalked, frightened, terrorized, isolated or afraid with nowhere to turn. We need to step up and come together to ensure that our children’s future is bright. In the coming months, I hope to reach out to each one of you here today to call upon your for your support and guidance, and [I] look forward to joining you in collaboration to support and educate our next generation.”

“I’m asking leaders on social media, whose target market for their products and platform as children, as well community and educational leaders to join me in this fight for the hopes and dreams of our children,” she said.

Nearby at the head table, FLOTUS had a captive audience in fellow First Ladies Brigitte Macron of France, Sophie Grégoire Trudeau of Canada, Gloria Zuma of South Africa, Emine Erdoğan of Turkey and Jenni Haukio of Finland as well as Marijcke Thomson, wife of European Council president Donald Tusk among the 100 or so guests in attendance.

Whether by chance or intention, the First Lady chose the striking hot pink that thousands wore for the Women’s Marches across the U.S. in January. Delpozo was not a new choice for Trump, who wore a striking sleeveless navy dress with futuristic design from the label during a state visit to Poland earlier this summer. And in August, her choice of a cheerful yellow and white Delpozo maxidress reportedly became a sellout for the designer company.

Poised as she was in her political role with the American and United Nations flags behind her, Trump said from the start where her heart is. “The most important and most joyous role I have ever had is to be a mother to my young son,” she said.

As attendees like Stephanie Winston Wolkoff and Rachel Roy listened attentively, FLOTUS said the choices made about how to raise and educate our children will provide the blueprint for the next generation. “We must teach each child the values of empathy and communication are at the core of kindness, mindfulness, integrity and leadership, which can only be taught by example,” she said. “We must remember that they are watching and listening so we must never lose an opportunity to teach life’s many ethical lessons along the way. As adults, we are not merely responsible, we are accountable.”

In thanking guests, Trump hinted at things to come telling them how much she is looking forward to working with them on behalf of the world’s children. “God bless our children, God bless our nations and God bless the United States of America.”

And with that, she stepped off the podium to join a beaming Macron for lunch.