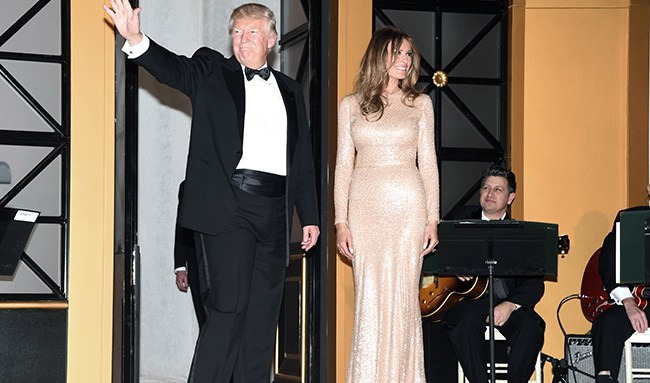 For her first inaugural weekend appearances Thursday, Melania Trump chose a shimmery gold dress from Lebanese-born, New York-based Reem Acra for a candlelight dinner at Union Station and earlier in the day she appeared in a Norisol Ferrari ensemble for a wreath laying ceremony at Arlington National Cemetery with the president-elect.

Acra, a native of Beirut who has also lived in Paris and Hong Kong, is known for her refined, often intricately crafted eveningwear that draws from a diverse range of influences. Trump decided on a high-neck, long-sleeved gown with glistening allover pale gold embroidery that one New York designer and longtime family friend of the Trumps, who was in the crowd, described Thursday night as “magnificent.”

“The First Lady-elect is wearing the renowned international designer, Reem Acra, to celebrate the 58th presidential inauguration at a candlelight dinner with her husband, President-elect Donald Trump, and their supporters,” a spokeswoman for Trump said Thursday. “Mrs. Trump appreciates the well wishes she has received from around the world and looks forward to participating in the events of the next few days along with the American people.”

In an interview Thursday, Ferrari said her first thought that morning was, “God, I hope we can be a less angry nation.”

Addressing the issue of designers who have publicly said they would refuse to dress Trump, Ferrari said, “I am absolutely opposed to discrimination in any way. I wanted to give her her own voice. Empowering women is all that matters to me. I do not discriminate whether for race, religion, color of skin, sexuality, political affiliation — what have you. No, I do not believe in it in any form.”

Ferrari continued, “I really saw a person who is being misunderstood who is being scrutinized. She’s a woman and a mother and I am pro-woman. That at the end of the day is very important to me — equality for women and for all human beings. If that’s what I really believe, I had to do it.”

Ferrari declined to say how she voted in last year’s presidential election. “I don’t believe that my political affiliation has any relevance in this appointment. The only thing I can say is that my biological family paid a very heavy price for this nation and that’s why I did this,” she said.

In a statement released by Melania Trump’s office Thursday, the designer said, “I was honored to dress the First Lady of the United States for her visit to Arlington Cemetery. Throughout American history, our military personnel have faced difficult circumstances with courage and bravery. The men and women interred at Arlington gave the ultimate sacrifice for our country, as did their families who lost loved ones. We owe them our reverence and support.

“Mrs. Trump’s visit to Arlington was particularly poignant for me, as my biological father is a wounded veteran. His experience, and the lifelong disabilities he sustained, affected my family deeply. I have immense gratitude for all our armed forces and hope we can move forward with the intention of peace and healing for our country and the world,” the statement read.

Ferrari was connected with Trump through her senior adviser Stephanie Winston Wolkoff, who has been collecting the downtown designer’s pieces for years. Her husband Lawrence Lenihan, founder of Resonance, is her business partner. From their first meeting shortly after Thanksgiving, Trump was clear about wanting a “commanding, military-esque coat for today’s wreath laying ceremony at Arlington National Cemetery and I happen to make one. It’s my strength — jackets, coats and outerwear.”

Designing the bespoke New York made stretch cashmere ensemble was no small feat. She said, “It’s been scary to make sure that I get it right, that I do my best. It’s a part of history.” (Her efforts must have measured up with Trump, since an ankle-length blue and gray cashmere and alpaca “Commander” coat was also ordered.)

Not surprisingly Trump knew just what she was after for this solemn occasion. Ferrari continued, “In quiet, you can feel her kindness. She has an air of grace. That is hard to describe.”

Asked what today means to her on a personal level, Ferrari composed herself and said, “Wow…I really don’t want to get caught in the crosshairs of this. I did this for women. I believe the unity of women is the most important thing there is to talk about in the world because without us they have nothing.” 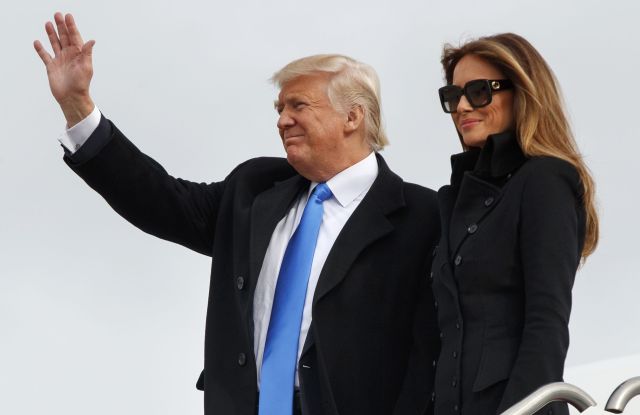 An American citizen, Ferrari said she doesn’t know a great deal about her family history. “I was given up by both of my biological parents. The only thing I do know is that we were invited here. We were not immigrants who ran underneath some fence to get through,” she said, adding that her chemical engineer grandfather was invited to work in the U.S. where he was responsible for 150 patents. “All I know is that I’m Colombian and Venezuelan, and I’m fortunate to be alive.”

Ferrari said, “It’s an honor when any woman chooses me for her wardrobe. It’s so important for me to arm woman in this world. A conversation that should never be relevant is, ‘What is she wearing?’ because it is never asked of men. We’re constantly being scrutinized for our intelligence, our sexuality and what we wear. To empower women means everything to me – to field this world that is unfair to us.”

With an afternoon medical appointment, Ferrari didn’t plan to watch the wreath laying ceremony. “I’m going to the doctor and taking care of myself, which is something that women generally don’t do. I’m going to try to do a little self care.” she said.