Twenty years before she emerged on the worldwide stage as the first lady to be, Melania Trump was an ambitious young model determined to make a name for herself. 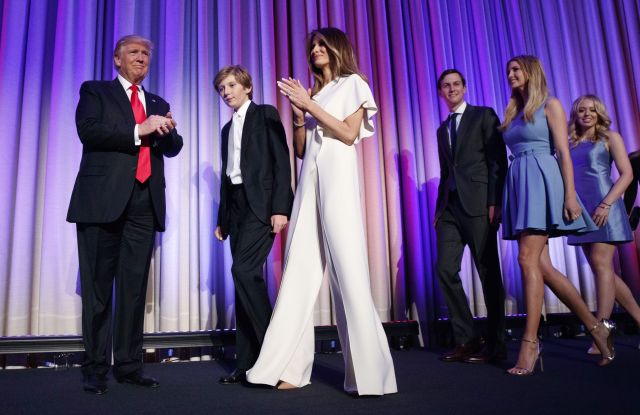 As emboldened as Donald Trump is in blasting his views, his wife Melania would appear to be the antithesis. But the two might be on even ground when it comes to determination and steely work ethic.

Having shared a Paris apartment with Melania Trump in the mid-Nineties at the dawn of their modeling careers, Victoria Silvstedt described her as “very determined, very ambitious, so strong-minded, very Slovenian and such a good person.” Trump was modeling for Marilyn Gauthier and Silvstedt was at Metropolitan. “We were just starting out together. At the beginning of your career, you would run to 12 castings a day with your model book, competing with hundreds of girls at each casting. We basically would spend the day on the Métro, on the subway underground. This was the time before cell phones. We were in a different country without speaking the language,” Silvstedt said. “It’s not easy to move in with a stranger coming from two different countries. We really, really got along very well. She would never go out and want to party. She was very determined, very serious in her work.”

Reached Friday in Monaco, Silvstedt, a European TV commentator, part-time model, prosecco entrepreneur and swimwear and lingerie designer, said they lived together for a year and have subsequently only run into each other a few times in New York. “She really wanted to work hard and make it. She probably didn’t come from the richest family in the world. She really wanted to fight and work and help her family like every other person who’s got a career and is working their way up. It was a platform for her. Ambitious and a fighter — that’s how I remember her the most. She never gave up — that’s for sure. I could see in her eyes that she would make it.”

“I have only amazing things to say about this woman. Wow! She is a really special person, very kind,” Silvstedt said. “If you have her as a friend, you can trust her.”

Recalling their early days, she said, “When you move to Paris, the first thing your agent tells you is, ‘Lose weight, lose weight. Don’t do sports.’” As an athlete, and former competitor on the Swedish ski team, that was an adjustment. “I was always very muscular. It was a tough transition going from the beauty queen [Miss Sweden] with a sporty and healthy look to Paris where they want to starve you. They said, ‘Don’t even take the stairs because it will make your legs big.’ It was quite a culture. When you’re young, you take all of that seriously.”

As young models, they often ate at home together, making simple salads like tuna. “Every time we ate something we would say, ‘Now we must work.’ We used to run up and down the stairs to burn it off. We were very determined,” Silvstedt said. “We didn’t care that they told us not to build up muscles because we had to burn the calories.”

Describing Trump as “stunning, gracious and real class,” Silvstedt said Trump will take on the role of first lady “very, very well.” Asked if she plans to reach out to Trump, Silvstedt said, “No, I’m not that kind of person. If I see her — well, it’s going to be hard to see her now [laughs.]”

“Melania was very high-fashion. She will be a beautiful first lady — that’s for sure. I’m sure a lot of designers want to dress her and will fight to dress her,” Silvstedt said. “My mom came to visit us once for a week in Paris. She told my mom, ‘One day, I will be famous like Sophia Loren.’ Melania’s style icon was always Sophia Loren. That was the idol she had in her life — the look, the beauty, her mystery,” Silvstedt said. “That line hit me so hard yesterday when I saw her at the White House. I thought, ‘Wow — there she goes.’ She has showed me. She must have had that inner strength knowing that something bigger was about to come. I don’t know — unbelievable.”